Let the music play: Ensemble singing in a pandemic

Music ensembles in India are preparing to restart the music—safely 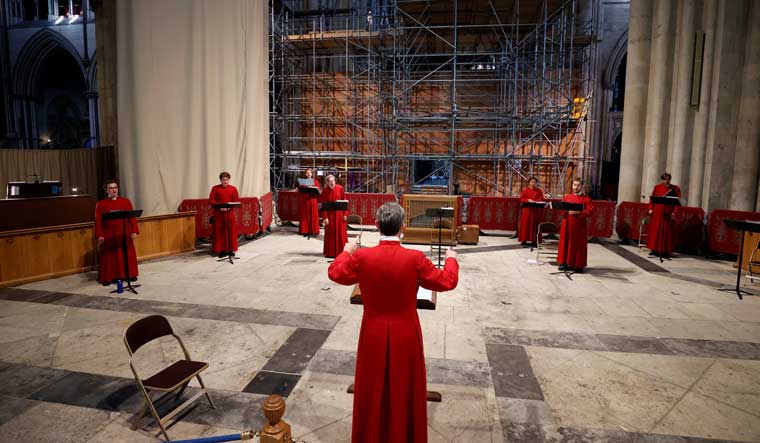 Representational image: The choir at the York Minster Cathedral is seen rehearsing before their first performance since the outbreak of the coronavirus disease (COVID-19) in York, Britain | REUTERS/Phil Noble

Researchers from Lund University in Sweden recently urged singers to maintain social distancing while performing their art. A recent study found that projection of aerosol particles and droplets is high while singing, particularly for "loud and constant-rich singing".

The letters 'B' and 'P' are supposed to be the biggest aerosol spreaders. Aerosols are fine liquid droplets or solid particles in the air and activities like choral singing, concert singalongs, chanting during sporting events or any kind of group singing are feared COVID-19 vectors.  The louder one sings, the more particles they spread, according to the aerosol specialists at the Swedish university.

William Richmond, Shillong Chamber Choir's lead singer, was well aware of the risks posed by ensemble singing right from the early days of March when the novel coronavirus outbreak was much more serious in other countries. India's premier choir group had begun cancelling their shows across the country that month, up until the time when the national lockdown was imposed in the last week.

"At the SCC, we were preparing ourselves to take this very seriously from the start. Since then we have made it a point that none of the choir members socialises anywhere. We are not just singers, we are torchbearers. We have to lead by example," says Richmond as he points out how choral singing venues have been COVID-19 vectors in other parts of the world.

Such strict precautionary measures have allowed them to continue with rehearsals, including outdoor rehearsals in smaller groups.  Following these safety standards, remote rehearsals and voice care measures,  the choir group had released two viral songs in the first week of May ‘Sar Jo Tera Chakraye’ from the 1957 film Pyasa and the ‘The Lonely Goatherd’ from The Sound of Music. In the middle of the lockdown in April, the choir members also started a special home delivery service for the sick and elderly called Uncle’s Home Delivery. "That also allowed our group members to stay in touch," he says.

Now SCC, within the next 10 days, will launch a brand new, 1,000 sq ft studio space dedicated exclusively for virtual broadcasts.

"It’s going to be a massive space where we can spread out. It will have air purifiers and proper ventilation. We have commissioned a production house to build it here in Pohkseh. It is probably going to be a one-of-its-kind facility in the country," says Richmond about the temporary structure with trussing, built to be soundproof.

This digital concert hall will now be used for all their performances as a group; upcoming shows in the new space are now lined up to be broadcast in Singapore, Philadelphia and Kolkata.

"Any ensemble singing is a risk at the moment. But we have to learn to adapt and reinvent ourselves as artists. Art and music have always been an immense source of healing in every major incident in human history, especially wars and climatic disasters," says Richmond who does rue the absence of a real audience to interact with.

The Symphony Orchestra of India (SOI), based at the National Centre for the Performing Arts (NCPA), Mumbai, is India’s first and only professional orchestra. They typically don't have singers in their ensembles, but the risks in congregating, rehearsing and performing persist. Marat Bisengaliev, music director at SOI, does not see a problem working with the entire orchestra with all the safety standards in place.

"Of course, there is a bigger risk with the wind instruments in spreading the virus because of the air projection and as it’s impossible to wear masks while playing them, but even so, there are ways to solve this too. I strongly believe that the risk of infection at rehearsals, concerts and other cultural events is not more—perhaps even less—than any other areas where public gathering is permitted," says Bisengaliev.

"We have to adapt. The rehearsals are carrying on in smaller groups. Online teaching is more regular and for longer duration than one-on-one teaching. We are ready for orchestra performances with all required guidelines and I can’t wait for live music to resume," says Bisengaliev.

While open-air theatres have been allowed to operate with a maximum capacity of 100 people from September 21, no dates have been announced for the reopening of closed auditoriums and concert halls.