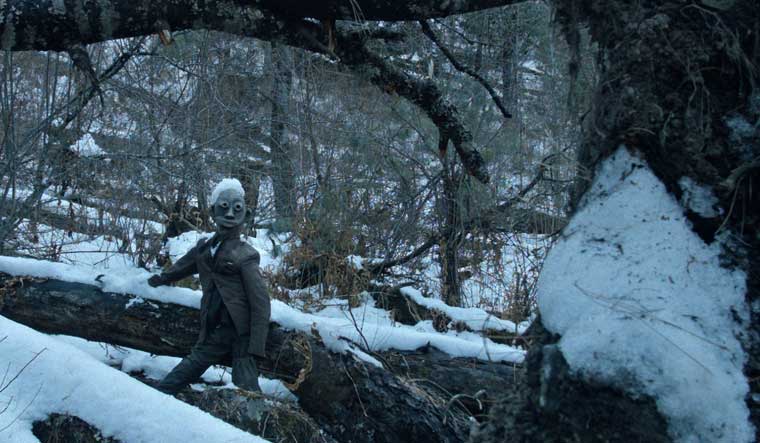 A screenshot from the film 'DADYAA: The Woodpeckers of Rotha' | Pooja Gurung & Bibhusan Basnet

How do you populate a village perched on a mountainous slope without much of a human presence? In the early 2000s, Tsukimi Ayano returned to her tiny native village of Nagoro in Japan's Shikoku island to tend to her elderly father. She made a scarecrow doll in the likeness of her father to scare off birds bent on destroying her newly planted garden. Soon, dolls spun out of cloth started to appear in farms, fields and bus-stops across the sparsely populated village.

By late 2019, Nagoro had more than 300 dolls carved as lookalikes of former residents, with less than 30 human dwellers in the village at the time. This bewildering exercise in repopulation was also captured in a 2014 documentary short called Valley of Dolls by Fritz Schumann.

There's nothing new about migration taking place from remote villages in hill areas. Lack of education and health facilities, apart from the search for a better livelihood, have created "ghost villages" in the upper reaches of hill towns—abandoned and unmanned. In 2017, a commission set up by the Uttarakhand government to study migration patterns in the last decade found that over 700 villages in the state were completely deserted and more than 1.19 lakh people had left their villages in the same time period.

But recent reports have pointed out how job losses during the lockdown have generated hopes of reviving "bhootiya" villages back to life. Data released by Uttarakhand's Rural Development and Migration Commission (RDMC) states that as of April 23, some 59,360 people have returned to the ten hill districts of Uttarakhand. Of them, Pauri Garhwal and Almora—two of the worst migration-hit districts—saw 12,039 and 9,303 former inhabitants, respectively, come back from the cities and plains.

If an artist were to respond to the loneliness of a village bereft of a sense of community, it could range from the otherworldly to the life-affirming. Three years ago, the widely covered ‘The Wise Wall Project’, an initiative by Project FUEL and FUEL Foundation, sought to paint the walls of the remote, 600-year-old village of Saur in Uttarakhand to soften the blows of excessive migration.

On The International Museum Day - May 18, 2019, the Wise Walls of Saur & Khati have joined the prestigious gallery of Google Arts and Culture ( @googlearts)
Pay a visit, absorb the art and let the colors warm your heart here https://t.co/NDrOqMek3n pic.twitter.com/D78G4TVz61

The latest example of a ghost village's poignant transformation into art comes from Nepal. In a video work being shown at Para Site’s ongoing two-venue group show 'Garden of Six Seasons' in Hong Kong, Pooja Gurung and Bibhusan Basnet from Kathmandu frame a somewhat similar experiment in the highlands of western Nepal where, in a tiny village of Jumla, an old couple grapple with the dilemma of leaving or staying back after the departure of their only friend. The video is shot at Chauki village which lies near Haat Sinja and Rotha Chaur situated on the border between Jumla and Mugu in the highlands of Western Nepal.

The old couple, Atimaley and Devi, live in a small village and are suddenly the only ones left there with the unannounced departure of a close friend. "During the Maoist insurgency (1996-2006) in Nepal, over 17,000 people including civilians lost their lives, thousands got injured, hundreds of people disappeared and hundreds of thousands of people were displaced, especially from rural villages like Jumla and Mugu," says Sheelasha Rajbhandari and Hit Man Gurung, co-curators of the upcoming Kathmandu Triennale 2020 from where some of the works are being showcased at Para Site as a precursor.

"The long history of repression, continuous political conflicts, unstable governments, complex social caste and class structures, unemployment, the influence of globalization and high demands of low-wage labour forces in the Gulf countries and Malaysia, are the main reasons of both internal and external migration in Nepal. Many villages have been completely abandoned by young people," say the curators.

Just like in the Japanese village, dolls filled the street corners of the deserted village, Julma has protective wooden effigies or ‘dadyaa' which are made as offerings to local deities but often memorialize ancestors. The doll motif is further extended with the use of Nepal's illustrious tradition of ceremonial masks in the film.