‘Thinking of Him’ explores Tagore’s relationship with Victoria Ocampo 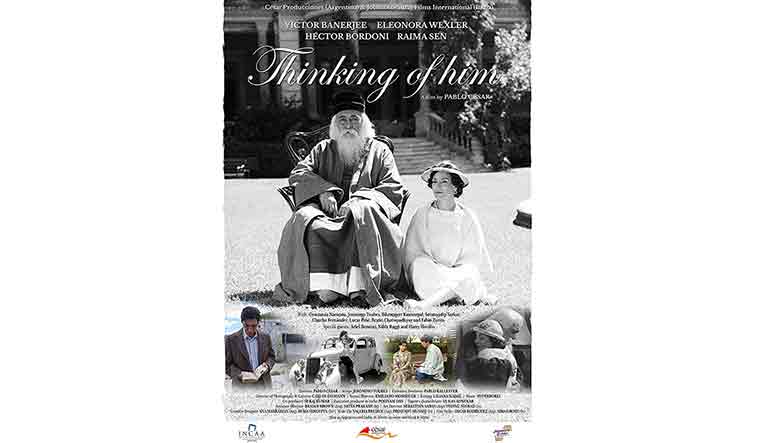 “Latin American ladies have a special way of showing their affection”, says Tagore. The lady is Victoria Ocampo, his Argentine admirer, who gifted an armchair to take to India from Buenos Aires. But there was one problem. The chair was too big to go into Tagore’s cabin in the ship. But the strong-willed Victoria would not give up. She told the captain of the ship to break the door of the cabin and enlarge the entrance to enable the chair to go into the cabin. It was Ocampo who arranged a special two bed room cabin for Tagore through her contact. This was what impressed Tagore to make that comment. Tagore used to sit on that chair for about two months during November-December in 1924 when he stayed in Buenos Aires as Ocampo’s guest. That chair is still preserved in Shantiniketan.

In his last years, Tagore used to relax in that chair and even wrote a poem about it in April 1941, just before his death the same year.

Yet again, if I can, will l look for that seat

On the top of which rests, a caress from overseas

I knew not her language

Yet her eyes told me all

A message of pathos

When she got the news of Tagore’s death, Ocampo sent a telegram to Tagore’s son which said simply 'Thinking of him' (pensando en el). That’s how the name of this Argentine movie came about.

Pablo Cesar, the Argentine director and producer of this fascinating movie, has recreated the Tagore-Ocampo encounters based on the real life story. Tagore had to stop in Buenos Aires on  November 6 for medical rest while he was on his way to Peru to attend the centenary celebrations of independence. Victoria came to know about it and offered to take care of him. She mortgaged her jewellery to rent a beautiful mansion in San Isidro, a suburb of Buenos Aires, and put up Tagore there. From his balcony, he had the view of the wide sea-like Plata river and a large garden with tall trees and flower plants. Tagore left Buenos Aires on January 3, 1925 after fully recovering from his illness.

The 63-year-old Tagore was rejuvenated by the charming young Ocampo, 34, who took care of him during his 58-day stay. She looked after him with utmost devotion and had set his imagination on fire. She got a spiritual awakening and literary inspiration from the great Indian philosopher poet. The platonic love of Tagore was reciprocated by the spiritual love of Ocampo.

Who is Victoria Ocampo? Not many Indians know about her. Ocampo was also a writer and patron of letters, later. Besides contributing to Argentine literature, she went beyond her country and built bridges with the cultural and literary world of Latin America, Europe and US. She became the first woman to be admitted to the Argentine Academy of Letters in 1977. This was a special satisfaction to this Queen of Letters, who had suffered discouragement from writing by the patriarchal society when she was a young woman. Victoria founded, funded, published and edited a literary magazine ¨Sur¨ which had poems, stories, essays and social commentary of authors from around the world.

She was a fierce feminist, ahead of her times. She quit her unhappy marriage early on and lived independently for the rest of her life. She had many lovers, affairs and friends. She travelled around the world and moved in the artistic, literary and social circles of Europe especially in France.

Ocampo had read Gitanjali in 1914 and said ‘it fell like celestial dew on my anguishing twenty four year old heart’. She described Tagore´s poetry as ‘magical mysticism’. She felt powerful echoes in Tagore´s personal loving God, radiating happiness and serenity, unlike the demanding and vengeful God imposed on her in childhood. She was very excited when Tagore reached Buenos Aires on  November 6, 1924. In her own words, it was one of the greatest events of her life. She wrote in the Argentine daily La Nacion on November 9 an article “The joy of reading Rabindranath Tagore”. She was overawed by his intellect and serenity and felt shy like a child before him. She listened to him mostly and did not dare to express herself as she would have liked to do. Later she wrote an essay " Tagore on the banks of the river Plata" and a book Tagore en las barrancas de San Isidro (Tagore on the ravines of San Isidro). Ocampo introduced Tagore to her social and literary circles in the city and got his articles published in Argentine newspapers.

Ocampo was the muse of Tagore’s Purabi poems in which he called her as Vijaya (for Victoria) and dedicated the poems to her. In one of the poems, he says:

I whispered again in your ear

What is your language dear

You smiled and shook your head

And the leaves murmured instead

After his return to India, Tagore had exchanged a number of letters with Ocampo till 1940. Tagore calls her endearingly as my Bhalobhasha (love in Bengali). She always addresses him as ‘Dear Gurudev’ and signs as “your Vijaya”.

When Tagore saw Victoria for the first time, he says to himself, “When my old words die out in the tongue, new melodies burst out from the heart.” When they were together in the house, Victoria says to herself, “I am so close to you and yet utterly unhappy to know that you cannot be near me”. He wrote “Joy, I felt near you; suffering, because you ignored my nearness”.

Tagore wrote to Ocampo: " You were the only one who came to know me so closely when I was old and young at the same time"; " When we were together we mostly played with words and tried to laugh away our best opportunities”. Tagore confessed to her about his immense burden of loneliness as a celebrity and talked about the woman's love he deserved.

Ocampo poured out her heart, “Why did you go away so soon? I miss you”; ”The days have become endless since you went away"; “I am afraid you will never know how much I love you. Remember Gurudev, you have left here someone who is trying to find expression for her love for you”.

The personal meeting also turned out to be a continental encounter. Tagore wrote; “For me the spirit of Latin America will ever dwell incarnated in your person”. She responded; “You are and will always be India to me”.

The movie has two alternating parts—one, the black and white scenes of Tagore and Ocampo;  the other in colour, a modern story of Felix an Argentine school teacher who visits Shantiniketan to understand Tagore’s method of teaching. While the Tagore-Victoria scenes have come out authentically and beautifully, the other story is not as gripping and interesting. Eleonara Wexler, the Argentine actress has portrayed Ocampo admirably giving the typical look of an Argentine woman who avoided explicit expression of emotions in the early twentieth century. Victor Banerjee has interpreted Tagore with Bengali sensitivity.

For those interested in knowing more about the Tagore-Ocampo relationship, read the book In Your Blossoming Flower Garden by Ketaki Kushari Dyson based on her extensive research on the subject. The Sahitya Academy of India has published this book.

This is the second film on India for Pablo Cesar. He had earlier directed an Indo- Argentine joint production film Unicorn- the garden of fruits released in 1996. Pablo Cesar is an unusual film director among his Argentine counterparts. Argentina has produced the most number of creative films in Latin America. Many of them are introspective with strong psychoanalysis narration of Argentine characters. But Cesar likes external exploration of ancient cultures and rare traditions especially in the east. Since 1990, he has directed and coproduced 13 films with local themes in Angola, Tunisia, Cape Verde, Mali, Benin, Ethiopia, Tunisia, Namibia and Morocco.

Thinking of Him premiered at the Goa Film Festival in December 2017 and released in Argentina in August 2018. The official release to the Indian public is planned for August this year.