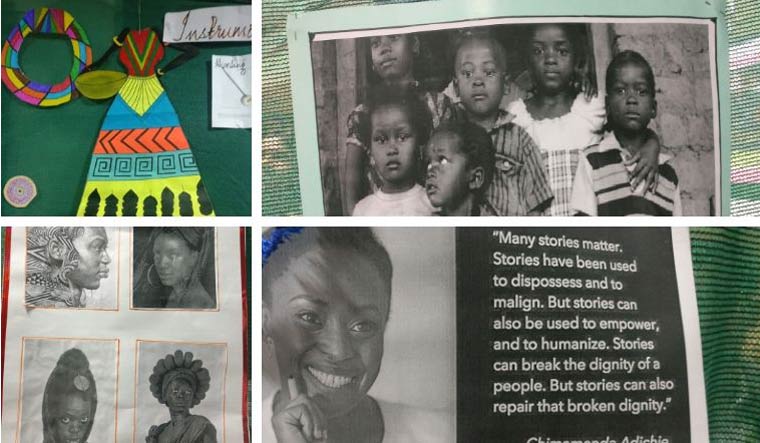 A black and white poster of a smiling Chimamanda Ngozi Adichie and a painting that shows how art was used as a tool to reinforce stereotypes and myths were among the items at ‘Ubuntu', an exhibition on African literature and culture held at St Joseph’s Evening College in Bengaluru.

‘Ubuntu’—meaning ‘I am because we are’—is a celebration of togetherness.

The exhibition drove home the fact that we know very little of the African continent and its contribution to the world.

Africa often evokes images of famine, squalor, and poverty. “It is partly because we tend to look at Africans through the eyes of the West. The neocolonial powers control what we ‘know’ and define ‘who’ we are, so much so that we know more about their history, food, and cinema than our own,’’ said Prof. Jerrin Chandan, an award-winning short filmmaker and teacher of postcolonial studies at SJEC. He curated the exhibition with the intention of helping his students break away from ''the hegemonic domination of the neocolonial powers.''

Chandan feels it is important for postcolonial citizens to “consciously break away from the domination of the West and to actively know more about the non-Western world.”

The two-day long exhibition offered a panoramic view of African literature, art, culture, and landscape. Posters and photographs gave visitors a glimpse into the chequered history of Africa.

A painting that depicts Jahangir shooting an arrow at the severed head of Malik Amber caught my fancy. It is a classic example of how art was used to fabricate and distort history. Malik, an African slave brought to India, went on to become a military leader in the Deccan region. Jahangir’s heroic deed portrayed in the painting was based on nothing but fantasy.

Ubuntu featured the best and brightest of Africa, including poets, musicians, environmentalists and statesmen. It also threw light on the origin of Siddis—Africans who came to India as early as the fourth century.