Decline of press freedom and intimidation of journalists continue unabated 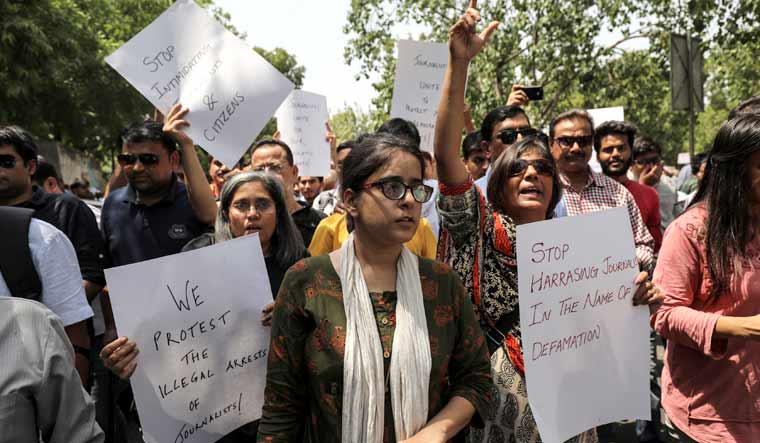 The world is becoming a precarious place for journalists, especially for independent journalists. The recent arrest of journalist Prashant Kanojia over an alleged defamatory tweet against Uttar Pradesh Chief Minister Yogi Adityanath is just one of the many instances that point to a larger picture of intolerance among the political classes. And this, is in no way limited to India. Russian journalist Ivan Golunov’s detention on dubious drug charges, and the Internet blackout in Sudan are both recent indicators of governments actively trying to curtail the freedom of speech.

Freedom House, a US-based think tank, released a report on June 4, titled Freedom and the Media 2019: A Downward Spiral. It is a collection of four essays all pointing to the death of journalistic freedom. In her key findings, senior director for research and analysis Sarah Repucci expresses both grief as well as hope.

She states that threats to freedom of press are concerning in their own right, and their influence on the state of democracy is what makes them truly dangerous. However, light can be found even in the darkest of times. Repucci states that even after long periods of repression, press freedom can always make a comeback, as “the basic desire for democratic liberties, including access to honest and fact-based journalism, can never be extinguished”.

This very hope was echoed on Monday, June 10, when journalists gathered at the Press Club of India in Delhi and organised a ‘Protest March’ to Parliament, demonstrating their support for Prashant Kanojia. Today, the Supreme Court has ordered his release, stating that it is an “endorsement of his personal liberty”.

India is replete with instances of suppressing journalists using legal as well as extralegal tools. Be it censorship, trumped up charges of defamation, unfair tax investigations or even name calling by using terms like ‘presstitutes’—coined by Retd. General V.K. Singh—when he was the MoS for External Affairs.

The relegation from the ‘fourth pillar of democracy’ to ‘presstitues’ is an indication of the worrisome state of Indian media. This was reflected in the Reporters Without Border’s (RSF) World Press Freedom Index where India slipped to a rank of 140 of the 180 countries included in the list.

The RSF’s report on India states that at least six Indian journalists were killed in 2018 in connection with their work. Their murders highlight the threats faced by these journalists, especially those working in non-English language media outlets in rural areas. It also states that during the run-up to the 2019 general elections, attacks against journalists by supporters of Prime Minister Narendra Modi increased. There were coordinated hate campaigns against journalists who spoke on subjects that angered Hindutva followers.

The Supreme Court, last year, had said that ‘Dissent is the safety valve of democracy’. If this is indeed true, we are certainly heading towards a Big Bang-esque explosion.