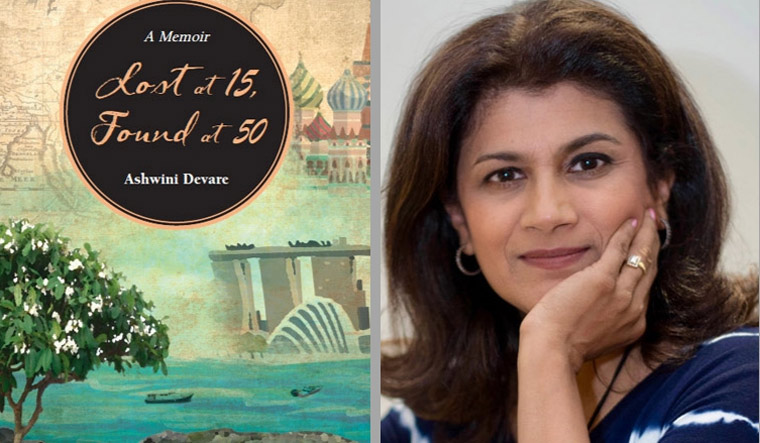 Ashwini Devare lived in five different countries by the time she was 15. Her experiences as an immigrant were not always pleasant. 'Lost at 15, Found at 50' follows the metamorphosis of Devare from a girl who was desperate to fit in to an acclaimed writer and journalist. She is upfront about her failures, to the point of being confessional, and that makes her writing all the more interesting.

What motivates you to write?

I have been writing ever since I can remember. Writing was a stress-buster for me as a child, and even today, I find writing therapeutic.

Growing up, we went with my father from country to country, (my father was an IFS officer) and in those unfamiliar, foreign environments, writing became my refuge. I would retreat into a corner and create worlds that felt more comforting and less alien than the ones we were living in. I maintained diaries for years. As a child, I was always either writing or drawing. In our home, our dining table was always the edifice for animated discussions about all the events swirling around us. All four of us, my parents, my sister and I, we would discuss politics and history with great ardour. For us, geopolitics was not something esoteric; it was very real and very tangible. These early influences not only motivated me to write, but also helped shape my interest in journalism.

I come from a family of writers, and we are a source of motivation and inspiration for one another. My parents and my sister are published authors, my maternal grandmother wrote poetry and my grandfather’s book 'A Short History of Persian Literature: At the Bahmani, the Adilshahi, and the Qutbshahi Courts-Deccan' has been regarded as a seminal study of the influence of Persian on the languages and culture of the Deccan.

‘Lost at 15 Found at 50’ is about your life, your journey. Looking back, what would you do differently, if you could live your life all over again?

Life is a journey for everyone. Like a river, we all journey through life, sometimes the terrain is scenic, other times it is rugged. Persevering through those ups and downs is the litmus test for any individual.

My childhood was a roller-coaster ride. Every three years we were flung from one continent to another. I went to schools where I was the only Indian, the only brown-skinned person. The pressure to ‘fit in’ was intense. But it made me resilient. Today, I am open to changes, to new environments, to different types of people and cultures, because of this early exposure. My family became extremely close-knit, we held hands, the four of us, to soften our landings in foreign shores. I try not to be wistful for what I didn’t have. I am filled with gratitude to have a family I can turn to in times of need.

The only thing I might have done differently, I would have liked to continue living in India, in the same geographic space, while transitioning from childhood to adolescence. There is something to be said about growing up in one community, going to the same school, having the same classmates, the same neighbours and friends. It gives you a sense of stability, it grounds you and with that comes a confidence and self-esteem that is hard to quantify.

If there is one thing that was missing in my life, it was that stability. I also miss not having those school and college friends. I see so many of my friends reviving old, forgotten friendships, and the pure joy that comes from reconnecting with people from your childhood, it is a blessing.

What was the hardest part of writing your memoir?

The voices of self-doubt in my own head were the first stumbling block—that I was not a celebrity, therefore I was not eligible to write a memoir. But once I started writing, I became ‘lost’ in those eras of the sixties and seventies, and only ‘found’ myself in the 2000s, and reliving those decades made it a thrilling ride for me. Writing a memoir is tricky because the last thing you want to do is to bore people by droning on about your life. Like in any writing, a memoir too has to be fresh, pacey and interesting. Selecting the most powerful pieces was the hardest part. That is where my training as a journalist came in handy. I was able to throw out/edit out chunks quite efficiently.

How has your life as an immigrant influenced your writing?

As someone who has been constantly on the move, and lived in so many places, the concept of home was always an abstract imagery. When that anchorage of identity is in question, it can be unsettling. For many years, I grappled with that quest for belonging, which stemmed from my nomadic existence. It has been a recurrent theme in my writings. 'Batik Rain', my first book of short stories, explored cross-cultural conflict and the protagonists were seeking anchorage in a shifting, borderless world. Once again in 'Lost at 15, Found at 50' the search for home and permanence became a leitmotif. The immigrant, diasporic experience is intrinsic to my writing; it has shaped my outlook and my identity.