On display: Rare artworks from the colonial era 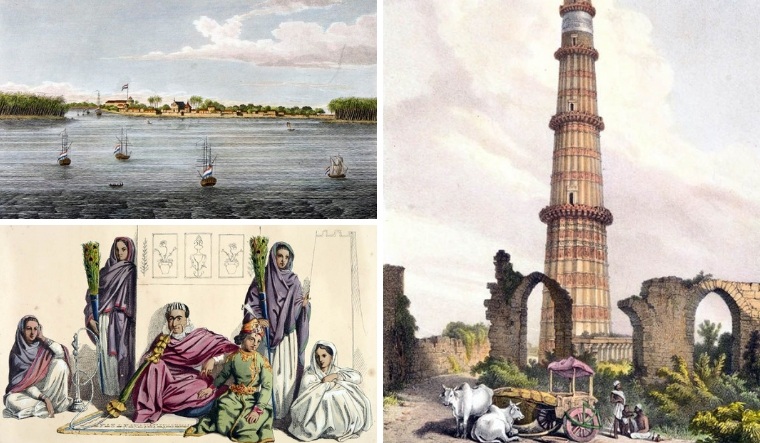 An on-going exhibition at the Cymroza art gallery in Mumbai is showcasing rare artworks from India's colonial past, including old maps, lithographs, prints, etchings, aqua-tints, engravings and books from the 16th to early 20th century. The collection, curated and conceptualised by art historian Dilnavaz Mehta, offers a comprehensive textual and visual record of the history, geography, topography, religious and social activities of 'Hindoostan,' as discovered and documented by foreigners who arrived on its shores including European scholars, artists, merchants and English officers of the East India Company.

Some of the most prominent works include, a neatly double-framed original coloured lithograph by John Luard, a British army officer and an amateur watercolour artist who sketched and lithographed his portraits and landscape views of India, including his famous sketch of the Qutub Minar in 1823 which he referred to as 'the Cutteb- Minar in Dhelie' (Delhi).

Mehta lends a pan-india flavour to her complete collection by featuring paintings and engravings of prominent Indian cities—there is a set of coloured aquatints of the churches of Madras engraved by Julius Walter Gantz in 1841, and then there are strikingly meticulous engravings of 'Cochin on the coast of malabar,' and 'Surat on the banks of the Tappee,' by J.Shury, a series of views and special points of interest of the city of Lucknow before, during and after the mutiny by D. S. Dodgson published in 1860, a series of portraits including that of the queen of Delhi and Maharaja Dhuleep Singh, of various communities in Bombay and some early Christian coverts from India by Helen Mackenzie, published 1854.

"As these works are not easily available or on view, a large number of people are not even aware of their existence. I curate this exhibition to encourage greater interest in these unique works of art and history by giving the visitors an impressive glimpse into the India of yore," says Dilnavaz.

Curated successfully for the third time in a row, Dilnavaz's exhibition is an important retelling of the nation's rich historical past between 1860 and 1930 and not just a reminder of a time gone by.