'I refuse to beg or prostitute myself': India's first transgender delivery agent 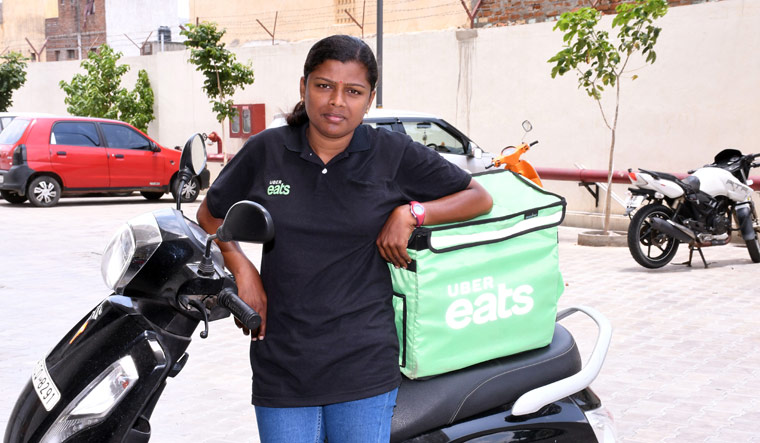 Preethisha is on a high. After years of fighting social ostracism and refusing to conform to stereotypical 'job roles' expected of transgenders, she is now finding her feet. An aspiring actress, Preethisha, a transwoman, recently joined a food delivery company to become the first transgender delivery agent.

Born male in a village in Tirunelveli, the journey has been tough for 31-year-old Preethisha. “I was around 14 when I began to realise I was different. I wanted to be a woman,” she says. The youngest of three children, Preethisha left home to explore and embrace her sexuality. During this time, she befriended transgender youngsters who helped her understand things better. This took her to Pune, where after saving up money from a few odd jobs and with assistance from the community, she underwent a sex change surgery at the young age of 15.

And then the problems started, she recalls. She was expected to return the money the community spent for her. “After I became a woman, those who helped me told me to beg on the streets, or get into prostitution.” “I refused; this was not why I had become a woman. I wanted to live with dignity, but they taunted me to stick to the 'parampara' (tradition)”. Preethisha clarifies she doesn't intend to degrade the community, and hopes things have changed more than a decade since. Though she ended up begging on the trains for a few weeks, it is from here she moved on to her first real act of self-reliance—selling key chains and mobile phone covers on the trains. “Other vendors, as well as the staff at the railway station were supportive.” This, however, didn't go down well with certain members of the community. After a stand-off with them, Preethisha headed to Delhi.

Delhi was good to me, she says. And it is here that she started to connect with her true passion—acting. Along with other transgenders, she joined the Delhi Drama Group. Amid the dance, music and props, Preethisha found a chance to merge into her identity as a woman. “Any day I would prefer to be called a 'woman', not a 'transwoman',” she says. At the theatre troupe, there was no stigmatisation—Preethisha essayed roles of mothers, female leads and other character roles. Had it not been for the infamous Delhi air that was taking a toll on her health, she would probably have stuck around for longer.

The journey in search of an identity further brought her to Chennai, which has been her home for over five years now. The city also ushered in luck and new beginnings—she pursued her acting career, and also found love. She trained at the Theatre Lab founded by Jayarao, where her dreams took wings. She has acted in a handful of Kollywood movies including Paambhu Sattai, Veeraiyan, and Vellai Yaanai, and featured as a trainer in television shows like Junior Superstar (Tamil).  The income, however, wasn't enough to keep life going. That’s when she got on board Uber Eats through PeriFerry, a start-up that generates employment opportunities for the transgender community. “We create awareness among companies, and try to place transgender persons into mainstream employment,” says Neelam Jain, founder of PeriFerry.

On a two-wheeler, Preethisha traverses the lanes of Chennai, delivering food at doorsteps. “It has been fulfilling,” she says. And what makes the struggle worth it is that she is not alone. She now has husband Premkumaran, who supports her dreams.

For Preethisha and Premkumaran, a transman, it was not really love at first sight. They had known each other and were mutual support-systems, but had never really thought of the romantic possibility of taking it beyond the friendship. It was she who proposed first. This was more of a pragmatic option than head-over-heels kind of love. “It is always better for a transwoman to marry a transman, and vice versa. There is an understanding and mutual acceptance that comes with it,” she says. Preethisha and Premkumaran registered their marriage in March; they are yet to receive their marriage certificate. They are Tamil Nadu's first transgender couple, as well as one among the firsts in the country.

At their apartment in Virugambakkam in Chennai, Preethisha and Premkumaran are building new hopes and dreams. While he is pursuing a bachelor degree in social work, she nurtures a dream of making it big in films.

“I want to set an example for other transgenders. And I want people to understand it is not a given that transgenders must beg or get into sex work. We can live dignified lives,” she says.