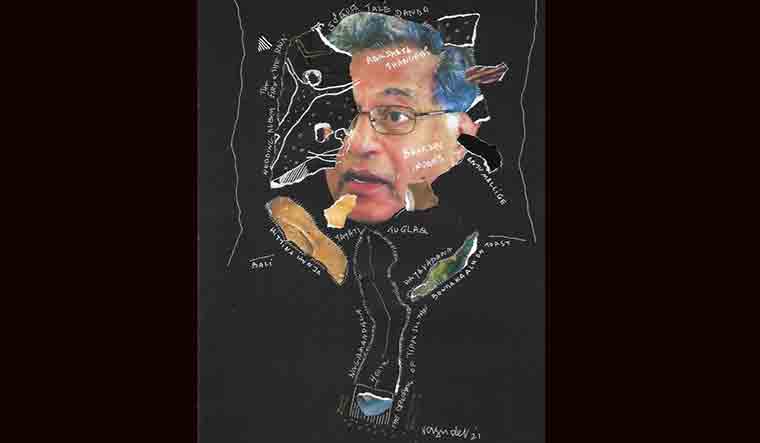 S.G. Vasudev’s collages of Girish Karnad beautifully sum up the versatile genius’ scintillating career. The collages were featured in a performance staged by Ranga Shankara recently in commemoration of Karnad on his 83rd birthday.

Vasudev shared an intense bond with Karnad, the late playwright, actor, writer and filmmaker. His friendship with Karnad goes back 58 years. ‘’When we first met, Karnad was an assistant manager at the Oxford University Press. He was astonishingly well read. He had an in-depth knowledge of poetry, theatre and even existentialism,’’ recalls Vasudev.

In 1967, Karnad got Vasudev a manuscript of Dr U.R. Ananthamurthy’s Samskara. ‘’ Both of us felt it could be made into a film. Tom Cowan, a young Australian director- photographer was staying in Cholamandal then. Cowan was very excited when he came to know about the film project. He offered to do the cinematography for the film,’’ says Vasudev. Cowan worked on the Kannada classic and won much critical acclaim for his contribution. Cowan who has several hit films to his credit still considers Samskara among his best.

Vasudev collaborated with Karnad for Vamsha Vruksha, another award-winning movie. The Cholamandal legend says his mind was crowded with memories as he made the collages of Karnad.

Collage art is no child’s play for Vasudev.  His new series of collages are endearingly playful, and yet powerful and thought-provoking. They offer layers of meaning.

Vasudev who won the National Award from the All India Lalit Kala Akademi in 1967 is best known for his Vriksha (Tree of Life) series. The 80-year-old Bengaluru based artist still seems to be obsessed with tree motifs. Trees with pearl shaped leaves growing on long, slender stems appear in his collages too, signifying life, death and what lies between.

Asked why the tree motif is so dear to him, he explains, ‘’I like tree shapes. Trees come in different shapes. Tree motifs give me scope to experiment.  You can even make human form from them.’’

When the pandemic confined him to his home studio, Vasudev began looking for something to lift his spirits up. He ended up making collages using torn bits of paper, wedding invites and magazines. He even took out images from Vriksha, his biography in a coffee table book format. His drawings added zing to his collages.

Vasudev’s collages are well thought out pieces of art and he bares his soul in them. A collage is more than just juxtaposing seemingly unrelated elements, he says. ‘’My collages don’t just happen. They are based on solid ideas,’’ adds Vasudev, a founder member of the Cholamandal Artists Village in Chennai.

Vasudev has had his share of struggles. ‘’I worked hard in my initial years. I’d do craft work along with my friends in Cholamandal and make money out of them. We hardly had two meals a day,’’ he recalls.

‘’Cholamandal is the only artists’ village in the country that has survived even after 55 years,’’ he adds as an afterthought.