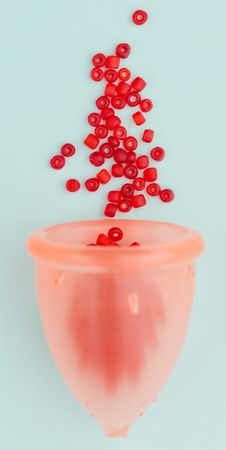 Bhoomika Sheth, 28, started a Facebook page three years ago to advocate the use of the cups. She was introduced to it by a friend in 2016 and purchased one in no time. But, it was only three months later that she “gathered the courage to try it”. After three unsuccessful attempts at insertion, she got the hang of it and has never used a sanitary pad again. “I used to be uncomfortable in sanitary pads anyway and so the cup was a welcome option,” she said. “Of course, the notion of inserting a foreign object into one's vagina was repulsive.” But the benefits are many, she added. “It is not painful and I do not have to worry about the stains sanitary pads could make,” she said. “More than anything else, it just stays there, often making me forget I am on periods. I have no itches or rashes and can travel without changing pads every now and then.”

But why move to something that has to be inserted in one's body, when there is a tried-and-tested alternative, asked Radhika Oberoi, 28, from Delhi, who works as a visualiser with a multinational company. Dr Gayatri Deshpande, senior consultant, obstetrics and gyneacology, Nanavati Super Specialty Hospital, Mumbai, said: “Most modern sanitary napkins have a film which is converted into gel particles once the menstrual blood gets absorbed into the napkin. [Also,] to make it look super white, it is actually made up of wood pulp and bleached several times. It is not paper or cloth or cotton at all. Over a period of time, the chemicals used in making these napkins can lead to irritations and infections in the vagina.”

The 121 million women who use sanitary pads produce tonnes of waste. But, should environmental concerns be prioritised over a woman's personal comfort? “To protect oneself, one must be in tune with one's surroundings,” said Deshpande. “Also, the menstrual cup is a soft product which does not damage the vagina. It does not have any side effects either. One can insert, remove and sterilise it in boiling water without any fuss and one cup can last for a good five years. It is economically viable at Rs800 for a reputed brand.”

The freedom that comes with the cup works in its favour. One could go swimming during periods, and as the blood does not come in contact with the air, there is no bad odour. But, Dr Manjiri Mehta, senior consultant gynaecologist and obstetrician at Hiranandani hospital, Vashi, said one must not get carried away by all the positive conversation about menstrual cups. “The napkin is easier for young girls to use because they are still to get the judgment about their flow. If not emptied on time, the cup can overflow and leak.” She added that the cup is more suitable for women who are sexually active because the vagina is a little dilated and the hymen is gone.