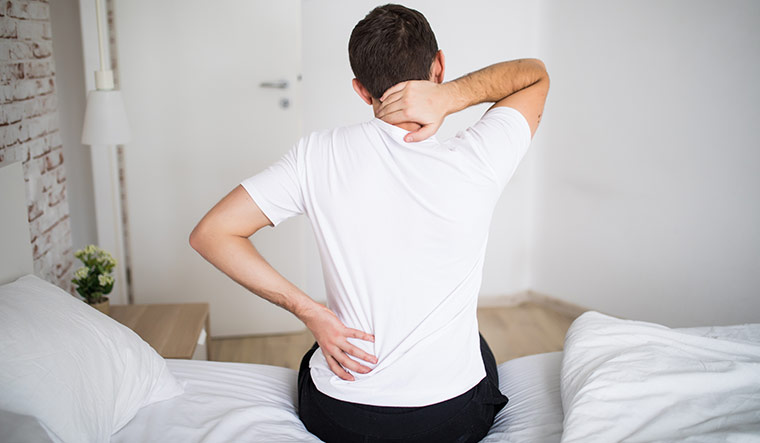 Vikas Sharma lives in Pune with wife, Alka. Now happy in their marriage, this was not always the case. Vikas had been suffering from ankylosing spondylitis (AS) for more than 10 years before getting married to Alka. However, Alka was completely unaware of her husband’s chronic back pain, till after they got married. She says Vikas could have hid his condition from her out of fear of rejection.

Prevalent among 1 in 100 of the adult population, AS is an irreversible, inflammatory, autoimmune disease, which more commonly affects young men, especially in their teens and between their early twenties and thirties. In AS, an overgrowth in the spine’s bones causes them to fuse together to form a rigid spine. A key symptom of AS is pain in the back early in the mornings, especially 30-45 minutes after waking up. If the pain lasts for 30-45 minutes every morning for 90 days or more despite taking painkillers, one could be suffering from AS. While many people living with AS have a gene called HLA-B27, which can be detected by a blood test, it may not be the absolute cause of the condition, nor does it mean that the person with the gene would definitely be affected by AS.

If left undiagnosed or untreated, the condition can severely disrupt mobility and cause damage to posture, which can bend the spine and neck to an extent that it may become impossible for one to lift their head high enough to see forward. This is known as ‘structural damage progression’. In some cases, patients can even become wheelchair-bound.

As time passed by, Vikas’s condition became worse and hindered his mobility. “I have seen him holding on to the walls and doors of our house to help him walk up until the time when he almost became wheelchair-bound,” recalls Alka. As a result, Vikas lost his job. When Alka's family came to know about it, they asked her to move out. And, Alka did. But after a few months of living apart, she came back to him and took it upon herself to help Vikas. Today, she accompanies him for all his regular visits to the rheumatologist.

Dr Danveer Bhadu, assistant professor, department of rheumatology, AIIMS, New Delhi, says that adopting biologic therapy can significantly slow down structural damage progression and improve functional status in AS patients. “Most patients tend to adopt other line of treatments that don’t show long-term results,” he says. “Fear of adverse drug effects that comes with allopathy and greater belief in unconventional medicine such as homeopathy, ayurveda and unani are still prevalent in India. Relying on alternative medicines may increase the risk of fusion of spinal bones, which could further make the patient wheelchair-bound.”

Like Vikas, Madhur is also an AS patient. What started as acute pain in his chest progressed to his lower back. It became so unbearable that he consulted a general practitioner who was unable to diagnose his condition as the result did not show up in scans and X-rays. Madhur continued to suffer, even as his family and colleagues taunted him for being lazy and not being able to carry out day-to-day tasks. The fact that he was overweight meant that he also had to endure bullying by peers.

“I reached a stage in my life when it became unbearable to listen to loved ones and peers constantly criticising me for my weight and calling me lazy,” recalls Madhur. “Nobody could really understand the hell I was going through and the constant physical pain that made the most basic tasks extremely challenging. I began to feel extremely low and alone.”

Due to the continuing pain and frustration, Madhur had no choice but to leave his job. His family eventually found out about a rheumatologist, and his condition was confirmed as ankylosing spondylitis. He was advised biologics, and within a few months of treatment his condition improved significantly. Today, Madhur is happy in his new job and has strong support from his family members.

Timely diagnosis is important in AS to curb further progression of the disease and for better management and treatment. Generally, AS is diagnosed through physical examination, X-Ray, MRI and a series of blood tests. In the initial phase, due to low awareness of this condition, patients tend to consult their family physicians, who may prescribe painkillers, anti-inflammatory drugs and disease modifying drugs to help reduce pain and inflammation—the key symptoms of the disease. While commonly used painkillers may provide relief, this is limited to the short-term. Advanced treatment options such as biologics are recommended by medical experts to slow down structural damage progression.

In addition to medical treatment, it is advisable that people living with AS consult with medical experts for regular physiotherapy exercise that is also considered important for management of the condition.