To have eggs in anganwadi meals in Madhya Pradesh, or not, is the question 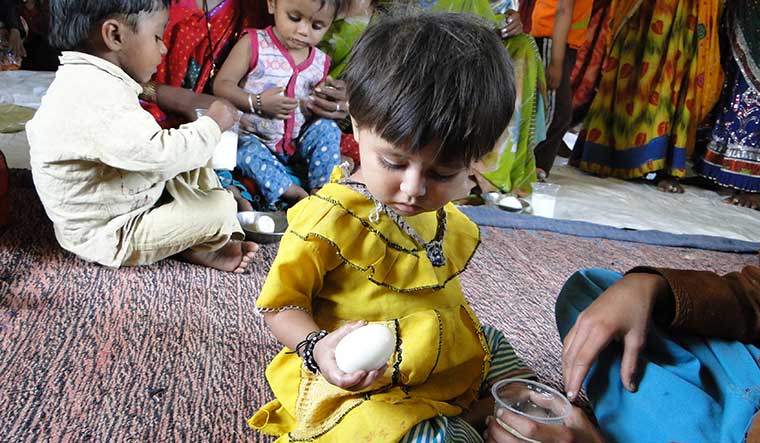 Oval delight: Children eat eggs at an anganwadi in Indore as part of a gram panchayat project in 2016.

Smiles lit up the faces of young Ramsakhi Saur and her son Sagar, four, when they heard that the local anganwadi might serve eggs. “He loves eggs and, of course, we would like him to have it,” the young tribal mother, living in Pajanpura Majra of Niwari district in Madhya Pradesh, said emphatically. Sagar's smile became wider.

“Why should we have any problem with eggs being served at the anganwadi, we relish it,” Ramsakhi's neighbour Hariram Saur said, adding that his daughter Madhu, three, laps it up happily.

Some 1.14 lakh people from 17 districts in Madhya Pradesh have already signed a petition for inclusion of eggs in anganwadi menus and for other steps to ensure food security under an initiative of the state unit of the Right to Food Campaign, an informal network of organisations and individuals.

“The petitions will now be submitted to the office of the chief minister (Kamal Nath),” Sachin Jain of the Right to Food Campaign told THE WEEK.

The support comes at the right time for the Congress government, which the opposition BJP has criticised for its plan to distribute eggs to children in anganwadis in 89 tribal-dominated blocks of the state from the next financial year (April 2020). The state government had mooted the idea a few weeks ago, and the BJP accused the government of trying to “tarnish Indian culture by forcing children to consume non-vegetarian food” and warned that it would strongly oppose the move.

Former chief minister Shivraj Singh Chouhan had nixed a similar proposal in 2015, saying that eggs would never be distributed through anganwadis as long as he was the chief minister. BJP national general secretary Kailash Vijayvargiya said that the BJP would strongly oppose the move. Leader of opposition Gopal Bhargava went a step further, claiming that feeding eggs to children might turn them into cannibals as adults.

A few months ago, similar opposition had arisen in Chhattisgarh, but the Congress government there went ahead with the move. About a dozen states have eggs in their nutrition and food programmes and some of these states, such as Jharkhand, Karnataka and Bihar, have BJP or BJP-supported governments.

“Why should we bother about what the BJP is saying? If something is healthy for our children, if something rids them of malnutrition, we give it to them,” Madhya Pradesh Women and Child Development Minister Imarti Devi told THE WEEK. “And we are not forcing anyone. We will give eggs only to children who eat them; for others, we will have other options. Like when we cook non-vegetarian food at our home and if someone does not eat it, don't we cook mattar-paneer for them? We want our children to be healthy and grow to be healthy adults.”

Anupam Rajan, principal secretary of the department of women and child development, told THE WEEK that the matter was discussed before Kamal Nath during a recent review meeting and it was agreed that steps should be taken to introduce eggs in the 89 tribal blocks. “The efficacy of eggs in combating malnutrition is well known and the malnutrition rate in our tribal areas is higher than average,” said Rajan. “Tribal families also consume eggs and it makes sense to offer the food as an option. The proposal has been given administrative sanction and is being sent to the finance department. It would then come up before the cabinet for formal approval. It should cost us about Rs113 crore annually to give eggs thrice a week in the 89 blocks.”

Rajan said that including eggs in anganwadi menus would generate livelihood options for local people who could rear poultry and supply the eggs locally. He also said that eggs should be included in midday meals at schools, especially for adolescent girls.

Notably, the government move has the strong backing not only of nutritionists, but also the people, as shown by the signature campaign. “The tribals and many other rural people are happy at the prospect of getting eggs through anganwadis as they consider it a delicacy,” said Mastram Ghosh, an activist in Niwari district.

Dr Veena Shatrugna, former deputy director of the National Institute of Nutrition, Hyderabad, said that those who oppose giving eggs to marginalised children did not have any right to occupy chairs of authority. “Eggs are the best food for children,” she said. “[It is] culturally appropriate, children love it, [it is] easy to be dispensed, and can be counted. Eggs are also regular food among 85 per cent of the population, are the best protein source, and have all nutrients except vitamin C (which you get through most fruits). We are insulting our children by keeping them starved. There is nothing negative I can say about eggs. Only thing is—don't give them to children below six months. But do our dominant caste people care about the poor? Their aggressive behaviour has even made scientists buckle in some instances, like in Karnataka. But the point is that eggs are absolutely necessary for children and there are no equivalent vegetarian options.”

According to the National Family Health Survey (NHFS-4), 42 per cent of the children in Madhya Pradesh are stunted and 42.8 per cent are underweight. The malnutrition rate is particularly higher among scheduled tribe (48.2 per cent stunted and 51.5 per cent underweight) and scheduled caste (47.6 per cent and 45.9 per cent, respectively) children, said Sachin Jain. He had written to Kamal Nath this September, asking for inclusion of eggs in anganwadis as well as in midday meals in schools.

In his letter, Jain mentions that, according to the National Egg Co-ordination Committee, eggs are one of nature's most perfectly balanced food items and are considered a complete protein because they contain all nine essential amino acids, or the building blocks of protein.

Suggested substitutes such as almonds are quite expensive, and while one egg gives around 6gm of protein, a child would have to eat 25 almonds to get the similar amount, Jain's letter to Kamal Nath says.

While other suggested measures such as giving milk can be a logistical nightmare, supplying as well as cooking eggs is easier. They do not require cold storage; they can just be boiled and given to children. Also, they have a lower chance of contamination compared with milk.

Jain's letter also mentions that, as eggs can easily be monitored, compared with '150ml of milk' or '20gm of almonds', even a child can tell if they are being delivered properly. However, the most advantageous thing, Jain told THE WEEK, is that almost 100 per cent of an egg is absorbed by the body and it is easy digestible, unlike other high-protein sources like soybean or groundnuts.

“There should not be any dilemma about giving eggs to the children who eat it, especially in a state like Madhya Pradesh that has been battling malnutrition for long,” said Jain. “Usually, the opposition to distribution of eggs is fired from the shoulders of the community. So we have decided to let the community have its say in the matter, through the signature campaign. Let it be clear that the community demands and wants eggs for its children.”

Values according to Nutritive Value of Indian Foods report of NIN, Hyderabad.