Fear in the air 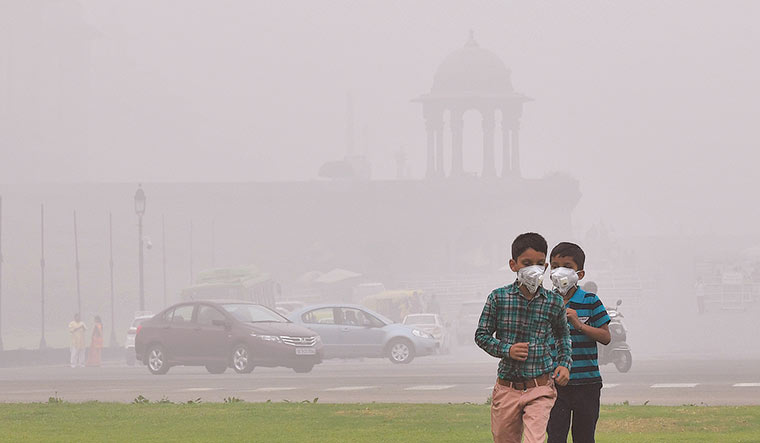 The first day of November was meant to be a happy one for Vikram and Meera Goswami. It was their daughter Vinisha's first birthday, and the family had planned elaborate celebrations. Instead, the Goswamis found themselves watching over their sick baby in a hospital, and using pink balloons to make whatever little they could of the special day. “We had planned on inviting a few relatives for the celebrations, too. But all that changed a couple of days before the birthday when she fell sick. Her grandparents were especially disappointed,” says Vikram, a resident of Rohini in Delhi.

The ordeal had begun when the couple stepped out for a walk on Diwali evening with their daughter, hoping to cheer up a cranky baby. Next day, the infant had high fever and cough and she kept sneezing. “Two days later, when the fever did not come down, we took her to Max Hospital at Shalimar Bagh where doctors told us that the baby had pneumonia, triggered by air pollution,” he says.

Pneumonia is defined as an inflammatory disease affecting the lungs, caused predominantly by bacteria, viruses and fungi. The disease is caused by accumulation of fluid in the alveolus, leading to obstruction of normal breathing. According to the UNICEF, the risk of developing pneumonia in children is doubled following exposure to air pollution, and accounts for more than 9,20,000 deaths globally.

Pollutants compromise the host’s immune response against invading pathogens in the respiratory tract, says a study in the journal Environmental Science and Pollution Research International. High levels of air pollution can lead to a compromise in the sterilisation and filtration mechanism of the respiratory tract, .thereby increasing the risk of developing acute lower respiratory infections, authors of the study say.

In Vinisha's case, this “compromise” led to a six-day hospital stay and nebulisation every few hours, even after she was discharged from the hospital. “We are now keeping her indoors, with the doors and windows shut. I also try to rotate the air purifier within the house, so that even when she's out of the room, she's somewhat protected,” says Vikram.

Even as the country, especially the NCR region, reels under the effect of air pollution and its adverse impact—both short- and long-term—on the health of its residents, its effect on children's health can hardly be overemphasised. According to the 2019 report of the Lancet countdown on health and climate change, that focuses on children’s health, exposure to ambient air pollution, most importantly fine particulate matter (PM 2.5), constitutes the “largest global environmental risk factor for premature mortality”, and results in several million premature deaths from cardiovascular and respiratory diseases every year. 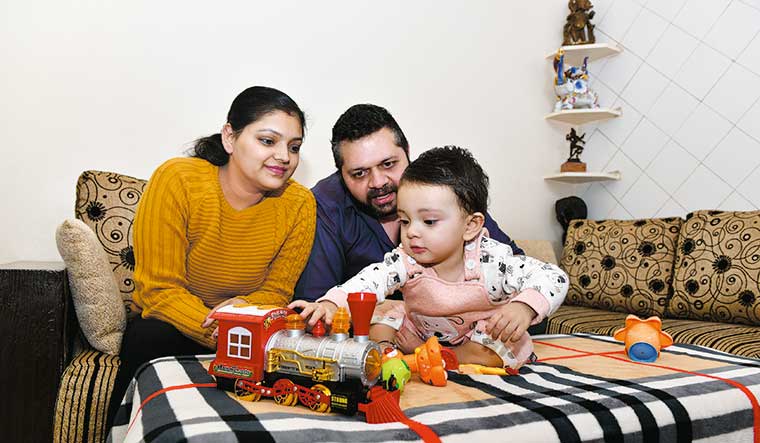 Healing at home: Meera and Vikram Goswami with their daughter Vinisha | Sanjay Ahlawat

World over, studies have pointed out that more than 90 per cent of children are exposed to PM 2.5 concentrations that are above WHO guidelines, which can affect their health throughout their life, with an increased risk of lung damage, impaired lung growth and pneumonia, and a subsequent risk of developing asthma and chronic obstructive pulmonary disease.

Experts say that air pollutants affect kids more. Children’s immune systems are weaker and they are more vulnerable to the adverse effects of climate change and air pollution, says Dr Poornima Prabhakaran, one of the authors of the Lancet report. “Children live closer to the ground where some pollutants reach peak concentrations,” says Prabhakaran, additional professor, head, environmental health and deputy director, Centre for Environmental Health, Public Health Foundation of India (PHFI). “Studies have documented effects such as preterm births and low birth weight for children when pregnant mothers are exposed to air pollution. It also affects their cognitive development, their height, and overall development,” she adds. Children also breathe more rapidly than adults and so absorb more pollutants, according to the WHO.

“Children's lungs are also smaller, their lung function is only 20 per cent of that of adults. Their exposure to outdoor pollution is also higher, especially in case of school kids, as compared to adults,” says Dr Sonia Mittal, senior paediatrician, Max Super Speciality Hospital, Shalimar Bagh.“Over the last three to four years, we have seen a rise in the number of cases of cough, asthma, pneumonia and allergies in children at this time of the year.”

An overwhelming majority of these children, says Mittal, do not even have a family history of respiratory diseases. Ask Garima Gulati Bhutani, 36, whose six-year-old daughter has to suffer persistent cough for days on end at this time of the year. “No one in our family has ever had this respiratory problem. Except for my daughter, whocannot stop coughing for three months in a year,” says Bhutani, an HR professional. “For at least a week, we were giving her medicine through the nebuliser every couple of hours, day or night. Even after that we had to slowly taper off the dose, so that she could breathe comfortably.”

Says Mittal: “We have to give steroids to reduce inflammation in the lungs caused by pollutants, and other medication to open up their lungs.” The range of discomfort caused to children by pollution ranges from mild to severe, she says; the mild may mean cough and sneezing, and severe may mean shortness of breath, pneumonia, bronchitis and asthma.

“Cases of respiratory issues with children such as persistent coughing, itchy eyes, nasal discharge and breathing trouble have only been rising. Diseases such as pneumonia and chest infections because of viruses are also taking longer to heal because of the effect of pollution,” says Dr Anil Sachdeva, director, paediatric emergency, Sir Ganga Ram Hospital, Delhi. “We have had to step up our dose of medication consistently to provide relief to the children. The situation is alarming, we are seeing children as young as six months being put on nebulisers.” About 3-4 per cent need hospitalisation, while the rest are being treated in OPDs.

Experts such as Sachdeva and Mittal also say that while masks and air purifiers can be used, the protective effect of these are still to be proven, and hence, children need to stay indoors until the air quality improves by several notches. “It is also difficult to find a mask that is a perfect fit for a child’s face, and children cannot have it on all the time,” says Bhutani. An environmentalist at heart, Bhutani says she feels using air purifiers and masks add to the problem—for instance, the waste created by filters in the purifiers, and even the appliance itself when it is replaced.

This year, however, she made an exception by getting a purifier at home for her daughter. “Even then, the air quality index never went below 60 [considered only moderate air quality, not satisfactory], and the average starting point was never less than 290,” she says. Besides, masks and air purifiers, or even odd-even schemes are at best short-term solutions, adds Singh. “We need to take effective measures so that next year, we do not have a situation such as this where OPDs are full of children and adults with respiratory issues,” he says.

Adequate policy measures are in place, but there are gaps in implementation, says Prabhakaran. “Outside of Delhi, especially in tier-II and tier-III cities, we do not even have enough monitoring stations that tell us what the air quality is like,” she says. “In Delhi, at least there are 25 monitoring stations, and so a lot of focus is on this city. But elsewhere, who knows what is even going on.” She adds that the PHFI is currently working on an air quality monitoring project with 50 hospitals to “increase awareness and sensitise people” in cities such as Kochi, Coimbatore, and Guntur.

Even as governments refrain from enforcing the implementation of crucial measures to curb air pollution caused by industries, construction work, rising number of vehicles and seasonal farm fires, for parents such as Bhutani and Vikram, the pain of watching their kids suffer is only getting prolonged each year. Watching the children gasp for breath, give up their playtime and remain cooped up in rooms with air purifiers, is not an easy task. “Sometimes, it occurs to us that we should leave the city that we have been living in for so many years,” says Bhutani. “Just a few years ago, who would have thought, that this would be the reason to leave everything.”