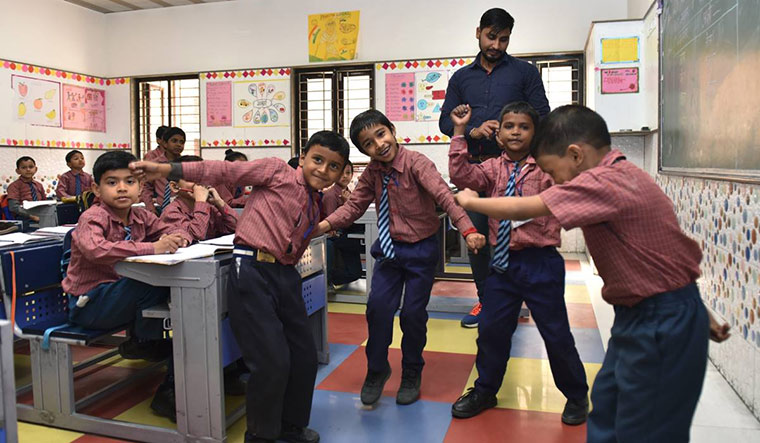 Little joys: The Delhi government launched a happiness curriculum across all its schools last July.

In January 2018, a course titled 'Psychology and the Good Life' at Yale broke all records in the university's 317-year history. Over 1,200 students—one-fourth of the undergraduates—had signed up for the course within a week of registrations opening. Barely a few days after commencement, it became Yale's most popular class ever. It was the promise of a good life that pulled the Yalies in and kept them hooked thereafter, says professor of cognitive science and psychology Laurie Santos, who started the course.

To her, PSYC 157, as it is known on campus, was akin to that one big ticket which would lead students to find and pin down something they had been eagerly pursuing all their lives—happiness. Sensing that "students seemed lost when it came to building emotionally rich and balanced lives," she took to teaching them how to be happy with the help of scientifically validated strategies.

Interestingly, the principles for long-lasting satisfaction that Santos lists, like social connectedness, expression of gratitude, living in the present, daily workout and sufficient sleep, find resonance in the happiness curriculum that the Delhi government launched across all its schools last July. Every morning for 45 minutes, over 1.2 million students in the age group of 5 to 14 take the class. It is an activity-based informal session of storytelling and gratitude expression, followed by five minutes of meditation. The class carries no grade and has no textbooks, tests or homework.

This has been life-altering for Ariana Thaver (name changed), 13, who was extremely reticent and uncomfortable in the presence of strangers, according to her teacher, Vandana Harit. "Her academics were below par, too, and upon further counselling we learnt that she had also been a victim of sexual assault," says Harit, who is also a teacher development coordinator at St Eknath GSKV School. Through storytelling, dance and drama, Thaver came into her own and showed improvement in her academic performance.

At the crux of such an initiative lies the belief that a major part of one's happiness is within one's control. "Fifty per cent of whether we are happy or not is determined by our genes, while 10 per cent depends on outside circumstances. The remaining 40 per cent of our happiness is controlled by us,” says Madhuri Mehta, CEO of Blue Orb Foundation and one of the 40 experts who worked on the happiness curriculum as a value-based learning project in Delhi schools.

Higher up, IIT Bombay and IIT Kharagpur are well on their way to building a culture of wellness on campus. The motive resonates with students who are realising the toll that academic rigour has taken on their sleep, mental health and sense of social connectedness. In August 2016, IIT Kharagpur introduced a course on the science of happiness and well being, through which students were to research and explore happiness, positive psychology and related concepts. Now, the programme is one of the most sought-after micro credits in the campus, says third year engineering student Abhijeet Wasudeo Bagade, who opted for the course in his last semester as a breadth subject. "These sessions are mainly activity based which stoke your intelligence and challenge your aptitude while teaching life skills such as time affluence over time famine, compassion and anger management. For instance, how do you solve a puzzle as a group without talking to one another? Or how do you enact a part of a poem by simply reading it once?"

A few times every month, Shivani Manchanda educates batches of 300 to 350 students of IIT Bombay on positive mental health. As a full-time student counsellor of the institute, she runs three- to four-hour workshops on life skills by way of fun extracurricular activities. "Many IIT students spend an unbelievably large amount of time chasing grades and points, and tend to miss out quite a bit on the softer parts in life such as compassion, motivation and dealing with guilt," says Manchanda. "So this is to tell them that our material aspirations and life circumstances do not determine or contribute to our absolute happiness quotient nearly as much as we think."

The question remains whether a happiness course actually helps transform the student's personality. Raghav Gupta, director (India and APAC), Coursera, says many studies show that one's physical health is linked to one's state of mind. "Happiness is associated with many positive benefits that can help you improve your health, career and your personal life," he says.

The first course on Coursera in this genre was 'A Life of Happiness and Fulfillment' by Indian School of Business in 2014. Since its launch, it has been one of the most popular courses globally. "We believe that happiness courses particularly appeal to working professionals, old and young, who come to Coursera to learn new skills for improving their careers," said Gupta. "With an aim to impact emotional intelligence, we expect our learners to not just gain a deeper understanding of the science of happiness, but to also be happier and understand mechanisms to reduce stress and anxiety."