Fitness enthusiasts in India are done with staid gym workouts 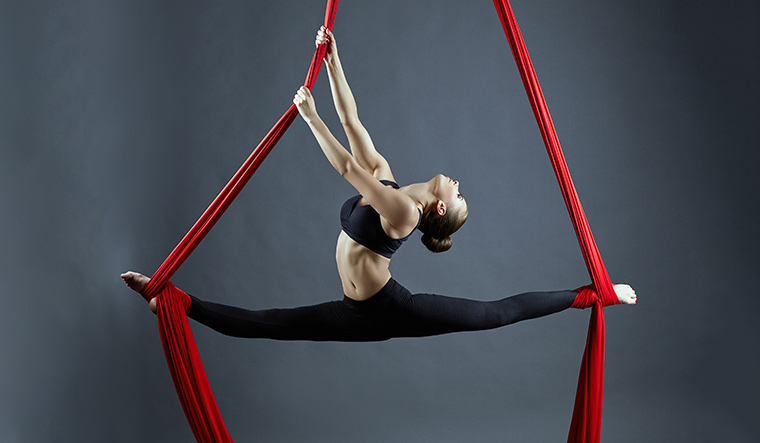 Silk route: Aerial Silk, which involves a series of aerial acrobatics while hanging from a silk fabric, is quite popular among adults and children.

On a bright weekday morning inside a leafy neighbourhood in suburban Lucknow, a man in a bright yellow tee, cobalt shorts and striking red sports shoes goes down on all fours and demonstrates animal movements to a bunch of young enthusiasts. Morning walkers stop by to watch Arun Mishra, 38, crawl like an alligator, with his torso suspended a foot above the ground balanced only by his palms and the tip of his feet, and rotate. Barely a few minutes into the 'alligator crawl', he squat-walks like a duck for another seven minutes and lunges with the intensity and force of a gorilla, before finally crashing to the ground and exclaiming, “Time to work out like a beast”. Every morning, the telecom professional and marathoner replicates the movements of at least seven animals, including that of a frog and a scorpion, as part of the Animal Flow Workout. “I attended the first introduction-cum-training programme on Animal Flow, in Delhi, in January. And, I was so struck by it that I had to imbibe it in my daily regimen,” he says.

Likewise, in January, a multinational IT company in Pune started the Pound fit class within its campus. Every Tuesday evening, young professionals are seen picking up a neon green drumming stick and gearing up for a full-body cardio jam session. Nidhi Singh, 31, an IT professional, cancelled her gym membership four months ago for its “monotony and lack of variety”, and has been a Pound fit loyalist ever since. “The energising and sweat-dripping fun of playing the drums is way more exciting than working on machines inside a gym,” she says. “Also, I could see the difference in myself after regularly attending the Pound fit class. I don't have to drag myself to work out and feel that I am in my best shape right now.” Pound fit is a full-body workout that combines cardio, conditioning and strength training using lightweight drumsticks as props, which add fun to the workout.

The need to break away from monotony and machine workout coupled with the craze to try out newer, different fitness forms has brought in an alternate fitness movement in the country, says Aanchal Gupta, founder-director of Arts in Motion, a performance art studio in Mumbai. And, it involves combination workouts, freestyle training and working out with one's core body and body weight as far as possible, she says. “2018 will see a growing number of fitness enthusiasts preferring to do high- and low-intensity workouts in equal measure, rather than sticking to any one type for long,” says Gupta. “This doesn't mean that the gym will lose its sheen. In fact, it will essentially play the role of a supplement rather than being the main workout form that it has been for so long.”

Gupta's point of view resonates with Mayuri Singh, 30, from Mumbai, who alternates between swimming, cycling and running every two days of the week, and calls it the “everyday triathlon”. On Sundays, she hits the gym for 30 minutes, “only for strength training”. “I was a lazy cheeseball earlier. But after marriage, my gym rat husband, Shobhit, would drag me to the gym everyday,” she says. “Though the treadmill did add spring to my body, it couldn't keep me interested for long. After five months, I opted out and took the triathlon route so as to have a balance of high- and low-impact exercise and more important, to enjoy my exercise.” After almost a year, Singh bagged the Half Ironman title in Bahrain last year. 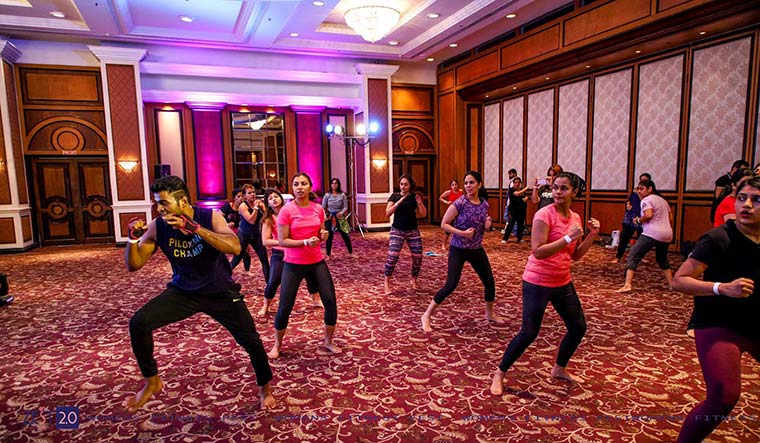 A combination of Pilates and boxing, and Pound fit, where drumsticks are used as props, in India.

Recently, actor Sonali Kulkarni, whose latest film Hope Aur Hum released in May, trended on social media after she cycled to an event in suburban Mumbai. Not many know that the actor is a triathlon participant—her first triathlon was in Lavasa near Pune last year. “That day when I was invited for the event, I had to cycle as per my fitness schedule. And given that I hate skipping workouts, I decided to simply cycle to the event,” says a beaming Kulkarni, who lives in Mumbai with her eight-year-old daughter.

Pune's Kaustubh Radkar, 35, a seasoned Ironman athlete and the first Indian to qualify and complete the Ironman World Championship in Hawaii last year, takes credit for coaching Kulkarni and for bringing triathlon into everyday fitness routines of young professionals. “Times have changed,” he says, “and people are much more receptive to the concept of a triathlon now. In 2014, when I officially began coaching in India, I had two or three students. But, this February, when the Half Ironman was held in Colombo, I had 25 trainees from India. Until now, running was the big thing and marathon ruled. But now, as awareness builds, people want to do all three—swim, cycle and run—as a lifestyle choice.” This is also because triathlon involves a high level of cross training that enables the use of all body muscles, he says. And, the risk of injury is minimal as the high impact of running is negated by swimming and cycling. 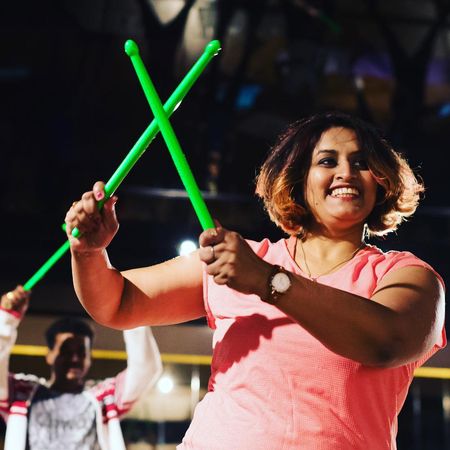 But Gupta says the need to embrace newer fitness forms is not just physical, rather a combination of physical, emotional and spiritual. She cites the example of Aerial Silk, which involves a series of aerial acrobatics while hanging from a silk fabric. At one of her sessions, a group of about 20 participants, in their mid to late 30s, raise their arms and grip the two ends of a long, wide red ribbon hanging from a 13- to 15-foot high beam. With practised grace, they extend their legs and wound the silk-like ribbons around them, and swiftly hoist themselves into the air with a sinuous, full-body motion. “Aerial Silk is one of our most popular classes, both for adults as well as for kids above the age of four,” says Gupta. “In the past three months, we have started two more batches, taking the total count to six batches of 15 participants each. The popularity for Aerial Silk also stems from the fact that as one lies suspended many feet up in the air, a meditative connect binds the doer with her own body, which is very therapeutic.”

But no new workout starts trending by itself. There is a force that works behind the scenes and markets it vigorously, says Amrita Yadav, 34, an international fitness marketing agent in Delhi. A fitness instructor, Yadav's job profile involves travelling the world to connect with master trainers, attend conventions and expos, and spot fitness trends and introduce them in India by way of training, marketing and brand engagements. “About two years ago, I introduced Piloxing in India and late last year, I got Pound fit. Both these have taken off beautifully and people are enjoying it,” she says. 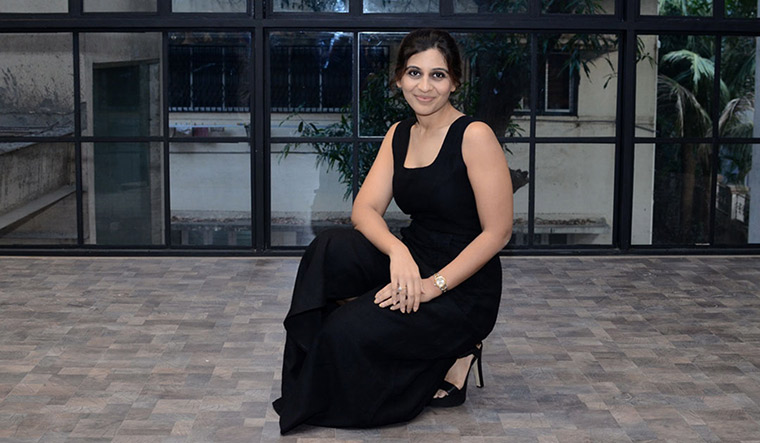 Yadav organises one- to two-day training camps that include both theory and practical lessons, where master trainers from the United States come down to impart technical training to fitness instructors in India. For instance, Michelle Opperman, master trainer of Pound fit, is in India, for the third time, training instructors in Bengaluru. She ensures that each instructor receives the original music and choreography of the fitness model, so that they can maintain the essence and uniformity of the workout when instructing their students. Kapil Kanodia, a fitness instructor from Lucknow, trained for Piloxing under master trainer Mahek Shah—one of only two master trainers for Piloxing in India; the other being Antara Guha Choudhary. Kanodia refers to Piloxing, which is a combination of Pilates and boxing, as “Pilates with a punch”. He began his first class in the second week of January this year with 20 students and bets that “an hour of Piloxing can burn up to 600 calories, which is 200 calories more than a comparatively lighter version of only Pilates.” There are about 200 instructors for Piloxing in India.

Arun Kumar, owner of International Sports and Fitness Academy in Koramangala, Bengaluru, introduced the Animal Flow workout to the Indian audience when he partnered with the Florida-based company, Animal Flow, late last year. “Master trainer Richard Scrivener from the UK came over a couple of times to train instructors here,” says Kumar, 33. “Workshops are open to any fitness enthusiast who wants to improve movement, strength and core skills.” Kumar is also aggressively promoting Animal Flow level 1 and 2 workshops across Bengaluru, Mumbai, Kolkata and Chandigarh on his Facebook page, Animal Flow India. A level 1 session costs Rs 21,000. 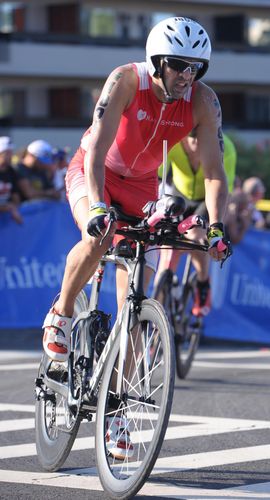 Riding high: Kaustubh Radkar, a seasoned Ironman athlete from Pune, says more people are receptive to the concept of a triathlon now.

Another popular fitness form that is catching up fast, especially in metro cities, is Pole Fitness—a workout that is more sporty than sensuous. “We are breaking the notion of sexiness associated with pole,” says Mumbai-based Smilie Suri, who trained in Pole Fitness from Milla Tenorio's Cafe De La Danse in Dubai. A first-of-its-kind Pole Fitness camp, held in the first week of May in Mumbai, witnessed a huge number of participants. Though the pole has been a part of the Indian fitness scene in the form of Mallakhamb, a traditional Indian sport where a gymnast performs aerial yoga postures and wrestling grips on a stationary wooden pole, the latest variant uses poles made of chrome and brass, which spin and are stationary, too. “It is an all-in-one workout in the sense that one uses one's entire body weight and that helps in strength training. Additionally, the pole helps one work on one's flexibility and movement,” says Suri.

Uday Deshpande, 63, who is known for nurturing and promoting Mallakhamb in India and for running the famous Shree Samartha Vyayam Mandir in Mumbai's Shivaji Park, says, “Mallakhamb, the traditional pole gymnastics, is an ancient martial art form that originated in Maharashtra and is once again gaining popularity among the youth, and an increasing number of people are taking to it. It is spiritual, mental and physical.”

India still lags way behind in accepting and exploiting global fitness trends, says Yadav. “India is running three years behind right now in comparison to the rest of the world. Earlier though, this gap was huge,” she says. Zumba, which was first introduced in the west in 2000, came to India only in 2010. “But now as we are getting more aware and serious about fitness, we are catching up,” says Yadav. “Piloxing was introduced in the US seven years ago by Swedish-born Viveca Jensen, who used her multi-disciplinary skills as a dancer, body builder, Pilates instructor and trained boxer to deliver a workout with a difference. In two years it became a huge success in the US, and came to India only about a year and a half ago”

Nisha Varma, certified health and fitness specialist from the American College of Sports Medicine and a Reebok University master trainer, recalls that fitness became a trend in the 1970s, before which there were just akharas and bodybuilding gyms. “Later, people started considering Bollywood dance and aerobics. And, for the next 20-30 years, group classes were very popular, and very few women opted for bodybuilding kind of fitness. It was still the domain of men,” says Varma. “Then came Zumba and a plethora of fitness forms. Now, with growing awareness about one's own health and body anatomy, everyone is opting for a certain fitness programme.” 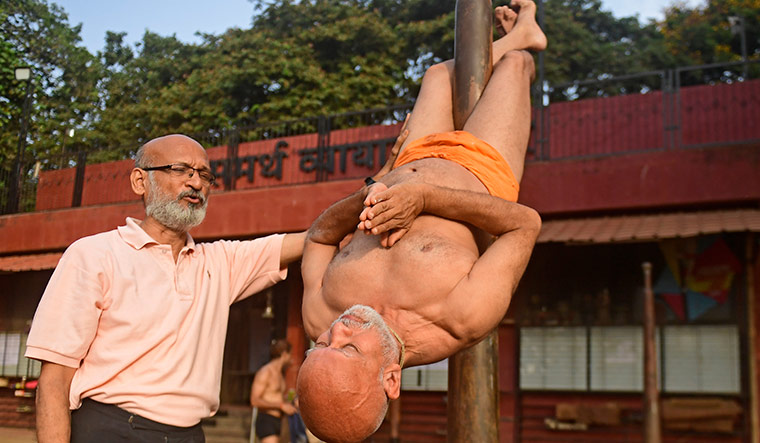 Fifty per cent of fitness enthusiasts are today going to an organised place such as a gym or a fitness studio, says Varma. But 2018 is all about multiple workouts spread across the week, she says. “It is essentially about using and playing with one's core body weight and muscle mass density,” she explains. “It is also about being free from props, being free from constricted environments and enjoying one's workout.” 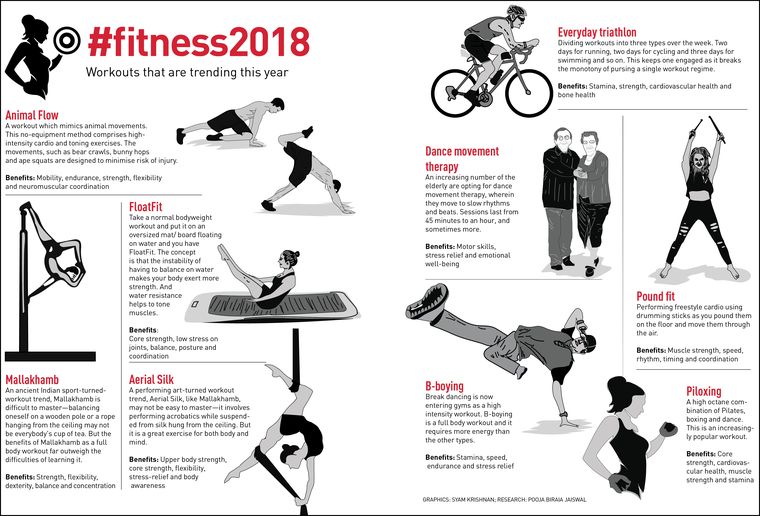