Varanasi through the lens of festivities 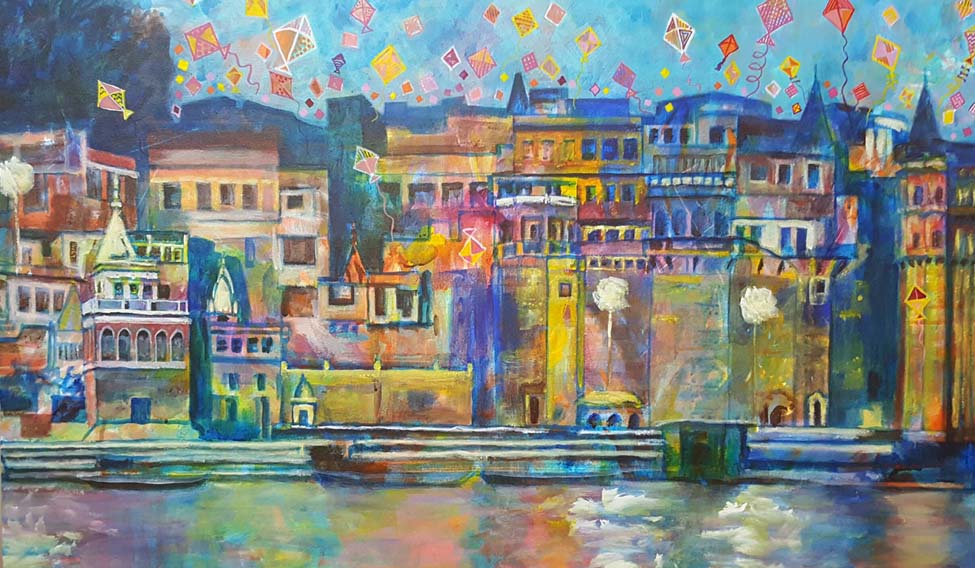 Varanasi has been the muse for several artists over the centuries, but Mamta Malhotra's take on this holy city is through the kaleidoscope of makar sankranti. In her debut solo show, titled Kashi ke Rang: Of Faith and Festivities, the Varanasi-based artist is bringing together 51 paintings and 13 sculptural pieces that have been created over a period of three years.

Speaking about her current showcase, Malhotra says, “I have used the medium of oil and acrylic on canvas. Varanasi is famous for its wooden bowls. The sculptural pieces in this exhibition are made by the local craftsmen to highlight the dying art. I have reworked by painting them in the light of makar sankranti. Six wooden bowls and antique trunks made by them have been re-painted by me.”

Malhotra is fimiliar to Varanasi. In fact, she has spent 35 years in this holy city and is aware of its way of life. It is the city and its culture, she says, inspired her to paint the city and plan an exhibition. “My take is different. The exhibition talks more about the environmental way of life in Varanasi, the importance of culture and the relationship we share with the nature,” she says.

The canvas highlights her take on the holy city from an architect's vision. She has clubbed it with Makar Sakranti, making it unique. She chose this theme for her sheer interest in the green living.

“Though through the paintings, you will see the beauty of the ghats, buildings, River Ganga and the spiritual meaning it holds and the physical beauty of the river along with the problems it faces, my motto is to give a glimpse of the life people live through this festival. Makar Sakranti is a major festival in Varanasi and the city becomes festive. There's a culture of flying kites in the city. I have conveyed these feelings by using fresh colour and bold strokes, in various layers reminiscent of the kite filled sky, the water of the Ganges and sunshine,” she says.

Before learning to paint and sculpt, Malhotra studied architecture from Chandigarh College of Architecture. Though she chose to paint, she used her architect's knowledge to view the city, giving a beautiful balance of aesthetics and architectural lines to her works.

Apart from this, the artist has received an honours certificate from the Royal Drawing Society in London. Her works have been featured in a New York Times bestseller coffee table book, the HarperCollins catalogue and Architecture Week magazine. This is not the first time that Malhotra is exhibiting her works. She has been a part of several group shows at the Visual Arts Gallery at the Habitat Centre, Triveni Kala Sangam annual exhibition, Art Laureate gallery, the Trump Tower and other venues. However, this happens to be her first solo show.