BOOKS: How Sikh legacy is slowly fading in Pakistan

The last empire in India was that of Ranjit Singh (1780-1839), says author Amardeep Singh. It is no exaggerated statement. By the 1700s, post the death of Aurangzeb, the Mughal empire had weakened. Maharaja Ranjit Singh (popularly known as Sher-i-Punjab) emerged an unchallenged leader among the Sikhs, uniting the warring confederacies and building an empire that—in his sunset years—would extend from Punjab to Afghanistan.

When it came to military strength, the Sarkar Khalsaji was second to none. By 1799, Maharaja Ranjit Singh had brough Lahore under his control. By 1813, Sikh forces wrested the highly strategic Attock from the Afghan forces. The defeat of Yusufzai tribesmen (1823), in what is now Pakistan, further weakened the Afghan forces. By 1819, he had annexed the Kashmir valley.

Sikh culture flourished during his reign. Going by numerous historic accounts, he was much more secular than his contemporaries, with people from all castes and religions serving in his army. Forced conversions were not the norm, as he patronised places of worship of different communities. The Harmandir Sahib (Golden Temple) was rebuilt and restored to its present-day glory. He also built Takht Sri Patna Sahib gurudwara in Patna (where Guru Gobind Singh was born) and Takht Sri Hazur Sahib in Maharashtra (where Guru Gobind was assassinated).

Seven decades after Partition, the erosion of the rich Sikh legacy in Pakistan is the topic that the author wants to highlight. “Eighty per cent of that mighty empire is now in Pakistan. Memories of that legacy are being wiped out.'' Amardeep Singh, a Kashmiri Sikh who spent his early years in Gorakhpur and later joined the corporate world, grew up to his father's misty-eyed memories of their home town, Muzaffarabad, now in Pakistan-occupied Kashmir (PoK). He developed a taste for history, especially the Sikh legacy, early in life. On Wednesday, his lifelong interest culminated in the publication of his second book that captured the fast-disappearing heritage. The book, The Quest Continues: Lost Heritage—The Sikh legacy in Pakistan, was released in New Delhi. It is a sequel to The Lost Heritage—the Sikh legacy in Pakistan, which was published last February.

Copy of the books authored by Amardeep Singh | Arvind Jain

Singh is one of the extremely fortunate Indians who got to travel the length and breadth of Pakistan. He visited 36 cities and villages in his first trip, and in his second—invited by the Pakistan government itself—he explored 90 cities and villages. A passionate photographer, Singh's lens captured the centuries-old heritage: old gurudwaras and forts like Attock and Jamrud (the latter built during the Sikh era), as well as the living legacy of the various practitioners of his faith in Pakistan. “The Pakistan government maintains 24 heritage gurudwaras, but there are so many more that are part of the rich legacy. Some are crumbling, many have been occupied by poor families, and some serve as godowns. Only 30 per cent of the heritage is left now,” he says. 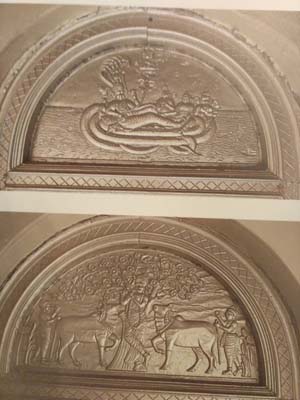 His pictures, however, prove that many of these medieval structures are still treasure troves—frescos (mural paintings) which lay testament to a shared past of Hindu rituals, Jain traditions and Sikh influence. In remote corners of the country, the monuments are surprisingly free of graffiti and mutilation by fanatics; however, they remain untended and are literally fading away. One gurudwara is home to a family which moved from east Pakistan.

Singh, during his travels, came across the tombs of Sikh general Hari Singh Nalwa, and Heer—the heroine of the famous Heer Ranjha love fable in Punjab. “Unfortunately, the tomb of Heer, like many other monuments across Punjab, has been renovated to a modern jarring tiled exterior, bereft of its historic ambience,'' he writes.

Singh says it was divine power that facilitated his tours. It is not easy for Indian citizens to get visas into Pakistan. Usually, these visas are city specific. But he literally had the run of the country, from Swat in the Khyber Pakhtunkhwa province, to Balochistan and Sindh.

Singh insists his efforts are not about a religion, but the heritage and legacy of a people. He was amazed at how alive Sikhism was in in Pakistan. “On paper, there are 12,000 practitioners, but the teachings of the faith are imgrained in people all over. The Nanakpanthis, for instance, do not look like Sikhs at all, but they follow the same teachings.''

The author feels that while time and negligence passively erased the memory and heritage, acts of anger had a lasting and far-reaching impact. "The Babri Masjid demolition had a cascading effect in Pakistan, of which we know almost nothing. Do you know how many temples, Hindu and Jain, ancient ones, were destroyed in retaliation?'' he poses.