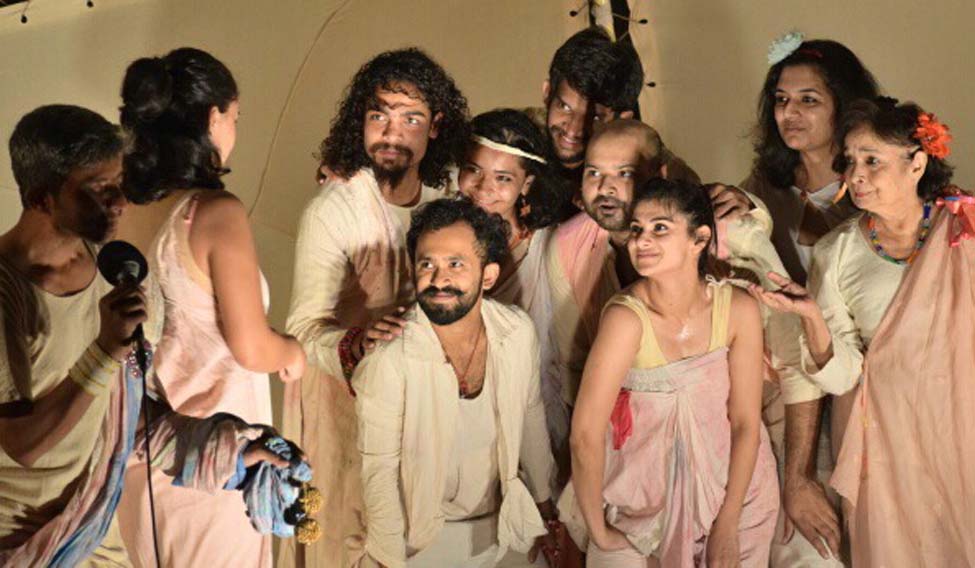 A scene from the play

It isn’t a brand new idea, but a growing trend—this need to break the fourth wall between the actors and the audience, with a text that questions stereotypes. Shena Gamat and Niranjani Iyer did just that with their unique production sporting an unusual name. Three Hearings on the Existence of Snakes in the Human Bloodstream, is based on an award-winning science fiction story by Canadian writer James Alan Gardner.

The current social-political scenario was Shena’s inspiration for this play. She insists that she is not political, but the divisiveness in society and the resultant violence made her want to do something about it. “More than politics, it’s what happens in my neighbours’ house that moves me”, she says. People have experienced an assault on their lifestyles and beliefs just because they are 'different'.

A strong need to examine this 'otherness' in a compassionate manner brought Shena and her dramaturge Niranjani Iyer together. Shena, ever eager to learn new things and improvisational in her approach, wondered what 'dramaturge' meant when Niranjani offered to fill in that post! Laughing at the memory, Niranjani recalls that when she explained it to her, Shena embraced the idea with delight. And so a script was born.

The Facebook call for actors for the production got an overwhelming response—that too from the crème de la crème of English theatre, known for their selectiveness as far as roles and directors went. Shena, who was known more as a performer, had come into her own as a director with the success of her last play, I Love You Let’s Have Sex, which she devised and performed with her partner and husband, Ashish Paliwal.

They introduced the idea of intimacy with the audience, as well as questioning stereotypical beliefs, in that play. They used the format again in Three Hearings.... It was perhaps that success coupled with the fact that this was to be a multilingual musical and an ensemble production (no heroes or heroines!), that piqued the actors’ curiosity and interest, says Shena. So she and Niranjani never faced any billing problems or tantrums, despite the fact that they had some very senior and popular artistes in their cast.

The process included two months of discussion and improvisations, pertaining to the central idea of difference and how obsession with it could lead to violence. Actors told their own stories, which were woven into the text as personal dialogues. The workshops became part of the process of 'communal meaning making', as Niranjani called it. The third month saw the introduction of the script, where the actors took on parts.

The play, which was funded by the India Foundation for the Arts, an independent art funder, opened at a new and intimate space, the 100-seater Oddbird Theatre in Chhattarpur, in Delhi’s suburbs, where one could sip wine at the small bar, while waiting for the performance to begin.

The opening day audience was appreciative of the unique format, especially the way the actors connected with them and the creative use of music and humour, to pepper the more serious and political parts of the play. The main story saw three hearings through history when scientists were pitted against religious fanatics and were punished for airing their 'heretical' views of the universe. The dialogues, which were in English and the mother tongues of the actors, poignantly brought into focus the fact that intolerance had a habit of reasserting itself every century.

Every now and then, the action on stage would halt for some theatrical outreach, when actors panned out in the audience and distributed slips of papers for them to write down their questions, if they had any. The director, seated in the audience, would then read them out before the next act began. Brecht would have been proud of the extent of alienation the actors achieved, weaving in and out of their roles, playing characters, narrators and themselves in the production. Many of the thoughts and moments were expressed through lyrics written by Shena’s talented, teenaged daughter Aditi, a professional pianist, and composed by Anant Dayal, a fashion designer turned musician.

The plan is to tour the play to unconventional and open spaces. The play has also been performed at community centres for better community outreach.