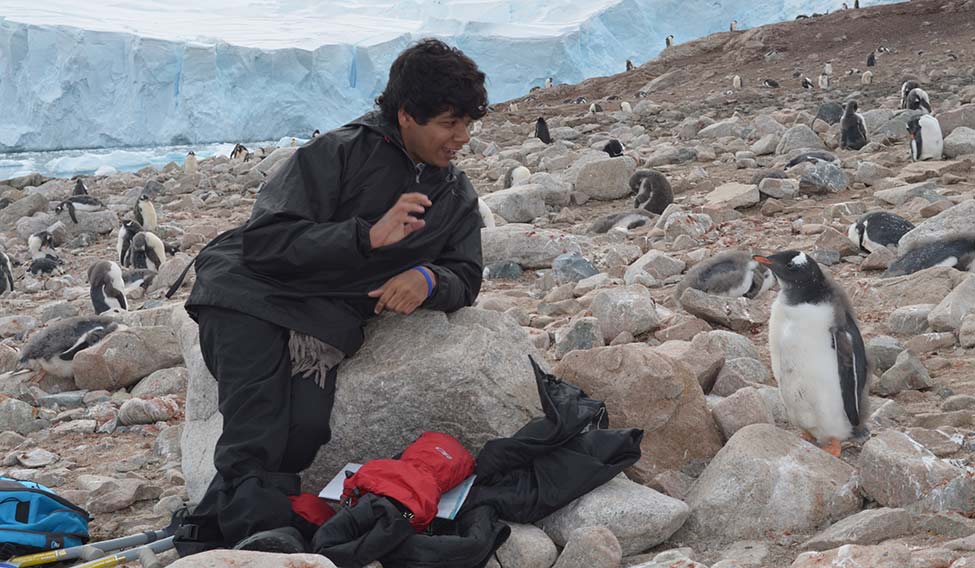 Making a point: Vishwanathan during his trip to Antarctica.

With proper support, a person with disabilities can achieve a lot, believes Sai Prasad Vishwanathan

Adversity brings out the best in man and Sai Prasad Vishwanathan of Tiruchirappalli in Tamil Nadu best exemplifies it. The gritty 31-year-old, who walks with the support of crutches, has proved it time and again. In 2008, he became the first Indian with a disability to skydive from a height of 14,000ft. After conquering the sky, he went on to complete two more physically and mentally gruelling challenges, one of which included a trip to Antarctica.

“In India, disability is associated with karma. People believe that a person suffers from disability because he or she has bad karma from their previous life,” says Sai. “I wanted to change this view. It isn’t bad karma but complete lack of infrastructure which is causing disability.”

He was born with meningomyelocele. It is a type of spina bifida or a birth defect in which the spinal canal and the backbone don’t close before the baby is born. Sai had an additional growth on his spinal cord. It was surgically removed when he was 13 days old. Following that, Sai lost sensation in the lower half of his body and control over his bladder.

The doctors warned that over time, Sai would lose his ability to walk. He was forced to change school seven times because of his disability. “During a school activity, a nail pierced through my foot and since I had no sensation in my legs, I continued walking with the help of my crutches,” recalls Sai. The wound continued to bleed for weeks; and the parents of his classmates feared that it was a contagious disease. As they complained to the school authorities, his parents were forced to move him to a different school.

His family, especially his father who was a railway employee, kept him motivated and encouraged him to study hard for a better life. In 2002, Sai joined Chaitanya Bharathi Institute of Technology in Hyderabad to study electronics engineering. Though keeping up with the pressures of college life was difficult, Sai graduated with a gold medal in 2006 and joined Infosys in Mysore.

“During the internet boom in 2006, I learnt more about how I could change my life despite my disability,” says Sai. “I decided to quit my job and go abroad for further studies. I faced a lot of opposition from everyone.” But he had made up his mind. He moved to the US after getting a full scholarship to do his master’s in computer science at the University of Wisconsin-Madison.

While living in the US, Sai was amazed to see the infrastructure support available for people with disabilities and how accessible public spaces were to them. “The Bhagavad Gita says we are made up of five elements—earth, water, fire, air and ether (space or void)—and only an individual with complete abilities can experience these five elements,” says Sai. “I decided to challenge this notion and prove that even a person with disability can experience them.”

In 2008, he went skydiving against the advice of his doctors. He underwent training, successfully completed the dive and entered the Limca Book of Records. The scariest part, Sai says, was when his parachute was unfolding and he could feel his entire weight and when he had to land on his back as his legs were tied up. “I had decided to do the dive because, though it took more than nine minutes, I could gloat about it for the rest of my life,” he jokes.

After completing his postgraduation, Sai returned to India in 2010 and joined the MBA programme on merit at Indian School of Business in Hyderabad. He set up ramps across the campus to make it more disabled-friendly. He also co-founded Sahasra, a counselling programme that helps engineering students to prepare for GMAT exam. “Though Andhra Pradesh has 250 engineering colleges, many students did not know how to prepare for GMAT,” says Sai. “I started counselling them for an initial fee of Rs 100.”

The programme turned out to be popular. Through Sahasra, Sai reached out to more than 30,000 students in 40 colleges and it raised Rs 65 lakh in four years. The money went as scholarships for engineering students to pursue higher studies abroad. “I told the students that only if they scored more than 700 marks in the GMAT exam should they pay me,” says Sai, “and 130 of them did.”

In 2012, Sai went to the Grand Canyon National Park in Arizona for his encounter with the second element—earth. “I got all the permissions required to camp in the middle of the Grand Canyon and was dropped at the location in a helicopter. I had undergone training in Wisconsin on how to survive in the wilderness,” says Sai. He camped in the Canyon for a week all by himself.

The very next year, Sai was selected to be part of the Antarctic Youth Ambassador Programme organised by Robert Swan, the first man to walk on both Poles. He spent two months raising money (Rs 20 lakh) for the trip. Sai, along with 30 other members, first travelled to Brazil. From there, the group went to Argentina (one of the seven countries that maintain territorial claim on eight territories in Antarctica). Before leaving for Antarctica, the group led by Swan went trekking on Mount Aconcagua to acclimatise themselves to
the harsh weather. Sai found it difficult to use his crutches on the icy terrain, so he replaced the aluminium balls at the base of his crutches with cut out tennis balls, which provided better control.

He survived in the harsh climate of Antarctica for 15 days and conquered the next element, water, by taking a dip in the freezing waters at Deception Island. Called a polar plunge, it is like a ritual for people visiting the continent for the first time “After I went into the near-freezing water, I was left with chills for several days,” says Sai. “Being able to survive in Antarctica and spreading awareness about disability through the programme gave me the confidence that I can survive anywhere in the world as long as the system supports me.”

After experiencing three of the five elements with the most exhilarating experiences, Sai now plans to go trekking on a volcanic mountain to experience ‘fire’ and stay in a cave in Argentina to experience ‘space’.

Over the past six years, Sai has won several awards, including the Hellen Keller Role Model Person of the Year award in 2010 for his report on a job generation model for people with disabilities. After working with Deloitte US for five years, Sai quit his job a few months ago and is on a sabbatical until June.