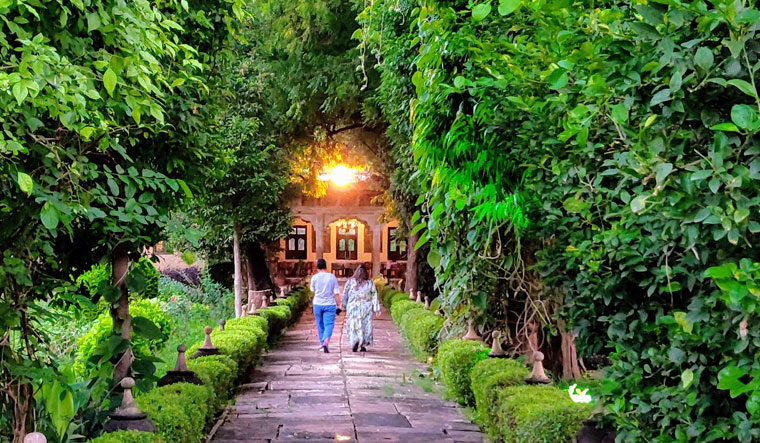 Do you wonder how the royal Mughals lived? Don’t just read about it, go experience it in the land of palaces, forts and temples—Gwalior. Away from the hustle of the city, live like a royal for a few days in Deo Bagh—this non-hotel is a heady wonderland. With exotic family temples and pavilions, gorgeous woodwork, lush gardens with dancing peacocks, this is a place you would want to explore every inch of. And it is more than just a visual experience. The atmosphere here is saturated with the fragrance of jasmine, grapefruit and guavas.

Deo Bagh has played host to important Mughals who camped in this ‘char bagh’ with a 36-pillar pavilion at its core. The pavilion safeguarded women in its concealed chambers through summer thanks to the trench of water on all its four sides. Later, as the victorious Maratha military trooped towards Delhi, the Jadhavs took control of this natural water catchment area.

In April 2012, Deo Bagh opened its doors with fifteen rooms spread athwart five wings, fronting a Nau Bagh—a garden plaid into nine parts. Each of its villas are named after the members of the aristocratic Jadhav family. The astounding attention to detail and rich proud history echoes around this palace. It exemplifies its heritage and does not fail with its status for superlative levels of service.

The restored Deo Bagh feels more like a palatial oasis as conflicting to a hotel and is every bit the grand architectural masterpiece the original. But with a tinge of modern luxuries. I call it momentous hedonism. The rooms and suites differ in size, indulgence and price, but believe me when I say even the average room offering is nothing short of incredible.

Facing the gardens is the best chance to relish the setting sun, as well as a serene way to wake each morning. With intricate details, well-appointed textures and marble bathrooms, no detail has been overlooked. Illustrious by its once used as Mughal camping later Hindu architecture portraying glorious royal India, Deobagh is full of infinite intricacies, leaving me to feel as if my entire time here is one of discovery. Every element, be it major or minor, seems to have been painstaking—from the equilibrium of the hotel’s highly photographed Baradari to the zillions of small brick tiles that could never possibly be counted throughout Deo Bagh. I check in for a total of three nights, spending much of my time within in its grounds as it feels like a tranquil oasis.

Breakfast by the Baradari is quite the affair and a great opportunity to enjoy stunning views, no pancakes or golden syrup but instead a superb local offering to savour at the water’s edge. The menu showcases multi cuisine gastronomy while also including robust punch of spicy Madhya Pradesh fare. The crowning glory is the ‘Bhopali Mutton’ the flesh is cooked sous-vide style, and fairly melts in waves on the tongue and the lachha parantha accompanying just adds to the whole experience. From walking around the property gardens to lounging at the Baradari, I really can choose to take it in at my own pace. The backdrops are exceeded only by the amazing service of the brilliant staff. The hotel also arranges private tours of the Gwalior Fort and surrounds, of which I would highly recommend if this is your first time visiting the city. Life can’t get any better than this, more so amidst a global pandemic.