Up close with actor Bhumi Pednekar 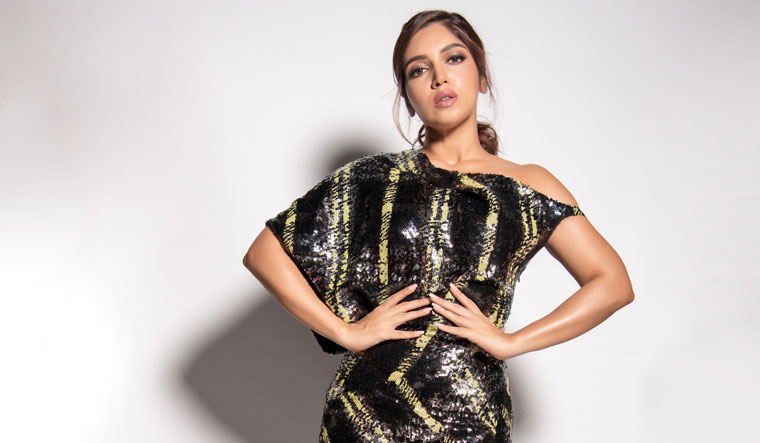 Exceptionally lucky!” is what Bhumi Pednekar has to say about her acting debut. Her Bollywood journey is what one would call a real-life potboiler—starry dreams, an inner calling, plush job, oodles of oomph and a smashing stroke of serendipity. She was only 17 when she started working at Yash Raj Films (YRF) as an assistant casting director. But little did she expect to grace the silver screen at the time. While most artistes start with small roles, she made her grand acting entrance as female lead opposite Ayushmann Khuranna in Sharat Katariya’s romantic comedy Dum Laga Ke Haisha. “I used to conduct auditions myself at YRF for four years and the people there as well as directors were impressed with my abilities. So, when the script for Dum Laga Ke… came, they got me to audition along with 300 girls. I was 20 then and had never told anyone that I wanted to be an actor. It just happened,” she says. At a time when girls do anything to lose weight, Bhumi gained over 20kg to be able to play the character of an overweight Sandhya, who is intelligent with a very sorted outlook towards life. Her character has since, undoubtedly, become one of the most memorable leading lady debuts in the recent past. “It was destiny in the first place that I landed a job with YRF. After four years of working there it was nothing but sheer luck that Dum Laga Ke… came my way. I thank God for putting me in the casting department at YRF right from the start because of which I had read so many scripts, knew how to shape a character and much else.”

Bhumi’s first film got her accolades, including an award for the best female debut that year. That, followed by Toilet Ek Prem Katha and Shubh Mangal Saavdhan—all within a span of two years—launched her as one of the most agile, talented and skilled ‘Yash Raj Finds’, who is loved by the masses and the classes. “Again, it was luck that I got Toilet Ek Prem... immediately after my first film. I am in this business of entertainment for the love of stardom of course, but to do it in a way that I can also give back to society. The idea is to do films which will bring about a change of mindset in society or at least get people to start talking about the issues for which I stand up for in my films,” says Bhumi over the phone, as she awaits to depart for Mumbai from Goa after visiting her hometown Pedne. Surely, Bhumi’s story is a ray of hope to hundreds of girls working at YRF who would kill for a break like hers. 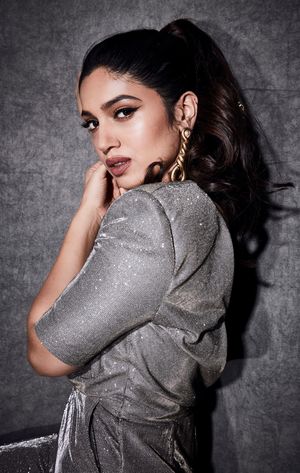 Although she has been on the tinsel town map for just five years now, she has delivered ten releases, including an anthology (Lust Stories), of which more than six have been runaway hits, and the rest have earned her unprecedented critical acclaim. Her career graph is marked with punchy performances by characters that are headstrong women who are always on the right path and stand up for a cause. The best part of her films is that the message lingers in one’s mind long after the film is over. In Toilet…, she stood up for personal hygiene, in Shubh Mangal… she demanded respect, while in Bala, she was the inimitable Latika Trivedi who talks about inclusivity and comes across as a breath of fresh air in a dark-skinned avatar. But Bhumi’s latest character Kitty, in the Netflix Original Dolly Kitty Aur Woh Chamakte Sitare, reflects the idea of not-being-right or being perfectly imperfect. “In this off-centre narrative, my character is the closest I play to being my real self,” says the 31-year-old. “It is also the most real, raw and gutsy role that I have ever done. I don’t think I have ever done this kind of role before.” But the actor has been known to explore and experiment with roles in a very short period, which has fans looking for something new every time. As a matter of fact, she has called herself “creatively very restless” in a couple of interviews.

Dolly Kitty… is a film that revolves around the unfulfilled lives of two sisters, Dolly (Konkona Sen Sharma) and Kitty (Bhumi Pednekar), who hail from the small town of Darbhanga in Bihar and earn a living in the city. Kitty is mired in a barrage of emotions and her life has all the shades of grey there could possibly be. She works in a shoe factory as an assembly-line worker, where her boss insults her. At home, her brother-in-law makes inappropriate advances and her new job on a dating app involves alleviating the loneliness of random strangers over phone. “What I liked best about the character is the many layers she brings to the definition of a good girl, which anyway is so warped, biased and incorrect. In a way, I am breaking those preconceived notions,” she says. And somewhere down the line, in this process of experimenting with the greyscales of life, she finds her true self.

Her instinct for choosing scripts with meaty and meaningful roles has hit the nail on the head most of the times, although at some points, it did turn out to be a miss. “I understand that every film does not connect with everyone. But that is the challenge that comes with being an actor,” she says. “I wanted to be an actor so bad that I did not say no to my very first role as an overweight girl who looked 20-30kg fatter than my real self. To get to be a part of a film and to be able to lead that film is all that matters. I always want to create my own track even if that meant I was the only one racing on it.” After Kitty, it is the character of Vedika Tripathi in Pati, Patni Aur Woh, which Bhumi feels is the best portrayal of her real self. “She is a strong-headed character. It may be a masala film, but Vedika is definitely the closest to me as she is the most urban of them all and is a survivor at heart,” she says.

According to Jaideep Pandey, a veteran journalist covering Bollywood, Bhumi proved that she even fits into super-commercial cinema with Pati Patni Aur Woh. “It was, in fact, her first big-break in the industry which allowed her to break many stereotypes,” says Pandey. He also feels that having worked as a casting director for over four years with YRF, Bhumi certainly has a great sense of analysing and visualising a character. “Although her films like Sonchiriya and Saand Ki Aankh did not do well in theatres, her acting got a couple of nominations for awards.” Sonchiriya was Bhumi’s first release of 2019, in which she played the role of a young housewife in rural Chambal alongside Sushant Singh Rajput and Manoj Bajpayee. The film, which was about an imploding gang of dacoits, received positive reviews, but was also called “unwieldy”, “messy” and “overly ambitious”. Her next launch that year, as the septuagenarian sharpshooter Chandro Tomar in the biographical film Saand Ki Aankh, got rave reviews from critics but gained nothing more than 030 crore at the box office. Bhumi and her co-star Taapsee Pannu were jointly awarded the Screen Award and Filmfare Critics Award for Best Actress. 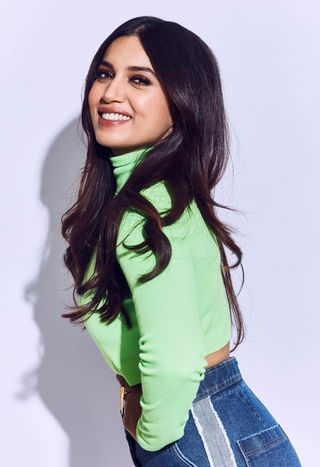 Interestingly, her fans have made a very crucial observation that her characters need to move out of the Hindi heartland. A day after the release of Dolly Kitty..., a fan tweeted: “someone please get Bhumi Pednekar out of the Kanpur, Lucknow, Noida belt.”

The job at YRF did not stop Bhumi from completing her education; she got her bachelor’s degree in commerce through open university in Mumbai. “My family always knew I had the spark and I proved myself too. I did not become an accidental actor. I literally worked towards it,” she says. Bhumi feels that stardom has made her humble and empathetic. At the same time, it has also made her understand the whole deal of showbiz—everything from the paparazzi to the business managers and the entire machinery that works round the clock to make sure she is never away from the public eye. A fashionista at heart, Bhumi loves dressing up every single day to feel happy and upbeat. “I do it for myself because it gives me happiness. I feel self-love is the best expression of oneself,” she says. 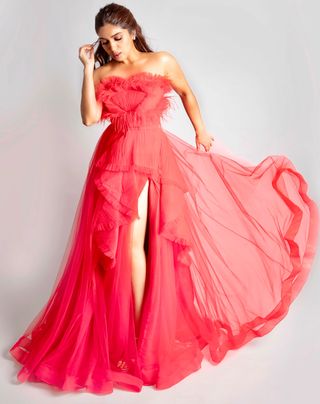 Late last year, Bhumi took to starting a pan-India campaign as a climate warrior to raise awareness about environmental conservation and global warming. “Climate Warrior is my attempt to start a dialogue with people who work tirelessly to save the environment and highlight the crisis that we find ourselves in due to climate change. It is a platform through which I hope to keep reminding people that climate change is real and comes with some serious repercussions.”

She will also be making her point heard through her upcoming characters, including that of an IAS officer in Durgavati—a remake of the Telugu horror film Bhaagamathie (2018)—and historical drama, Takht. One of her biggest desires is to play a freedom fighter in a film. And probably, her desire will be fulfilled soon. After all, India does not have a dearth of women-centric patriotic stories, does it?

The ease and speed with which Bhumi undergoes physical transformations to suit the requirement of characters in her films has been written about a lot, especially since her 20kg weight gain for Dum Laga Ke… and thereafter her gradual weight loss for the succeeding films. “I love working at the gym. I have not attuned myself to yoga. Dumbbells keep me going every single day. I also run when I can. Diet is minus gluten and refined sugar. I am a pure vegetarian. My last meal is between 6.30pm and 7.30pm and my first meal is at about 11 in the morning. Within an hour of waking up, I hit the gym and try to eat less carbohydrates throughout the day as that helps me with my skin and hair. I keep a good count of my macronutrients through the day including proteins, fats and carbohydrates,” she says.