Explore the cave city of Matera

Matera is both heartbreaking and enthralling. This town in the south of Italy, used to be called the “shame of Italy” because of rising poverty levels that led to starvation and death. It is said to be the third-oldest continually inhabited settlement in the world, after Aleppo and Jericho. For 9,000 years, people here lived in caves built into the cliffs. Diseases, particularly malaria, cholera and typhoid, were rampant. Things were so bad that in 1952, the Italian government forced villagers to move out of their caves and into nearby towns with more hygienic living conditions. 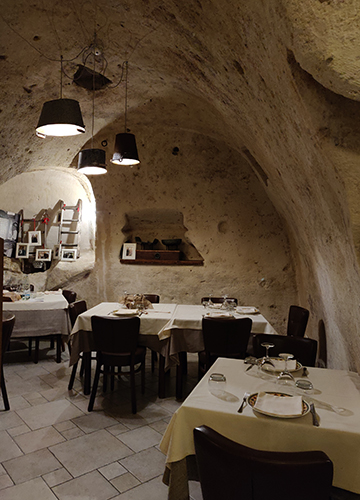 Today, Matera has been carefully restored and brought to life with exquisite hotels, spectacular cave churches, mesmerising art galleries, fascinating hiking paths and Michelin-starred restaurants. It was designated the European Capital of Culture for 2019 and the Sassi di Matera was named a UNESCO World Heritage Site in 1993.

I visited Matera in 2019 as part of a familiarisation trip organised by the Italy Tourism Board. The breathtaking view of homes carved into rock, piled one on top of the other and cloaked in the warm, pinkish glow of the setting sun seemed both surreally beautiful and a little eerie.

Here are the top things you must do if you get to visit this extraordinary city:

Among Matera’s unmissable sights include the sassi (Italian for ‘stones’). It is a network of homes, stores and churches perched on the edge of a steep ravine and connected via narrow paths or stairs. Carved out of the cream-coloured limestone called tufa, the one-room stone homes or caves are an example of ingenious and space-saving designs. Step onto one of the narrow lanes between houses, and you are actually standing on the roof of the house below. Some of these stone homes have now been refashioned as luxury hotels, boutiques, stores and trattorias. 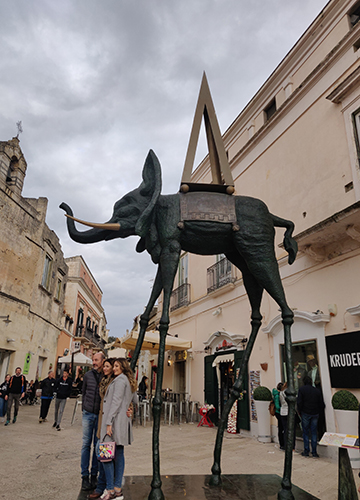 The best way to absorb the history and unique atmosphere of the sassi is on foot, strolling around the narrow cobblestone alleyways and uneven stone staircases. The rewards are manifold—cute courtyards adorned with flower pots, cave churches, tall cactus plants with striking red and green fruit called prickly pears and expansive views of the sassi. Just grab a city map at the hotel reception and follow the signposted walking routes. Or if you want to wing it, it is the perfect place to wander about.

Matera evokes a sense of déjà-vu because the town has been the location for many movies that required a stark, mysterious and primal setting. Mel Gibson chose it as the location for The Passion of the Christ, Pier Pasolini for his The Gospel According to St. Matthew, Bruce Beresford for King David and Catherine Hardwicke for The Nativity Story.

Explore the churches and museums

Matera is dotted with many rock churches. The most vivid of them is the 12th-century Piazza Duomo with its beautiful frescoes and crypts. The platform at the edge of the cathedral square also offers some of the most breathtaking views of the sassi, especially at sunset. The most intriguing is San Pietro Barisano, a 12th-century church that houses underground, narrow passageways with 4-foot niches carved in the walls. Corpses were placed there in wet weather. 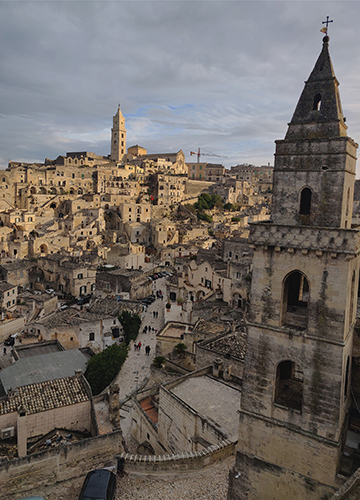 A view of the Sassi | Nivedita Jayaram Pawar

Befitting a capital of culture, Matera has several rewarding museums, including the Archaeological Museum, with a collection of 4th and 5th-century Greek vases and the Museum of Medieval and Modern Art, which includes work by Carlo Levi, whose 1945 book Christ Stopped at Eboli first alerted the world to the living conditions in this part of Italy. But the most compelling is the Museum of Contemporary Sculpture, which one can reach after an uphill, circuitous trek through Sasso Caveoso. The galleries are filled with a wide-ranging collection of mostly Italian works from the end of the 19th century to the present day. Five gigantic bronze Salvador Dali reproductions can be spotted around town, including a melting clock and the giant Space Elephant.

Eat in a cave restaurant

The cuisine of southern Italy is known as cucina povera, or poor man’s cooking, but I found it rich and hearty. Enormous plates of tempting local cheeses, cruschi, a type of fried sun-dried peppers, and prosciutto are served as antipasti. Freshly made pasta, tortellini filled with meat and the unusually-shaped Matera bread made from semolina dough turn up as main meals. Pizzas with weird and wonderful toppings remain everyone’s favourite. Then wash it all down with local aglianico wine, an inky red mineral-heavy wine. The restaurant La Talpa is one of the best places to relish Materan cuisine. Entirely excavated in the rock and formerly used as a dwelling, the restaurant comes with a view of the cathedral. The pizzas cooked in the wood oven are particularly delightful and the espressos are sufficiently potent. 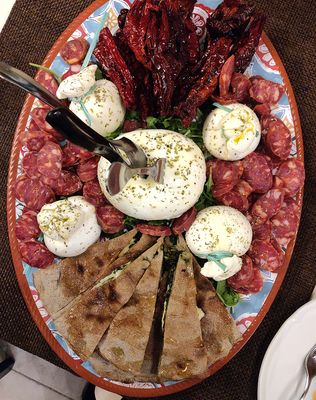 Stay in a cave hotel

The most atmospheric and exotic places to stay in Matera are the cave hotels. Carved out of the rock thousands of years ago, they have been lovingly restored with arched ceilings, contemporary artwork and modern-day comforts. I stayed at The Palazzotto, a 16th-century cave hotel located just a few steps from the historic cathedral. A chic and atmospheric hotel with limestone walls, subdued lighting and views across the sassi from a romantic Juliet balcony. A beautiful way to preserve a piece of history.

❖ Getting around Matera requires walking and climbing stairs. So, bring your walking shoes and prepare to work up a sweat.

❖ Matera is a great place to visit at any time of year, although April to October offers the best weather conditions.

❖ The Central Market is great to pick up pasta and dried peppers. The cucù, a colourful ceramic whistle shaped like a cuckoo, symbolises good luck and makes for an offbeat souvenir.

❖ Matera provides photo opportunities at every turn. Be armed with a camera.

❖ Go hiking. Matera is situated over a ravine and the topography makes the city perfect for hiking and exploring.