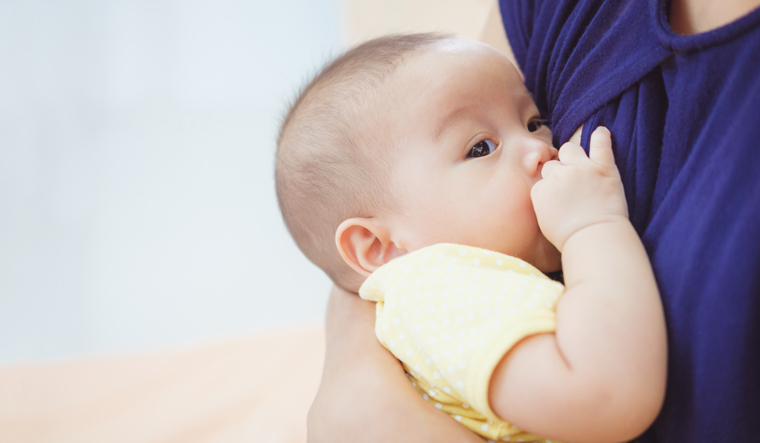 At a time when mankind is grappling with a global health crisis, any form of skin-to-skin contact raises concern. The pandemic has not only brought in panic among people but also a sense of paranoia. Especially among new mothers who have to closely associate with their babies on a daily basis. The act of breastfeeding is said to develop a strong emotional bond between the mother and the baby as it stimulates the release of the hormones serotonin and oxytocin in both of them. Although there has been no case of Covid-19 being passed from the mother to the baby through breastfeeding, precautions are to be taken since they fall in the vulnerable group.

Says Dr Preeti Ganga, IBCLC certified lactation consultant and paediatrician: “Post parturition (childbirth), women are generally low on immunity. Their body systems are in the process of recovering from the load of pregnancy and delivery. The initial four to six weeks are critical when it comes to recovery. During this time, it is best that she stays away from any form of infection. We always tell our patients to avoid visitors during this period. In the background of the pandemic, regular precautions should be taken like washing hands, disinfecting areas of the house that are frequently touched and maintaing respiratory hygiene.”

Some new mothers tend to stop breastfeeding within six months after parturition due to several reasons like inverted nipple, flat nipple and in some cases, women just loathe the experience of nursing their babies. For new mother Maria Philip, the whole act of breastfeeding was overwhelming initially. “The pressure associated with breastfeeding is a real thing and not many women are sensitised about it. I had always planned on nursing my daughter until she turns two but things did not go as I planned. She was born by emergency caesarean nearly three weeks early and my little girl did not really have an understanding of the concept of latching,” she says. As she dreaded even the thought of nursing, she switched to formula milk sooner than recommended. “I started off with formula when my daughter was six weeks. I won’t lie but I was filled with guilt for depriving my baby of all the nutrients she could get through the breast milk. This is the time when the country went into a complete lockdown and things just got harder. It had been over two weeks since I stopped lactating and I felt that I had dried up completely,” Maria says. Although relactating is something that most mothers don’t talk about or consider doing, the low availability of formula milk got many new mothers thinking.

According to Dr Mahima Bakshi, woman and child wellness consultant and author of Birthing Naturally, relactation is possible in case of a mother who has stopped lactating for about four to six weeks. “It is important for the mothers to stay calm as stress reduces milk supply. High levels of stress in breastfeeding mothers can lead to a difficult let-down reflex. Considering the pandemic stress, I think mental health of mothers is something that should be taken seriously. New mothers should engage in yoga, music therapy and other relaxation techniques in order to prevent post-natal depression as well. As a matter of fact, early weaning is a result of stress and depression,” she says. Nutritional deficiency is another factor that reduces milk supply is deficiency. Nourishment is a must not just for a new born but also for a new mother. “Deficiency is a common problem among women after parturition. It can be anything—vitamins, proteins or good fats. I usually ask women to consume a calcium-rich diet, lots of fruits with natural vitamins (minimum of three fruits a day) and high protein meals. It not only helps with postpartum stress but also improves the immunity of the mother. Post-natal exercises also help in strengthening the immune system,” says Mahima.

She also emphasises on the importance of holding the baby close to the mother as it stimulates the release of hormones that support breastfeeding and mothering. “There are natural microbiomes present on the mother’s skin and skin-to-skin contact increases the baby’s immunity. It enables colonisation of the baby’s skin with the mother’s friendly bacteria, thus providing protection against infection,” she says. Skin-to-skin contact is also said to relax both the mother and the baby. The act regulates the baby’s heart rate and breathing, helping them to better adapt to life outside the womb. 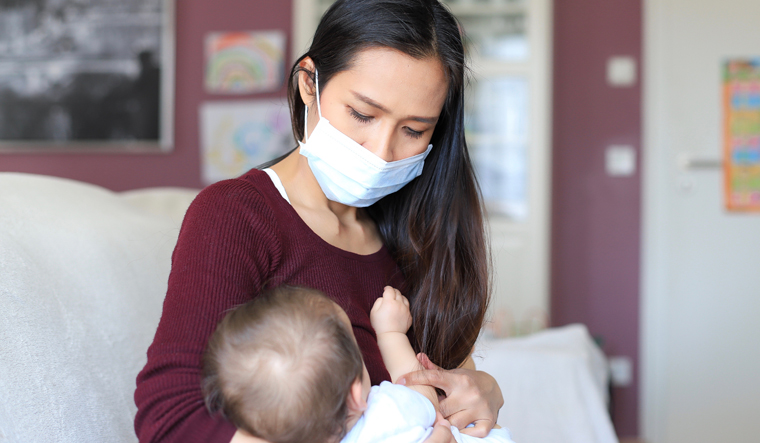 Although it is important for the mother to have a regular physical contact with her baby, there is also a fear of infections being transmitted through this touch. The coronavirus infection does not affect the foetus adversely, in terms of causing miscarriages or any other abnormality but women who are in their third trimester affected by the virus have a higher risk of getting into preterm labour. There is no clarity on whether the baby can get affected by the virus during labour. According to Preeti, a child’s immune system is not completely developed until the age of two and hence, it is essential for the child to be protected against any form of infection, be it Covid-19 or any other virus. “There are a lot of antibodies present in the breast milk but a child can get Covid-19 antibodies from the milk only if the mother has been exposed to the virus and has recovered from it,” she says.

In the absence of breast milk or formula, Preeti says cow’s milk or
buffalo milk can be given as substitutes. Though Mahima firmly believes that mothers should try to relactate, given a situation where the mother cannot feed her child, she suggests on considering options like expressed milk or getting milk from donor milk banks.

❖ Stay calm: Stress usually increases the cortisol levels and this can have negative effects on the milk production. Also, don’t pressure the baby to suckle. Be optimistic and give the body time to adjust.

❖ Commit to pumping more: Milk production is based on demand and supply. So, the more you stimulate or pump, the more milk will be supplied. In case the baby does not latch, try using a hospital-grade breast pump to stimulate the nipples. Aim for 20-30 minute sessions every two to three hours with two of those sessions happening at night.

❖ Skin-to-skin contact: Make sure that the baby is close to the mother as this enables the child to familiarise with the process of relatching which will aid the process of relactation. The hormones released during the physical contact will not only relax the mother but also enable her to produce more milk.

❖ Drink a lot of water: It keeps you hydrated which is crucial for milk production. If the body is not hydrated, then it will not have enough fluids to produce. Drink at least 10-12 glasses of water every day.