Teresa: Now a saint, but always a mother 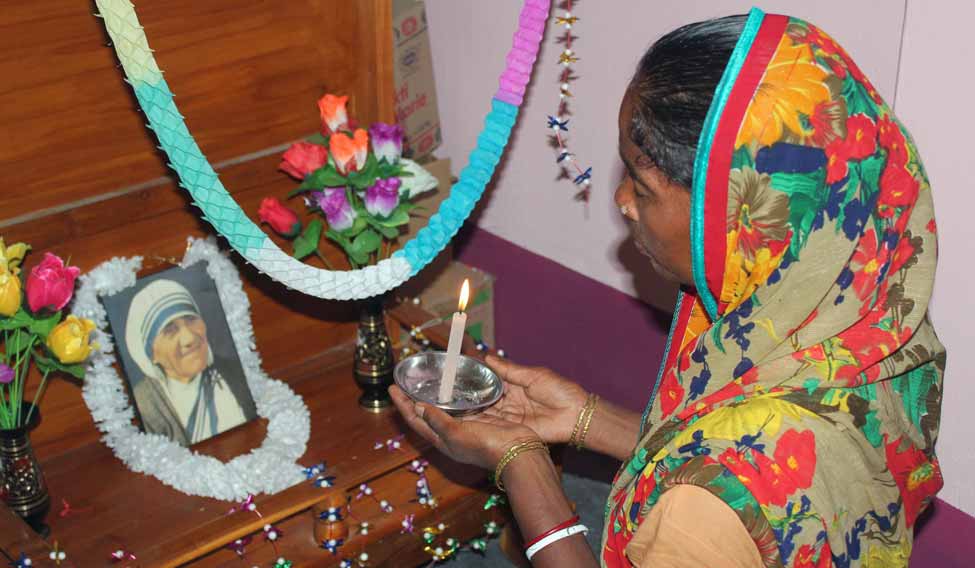 A woman prays inside a church in Danogram | AFP

Pope Francis on Sunday proclaimed Mother Teresa of Kolkata a saint, hailing her as the personification of maternal love and a powerful advocate for the poor.

"We may have some difficulty in calling her 'Saint' Teresa," the pontiff said. "Her holiness is so near to us, so tender and so fruitful that we continue to spontaneously call her Mother."

He added: "She made her voice heard before the powers of this world, so that they might recognize their guilt for the crime - the crimes! - of poverty they created."

The unscripted comments came at a canonisation mass attended by 100,000 pilgrims, including 13 heads of state or government and hundreds of sari-clad nuns from Teresa's order, the Missionaries of Charity.

Queen Sofia of Spain and some 1,500 homeless people also looked on as Francis described Teresa's work in the slums of the Indian metropolis as "eloquent witness to God's closeness to the poorest of the poor."

To applause, he added: "Mother Teresa loved to say, 'perhaps I don't speak their language but I can smile'.

"Let us carry her smile in our hearts and give it to those whom we meet along our journey, especially those who suffer."

The joyful celebratory atmosphere in the Vatican was mirrored in Kolkata, where candles and flowers were laid on Teresa's tomb at the headquarters of her order. "It is a day of rejoicing, a day of gratitude and a day of many, many blessings," senior sister Mary Lysa said.

Francis also used his sermon to recall Teresa's fervent opposition to abortion, which she termed "murder by the mother" in a controversial Nobel Peace prize speech in 1979.

She "ceaselessly proclaimed that the unborn are the weakest", he said.

The ceremony came on the eve of the 19th anniversary of Teresa's death in Kolkata, where she spent nearly four decades working in wretched slums.

With the 16th century basilica of St Peter's glinting in the late summer sun, Francis led a ritual mass that has barely changed for centuries.

Speaking in Latin, he declared "blessed Teresa of Calcutta (Kolkata) to be a Saint ... decreeing that she is to be venerated as such by the whole Church."

After the mass, the 79-year-old pontiff boarded an open-topped jeep and toured around St Peter's square and surrounding streets to a rapturous reception from tens of thousands of well-wishers.

Solangel Rojas had come from Cali in Colombia. Clutching a picture of Teresa to her heart, she said: "It is wonderful that she has been canonised. She was an example to us all."

Among those in the front rows at the mass were 1,500 people from shelters run by the Italian branches of Teresa's order. Later they were Francis's guests for a giant pizza lunch served by nuns and priests.

Teresa spent all her adult life in India, first teaching, then tending to the dying poor.

It was in the latter role, at the head of her now worldwide order, that Teresa became one of the most famous women on the planet.

Born to Kosovan Albanian parents in Skopje - then part of the Ottoman empire, now the capital of Macedonia - she won the 1979 Nobel Peace Prize and was revered around the world as a beacon for the Christian values of self-sacrifice and charity.

But she was also regarded with scorn by secular critics who accused her of being more concerned with evangelism than with improving the lot of the poor.

The debate over Teresa's legacy has continued after her death, with researchers uncovering financial irregularities in the running of her order and evidence mounting of patient neglect, insalubrious conditions and questionable conversions of the vulnerable in her missions.

By historical standards, Teresa has been fast-tracked to sainthood. John Paul II was a personal friend and as the pope at the time of her death, he was responsible for her being beatified in 2003.

Achieving sainthood requires the Vatican to approve accounts of two miracles occurring as a result of prayers for Teresa's intercession.

The first one, ratified in 2002, was of an Indian woman, Monica Besra, who says she recovered from ovarian cancer a year after Teresa's death - something local health officials have put down to medicine rather than prayer.

In the second, approved last year, Brazilian Marcilio Haddad Andrino says his wife's prayers to Teresa led to brain tumours disappearing. Eight years later, Andrino and his wife Fernanda were in the congregation on Sunday.

Many Indians made the trip to Rome, among them Abraham, an expatriate living in London, who said Teresa's life had set a unique example to the world. "She practised Christianity. The majority of Christians only spend their time talking about it," he said.

Your form could not be submitted.
This browser settings will not support to add bookmarks programmatically. Please press Ctrl+D or change settings to bookmark this page.
Topics : #Mother Teresa