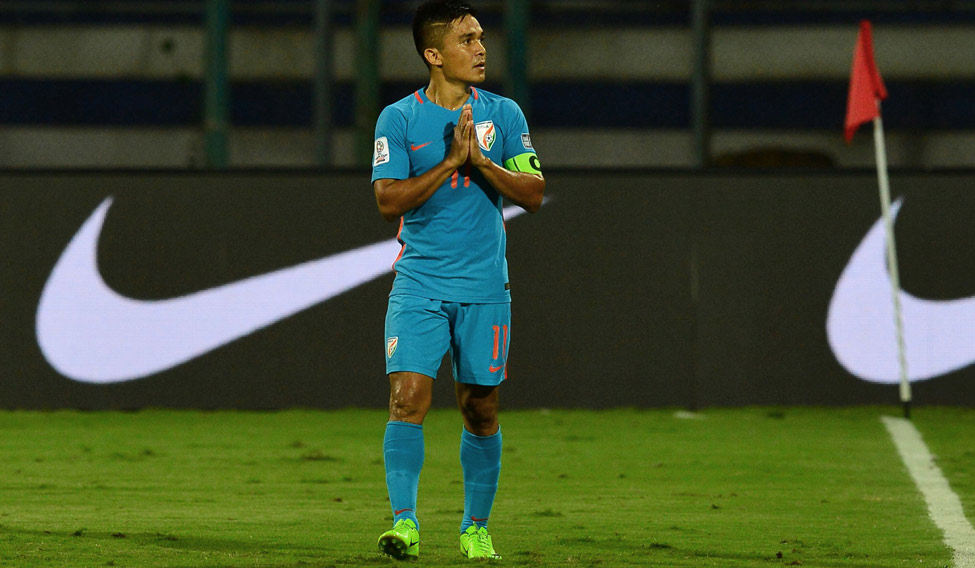 Indian football team captain Sunil Chhetri became the fourth highest active international scorer on Tuesday, when he struck a decisive goal to guide his side to a 1-0 win over Kyrgyz Republic in a fast-pace and entertaining AFC Asian Cup qualifier match.

Chhetri scored his 54th international goal in 94 matches to snatch all three points from the 'favourite' Kyrgyz Republic and to stay atop the Group A, having bagged six points from two matches.

His 69th-minute goal proved enough to take India one step closer to break into the AFC Asian Cup after eight years.

On a counter-attacking move, Sunil dodged three opponent defenders and whizzed past them to put a through ball to Jeje Lalpekhlua.

Lalpekhlua minused it to his captain who eventually put it at the back of the net to send the 6000-strong spectators into a delirium.

With the 54th goal in bucket, Chhetri surpassed England's star player Wayne Rooney who now sits on the fifth position with 53 goals.

It is under coach Stephen Constantine that India have also improved their FIFA rankings to stand in the top 100 for the first time in two decades.

India will now travel to Macau for their third match in the AFC Asian Cup UAE 2019 Qualifiers on September 5, 2017.

Your form could not be submitted.
This browser settings will not support to add bookmarks programmatically. Please press Ctrl+D or change settings to bookmark this page.
Topics : #football | #Wayne Rooney | #Sunil Chhetri