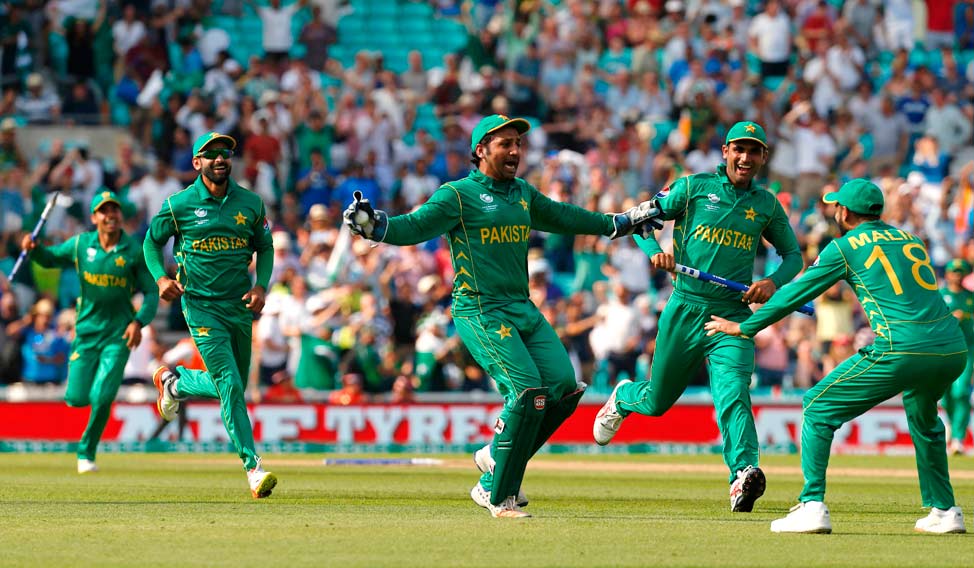 Pakistan came up with a splendid all-round performance to thrash favourites India by 180 runs in the final of the Champions Trophy at The Oval. Chasing a huge target of 339, India were bundled out for 158 in 30.3 overs. Pace spearhead Mohammad Amir blew away the Indian top order with three crucial wickets, while Hasan Ali and Shadab Khan chipped in with three and two wickets respectively.

For India, Hardik Pandya fought a lone battle, scoring a 43-ball 76, which was studded with four 4s and six 6s.

The frailties of the Indian middle order were rudely exposed by the Pakistan bowlers in the much-anticipated clash. With the top three batsmen—Rohit Sharma, Shikhar Dhawan and skipper Virat Kohli—having scored more than 80 per cent of the runs for India, the question on everybody's minds was that whether the middle-order can come good when needed.

The Indian openers have been in prime form throughout the tournament, with two century and a half-century partnerships. However, in the third ball of the first over, Amir swung one back into Sharma, catching him plumb before the wicket. Sharma, rightfully, decided against reviewing the decision.

The Indian skipper walked in to a huge roar, but, in Amir's second over, nicked one straight into the hands of first slip, where Azhar Ali made a mess of a regulation catch. But Kohli's luck was short-lived, as, off the very next ball, his attempt to flick one on to the leg side resulted in a leading edge to the point position, where Shadab Khan made no mistake.

Amir, who sat out of the semifinal against England due to a “back spasm”, came back into the team at the expense of Rumman Raees, who took two wickets in his debut match against the hosts.

Shikhar Dhawan and Yuvraj Singh tried to bring some sanity into the proceedings with a 27-run partnership. But Amir returned in the ninth over to dismiss Dhawan, drawing him to edge one into the hands of Pakistan wicketkeeper and skipper Sarfraz Ahmed. The score read 33-3.

In came ex-Captain Cool, and Dhoni, in Yuvraj Singh's company, set about building a partnership. However, 21 runs later, spinner Shadab Khan got one to turn into Yuvraj (22) catching him leg-before-wicket in the 13th over. Though given not out on the field, the decision was reversed after Pakistan reviewed it.

The next over, Dhoni top-edged a pull of Hasan Ali for four runs, to leave India reeling at 54/5. Kedar Jadhav, too, joined the procession a couple of overs later, falling to Shadab Khan for nine.

Though, Pandya and Ravindra Jadeja (15) delayed the inevitable with an 80-run partnership, the target proved to be too much for the defending champions, especially after the former was run out in the 27th over.

Earlier, put in to bat, Pakistan rode on opener Fakhar Zaman's maiden ODI century and quickfire half-century from Mohammad Hafeez to set India a stiff target of 339. While Zaman made 114 off 106 balls, Hafeez belted four 4s and three 6s in the 37-ball 57. Imad Wasim chipped in with 25 to take Pakistan to 338/4.

It was a big turnaround for the Men in Green, who lost by 124 runs against India in the group stage of the tournament on June 4.

Zaman was named Man of the Match, while Hasan Ali got the Golden Ball (13 wickets) and was selected the Player of the Tournament. Dhawan, who made 338 runs in the Champions Trophy, got the Golden Bat award.

Your form could not be submitted.
This browser settings will not support to add bookmarks programmatically. Please press Ctrl+D or change settings to bookmark this page.
Topics : #cricket | #Champions Trophy