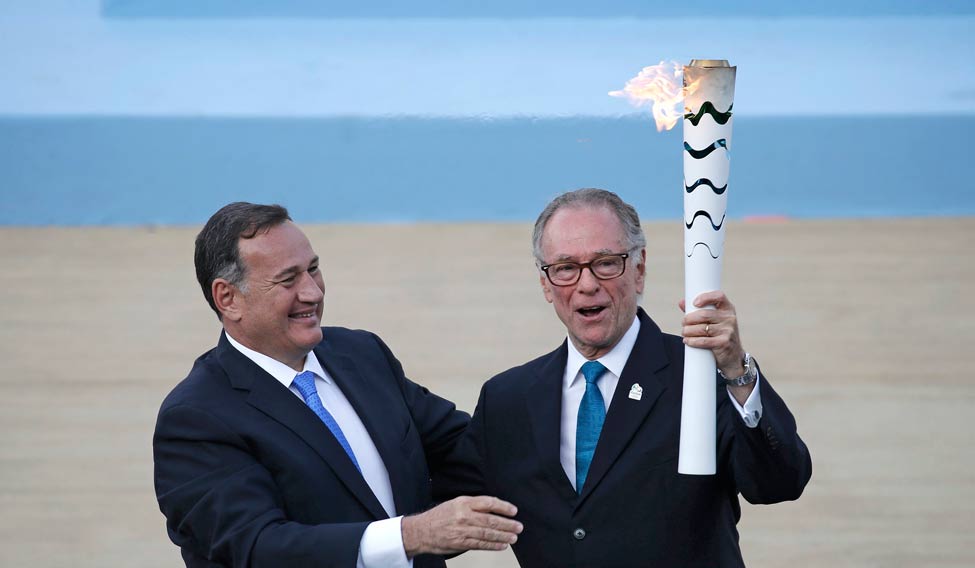 Spyros Capralos, head of the Hellenic Olympic Committee (L), hands over an Olympic torch to Rio's Olympic chief Carlos Nuzman during the handover ceremony of the Olympic Flame to the delegation of the 2016 Rio Olympics, at the Panathenaic Stadium in Athens, Greece, April 27, 2016 | REUTERS

The flame that will burn for Rio Olympic Games was handed over to the Brazilian organisers in a spectacular ceremony held at Panathenaic Stadium in Athens.

At the marble venue of the first modern Olympics in 1896, Hellenic Olympic Committee president Spyros Capralos passed the Sacred Flame to the president of the Rio 2016 Organizing Committee Carlos Nuzman on Wednesday, wishing best success to the XXXI Games, Xinhua news agency reported.

"We are handing you over the Flame to carry it to your beautiful country. We are entrusting you with a part of our history, a part of our culture," Capralos had said earlier addressing the event.

"Conveying the feelings of the whole Olympic family in Greece, those of the members of HOC, of our athletes and of all Greeks as well, I would like to wish you our very best for a most successful organization of the XXXI Olympic Games," he stressed.

In his address Nuzman underlined that it was the first time in history that the Olympic Games will be held in South America symbolising the Olympic movement's timeless values of excellence, friendship and respect.

"We understand our responsibility as guardians of the Olympic Flame. The size of the tasks ahead obliges us to move forward rather fast. August is approaching like a flash. When you arrive in Rio, our culture will host you with charm. There will be plenty of music, poetry, love, excitement," Nuzman said.

"Let's celebrate together. We have plenty of reasons to be happy. We are building a better future for the boys and girls of the planet. That is the future we have been dreaming of. Certainly the future we deserve," he concluded.

Nuzman left the stadium with the Sacred Light under the warm applause of some 30,000 Greeks and foreign tourists who had flooded the site.

Greek President Prokopis Pavlopoulos, international Olympic movement representatives, and Olympic medalists were also among the crowd that welcomed warmly the Olympic Flame when it entered the stadium.

The Sacred Light was carried by the Greek silver medalist in high jumping in the 1996 Atlanta Games Niki Bakogiannis, after having crossed a large part of Greece (about 2,200 km) over the past week.

Your form could not be submitted.
This browser settings will not support to add bookmarks programmatically. Please press Ctrl+D or change settings to bookmark this page.
Topics : #Rio Olympics 2016