If there were a fashion show for smart-phones, the newly launched Samsung Ganlaxy S8 and S8+ would definitely be the show stoppers. The Korean smartphone maker has designed these two devices to take your breath away. Both, the 5.2 inch S8 and the slightly bigger 6.2-inch S8+ , come with a bezel-less screen, called the infinite display. The devices have an all-screen, glass body with rounded edges, even the physical home button has been moved as a soft key into the screen.  Samsung has stretched its display aspect ratio from a regular 16:9 to 18.5:9 in both these devices, which gives you a bigger screen for watching videos or playing games. Yet, the devices feel sleek and fit easily in your palm. The devices have Corning Gorilla Glass 5 for protection. 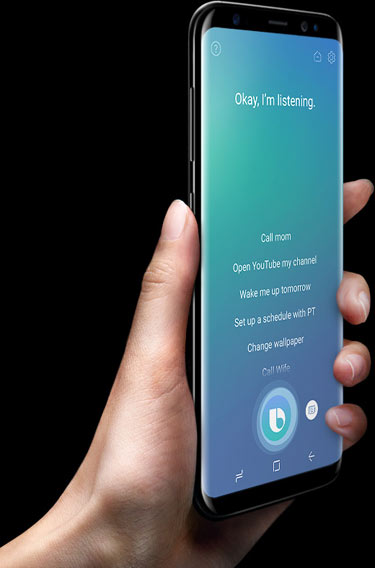 Due to the all-display front, Samsung has shifted its fingerprint senor to the back, right next to the rear camera. This is bit of an inconvenience, as sometimes  you may end up tapping and smudging the camera lens instead of the fingerprint sensor. But the good news is that both these devices also come with face recognition and the iris scanner. So if you find finger-print security too cumbersome, you can always open your device with your eyes or face. Another major change is the replacement of the physical on - off button with a soft switch on the screen. However haptics ensure it gives you a 'kick'.

The Galaxy S8 and S8+ feature a 12 megapixel rear camera and an 8 megapixel front camera. Even though the resolution may seem slightly on the lower side, the picture quality of both the cameras is quite impressive. The rear camera has an F 7.1 aperture with dual pixel sensor and can record 4K videos. While the front camera too has the same aperture size, it also comes with smart auto-focus and multiple facial recognition for groupies.

Samsung has introduced an all new virtual assistant, Bixby, in these two devices. Just like any other assistant, this too will act on your command via voice, text, or touch. But the interesting feature is that it is able to use the camera and analyze images through artificial intelligence to get results accordingly. There’s also a dedicated button on the left side of the S8 and S8 Plus that will instantly connect to Bixby.

Both the devices run on Samsung’s Exynos 8895 processor with the first generation 10nm chip-set. They are powered by the latest Android 7.0 Nougat, and have 4GB RAM. The internal memory of 64 GB is expandable up to 256 GB. The devices have a hybrid slots that can either accommodate two SIMs or a single SIM with a memory card.

After the Note 7 debacle, the company has cautiously maintained a comparatively low power battery for the S8 and S8 Plus, which is 3000 mAh and 3500 mAh, respectively. Samsung also confirmed that the devices have undergone intensive tests under their 8-point battery safety check that addresses the over-heating issue.

The difference between the Galaxy S8 and Galaxy S8+ is the screen size and the price, where the former costs Rs 57,900 and the latter Rs 64,900.  If you are willing to splurge a bit then both these devices are worth for their design and build quality along with few interesting software features.

Samsung has also announced compatibility of these two devices with their digital payment solution, SamsungPay. The devices will be available from May 5, 2017.

Your form could not be submitted.
This browser settings will not support to add bookmarks programmatically. Please press Ctrl+D or change settings to bookmark this page.
Topics : #Samsung