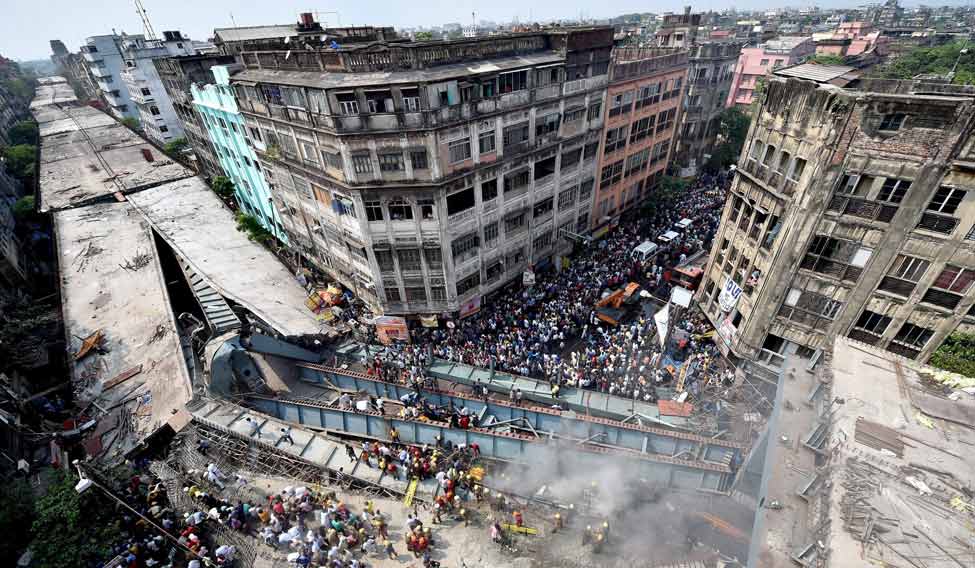 Lack of proper planning, delays, lacunae in design and bad tendering may have triggered the collapse on Thursday of a 100-metre section of an under-construction flyover, leaving at least 14 dead and many injured, said engineering experts.

The long-delayed 2.5-km Vivekanda flyover under the Jawaharlal Nehru National Urban Renewal Mission was expected to tackle congestion in Burrabazar area - the location of one of the largest wholesale markets in Asia - up to the Howrah station, the gateway to the city.

Shocked at the incident, Indian Institute of Technology-Kharagpur (IIT-Kgp) architecture faculty Joy Sen, who is "very familiar" with the heavily-congested area, said such large-scale projects are executed in phases and if time is not taken into consideration, then it becomes risky.

"Phasing of construction and time and use of materials are interlocked. If these things are not done on time, then construction like these which are exposed to weather becomes very risky.

"They have a time schedule and you cannot delay with these projects. You need proper planning and you can't play with human lives," Sen, a professor and head of architecture & regional planning department at Ranbir and Chitra Gupta School of Infrastructure Design and Management, IIT-Kgp said.

Expressing concern over the quality of construction and tendering practices, Sen said: "It should be based on experience and shouldn't be simply handed over to a firm which quotes the lowest price."

"There can be many reasons for the collapse of a under construction flyover. It seems there may be some problems related to stability. There may be insufficient steel girders used or faulty placement of steel girder could lead to this collapse," Niyogi, a professor at Jadavpur University's civil engineering department, said.

Niyogi who specialises in structural and bridge engineering, also said there might be some defects in design and construction.

"Since the concretisation was done yesterday (Wednesday), the concrete remains in a weak state in which it has weight but has not acted as the load-bearing structure," he said.

Locals attested to the fact concretisation was carried out on Wednesday night and complained the project overall has been riddled with problems.

It was scheduled to be completed in 2012 but land acquisition issues delayed its completion. The implementing agency too ran into financial troubles.

Your form could not be submitted.
This browser settings will not support to add bookmarks programmatically. Please press Ctrl+D or change settings to bookmark this page.
Topics : #accident