The Great Game: India, China and the unsettled border disputes 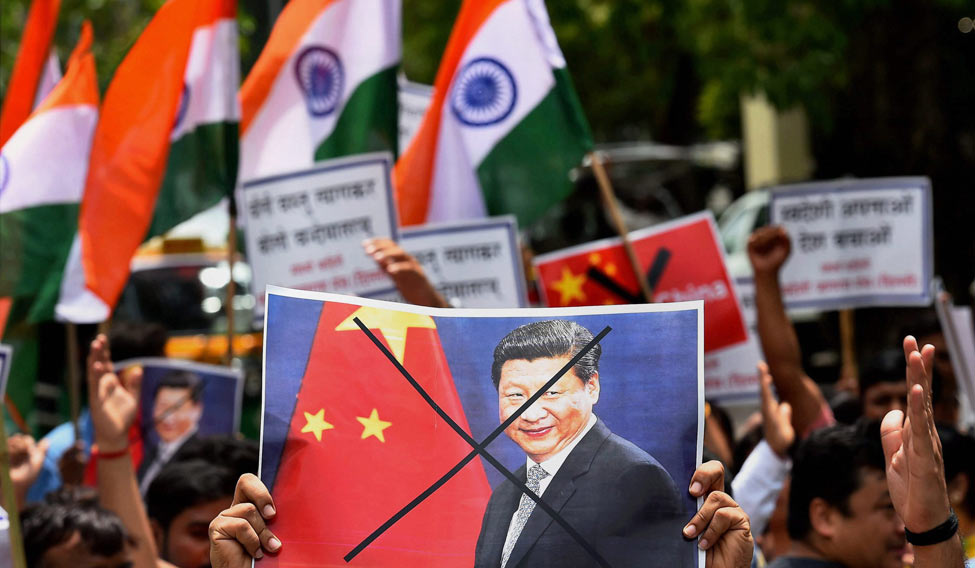 (File) Protests against China, after its perceived aggression in the border, in India | PTI

Can India and China talk their way out of Doklam? Many believe that the military-diplomatic gridlock that the two countries are enmeshed in should also lead to a negotiated settlement once fatigue sets in. But a long-term resolution of the border dispute? Way off.

The reason is simple. As time passes, both sides are only hardening their positions. A close study of the evolution of the border dispute bears this out—that that positions aren't easing over time. On the contrary, they are only hardening. Time, it appears, is no great healer when it comes to negotiating over hurts of the past, traded between states over territorial disputes.

The India-China boundary dispute has been studied by a galaxy of scholars, with researchers stumbling into one discovery after another. Now, an Indian scholar, Dr Joe Thomas Karackattu of IIT Madras, has pored through papers in the India Office Records (in London) and other documents, and published his findings in a research paper titled 'India–China Border Dispute: Boundary-Making and Shaping of Material Realities from the Mid-Nineteenth to Mid-Twentieth Century' in the Journal of the Royal Asiatic Society.

The paper reveals that both India and China have begun negotiations in a conciliatory mood, but “currently, India and China hold on to an absolute reversal on the initial relatively conciliatory understanding.” Today, “China claims the entire Arunachal Pradesh while India retains the Ardagh–Johnson alignment with respect to the whole of Aksai Chin....” Both started off refuting traditional boundaries, but swear by them today.

The dispute has its origins in the Great Game, the geo-strategic chess game played by the mutually suspicious British and Russian empires in Central Asia in the 19th century. Until the mid-1870s, the British had left the control of the lands north of Kashmir valley in the hands of the Maharaja of Kashmir, exercised through his governor in Gilgit. Russia obtained the area near Great Karakul Lake by the treaty of St Petersburg in 1881, and built rail tracks and roads in the area.

The Great Game strategising threw up a few solutions. One was the 'forward school' which advocated the Kunlun range as the boundary, implying that the areas till then looked upon as neutral states would be included within India. The other was to exclude Aksai Chin from India, but retain a part ( of the Lingzi Tang plains). In 1899, Sir Claude MacDonald, British minister in Peking, wrote to the Chinese foreign office defining the boundary of India with China in the western sector. This remains the only official communication from the British government to the Chinese government. This line came to be known as Macartney-MacDonald Line, the latter name having been lent by Sir George Macartney who was special assistant for Chinese affairs. This showed Aksai Chin as a part of Kashmir.

At the turn of the century came George Nathaniel Curzon as the viceroy of India, with his own visions of defining and securing India's strategic perimeter. The lines were modified in 1905 and 1912, when the Qing dynasty in China was collapsing, but none of these changes were communicated to the latter. In effect, it was a reversion to the forward school.

The boundaries were again redrawn in 1927 when India gave up claims north of the Karakoram watershed on the basis of a variant of the Macartney–MacDonald line, thus excluding large swathes of Aksai Chin. The maps of 1929 showed Aksai Chin (located in Sinkiang) as partly based in Tibet. These maps were based on multiple sources including Survey of India sheets, inputs from surveyors and Russian staff maps.

Fast forward to the post-colonial India and post-Kuomintang China. China’s claim of what it perceives as its “traditional customary” was shown in the map appended to Premier Zhou Enlai's letter to Asian and African leaders dated 15 November, 1962. The map showed the India-China boundary as a line which dips south sharply from the Karakoram Pass to the east of the 78° E longitude. It also showed the tri-junction of Kashmir, Xinjiang and Tibet at Kongka Pass; the boundary cut Pangong Lake at its widest stretch. Strangely, other official maps issued by China did not conform to this one. They showed Pangong lake being split at its narrowest between India and China.

The disputes in the eastern sector too had their origins in the 19th century. Tibetan agression on the Sikkim borders had led to the Anglo-Chinese Agreement of 1890, which the Chinese were expected to enforce on Tibet. A process was initiated to settle the location of border pillars and demarcate the Sikkim–Tibet frontier, but it didn't take off because the British found that the Tibetans were resorting to obstructionism, and the Chinese, by then a declining power, were uninterested.

But when two British subjects were arrested by the Tibetans and tortured to death, Curzon sent the famous expedition under Colonel Fancis Younghusband. The expedition ended in the 1904 Anglo-Tibetan treaty and with the occupation of Chumbi valley. The treaty also enjoined on Tibet to be virtually a protectorate of India. In the subsequent Calcutta talks, the British insisted that China had only 'suzerainty' over Tibet and not 'sovereignty'. The debate continues to this day.

By now, the Great Game with Russia was peaking. The British suspected that, with China weakening, the Dalai Lama was colluding with Russia. As the Nationalist Republic replaced the Qing dynasty in China, the British organised a conference in Shimla to settle once and for all the issue of Tibet’s status under international law. India was represented by Henry McMahon who would later lend his name to the boundary line. The Chinese representative too signed the subsequent treaty, but China would later repudiate the same. This led to much bullying and drafting of another treaty. Finally, as China refused to sign it, the British concluded a bilateral treaty with Tibet.

According to Karackattu, “the process of arriving at the McMahon line may be questionable, but the basis of the line vis-a-vis the southern limit of Tibet was not contested by China at any time, nor did it record any objection to the lines dividing Tibet and India...”

The paper concludes that the political statements in the early stages of the dispute had showed much more flexibility on both sides. For instance, the Chinese plenipotentiary at the Simla conference, in no uncertain terms, stated that “it is fair to conclude that present-day narratives on boundaries that stress on traditional and customary evolved over time. From a theoretical perspective, the political importance of these premises did not lie in their being ‘true’, or in the claim being ‘real’ or even the lines being consistent, but in their being shared by a process of political selection and then being rectified as ‘taken for granted’.” In other words, he was conceding that the lines were mutable.

There was much flexibility in the initial positions articulated by political leaders too. For instance, Prime Minister Jawaharlal Nehru said about the western sector that “the actual boundary of Ladakh with Tibet was not very carefully defined. It was defined to some extent by British officers who went there. But I rather doubt they did any careful survey. They marked the line. It has been marked all along in our maps. They did it. As people do not live there, by and large, it does not make any difference. At that time, nobody cared about it.”

The Chinese too were flexible. In 1960, Zhou Enlai told Nehru: “Since we are going to have friendly negotiations, neither side should put forward claims to an area which is no longer under its administrative control. For example, we made no claim in the eastern sector south of the McMahon Line, but India made such claims in the western sector".

Though Zhou inisted on maintenance of status quo, Deng Xiaoping tried to be flexible. As Karackattu observes, “Deng’s articulation that China 'never asked for the return of all territory illegally incorporated into India by the old colonialists after independence' is linked to, and yet at variance with, China’s subsequent articulations on Arunachal Pradesh (beyond just Tawang).”

“In many ways,” observes Karackattu, “the intractability in the understanding today between India and China on boundaries as being fixed and unchangeable, valorised for national pride, ... emerge[s] from institutional facts that exist within systems of constitutive rules.”

Your form could not be submitted.
This browser settings will not support to add bookmarks programmatically. Please press Ctrl+D or change settings to bookmark this page.
Topics : #India | #China