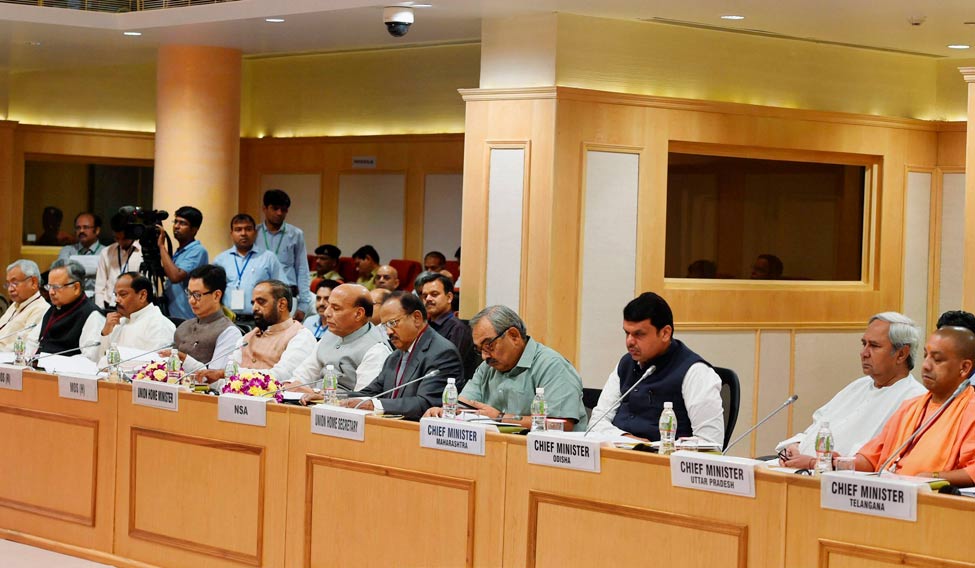 A fortnight after the Maoists killed 25 CRPF jawans at Sukma in Chhattisgarh in one of the deadliest attacks in recent years, the Narendra Modi government at the Centre has come up with a fresh acronym for combating left wing extremism. SAMADHAN was touted as the new anti-Naxal doctrine of the NDA government at a high level meet called by Home Minister Rajnath Singh with chief ministers and police chiefs of ten Maoist-affected states on Monday to discuss the way forward to combat the biggest threat to internal security.

No Army deployment, no air strikes and no new strategy. In fact, SAMADHAN, which means "solution" is actually an action plan the UPA -II government had explored in the past—developing infrastructure, fast tracking central schemes and asking states to coordinate in joint operations with the central paramilitary forces deployed in the red zone.

Already, more than 4000 police personnel are being trained every year by Army and Greyhounds and will continue to do so. The UAVs are already being used for anti-Naxal operations and the IAF is assisting the logistical movement of security forces. Similar efforts and some tweaking at best are what the central government has to offer.

On Monday, Singh said, "The most important thing is that officers will have to lead from the front. Success cannot be achieved sitting in Delhi, Ranchi and Raipur.” The home minister pitched for a unified command and control in LwE affected areas. Along with strategic command, unified command is also needed at the operational and tactical level. Intelligence sharing is also important, he said.

But the start was rough for Rajnath Singh as state chief ministers like Mamata Banerjee (West Bengal), Chandrababu Naidu (Andhra Pradesh) and K. Chandrashekhar Rao (Telangana) gave the meeting a skip. However they sent their representatives. Incidentally, both West Bengal and Telangana are witnessing an increased activity of the rebels who are either using these states as a shelter or transit route or for running frontal organisations, security sources said.

For Rajnath Singh and his government, SAMADHAN was still possible and it meant a combination of Smart Leadership to convert failure into success—Aggressive Strategy, Motivation and Training, Actionable Intelligence, Dashboard Based KPIs (Key Performance ​​​Indicators) and KRAs (Key Result Areas), Harnessing Technology, Action plan for each Theatre and No access to Financing.

In short, it meant back to the basics. What was new was a committee being set up under the union home secretary for technological push and strategy for the naxal areas. So the committee led by Rajiv Mehrishi would also look into implementation of old schemes, which have witnessed a slow pace so far with new problems cropping up every time.

The slow pace was not only being witnessed in developmental activities. Even the CRPF which has witnessed two ghastly incidents of Naxal attacks in Sukma in the last two months has not submitted its inquiry report to the MHA. The report was expected to document the lapses, if any, and shed light on how the casualties took place so that the force could hone its operational skills for the future. Mehrishi has now asked the CRPF to submit the reports within a week. Mehrishi said that there is no decision to use the Army or press air operations against the Naxals. However, he said that a new airport at Jagdalpur would be made operational soon, from where flights could go to Vizag. This would essentially help in logistical movement to assist the central forces deployed for anti-Naxal operations and also help in evacuation during operations.

There have been instances in the past when the Naxals hit security forces but their evacuation from the forests took time, something which the forces have been raising time and again with the home ministry.

At the meeting, which was attended by National Security Advisor Ajit Doval, Union Defence Secretary, Director Intelligence Bureau Rajiv Jain, DGs of central armed police forces, collectors and SPs of the 35 worst affected districts and other senior officers of central and state government, the home minister said, “I am concerned but not perturbed by the attack on the CRPF camp by the Left Wing Extremists. Today’s meeting is therefore important because we have to consider and deliberate in totality, as to what would be our thinking, our strategy, our preparedness and how we have to use our resources.”

He said 12,000 citizens have lost their lives to LWE. More figures reveal that out of these, 2,700 were jawans of security forces and remaining 9,300 were civilians. But even as the home ministry explained that the LWE threat needed an out of the box approach, the meeting recognised that there was a need for states like Chattisgarh, where BJP's Raman Singh is at the helm, to pull up their socks. In comparison to Andhra and Telangana, the technical Intelligence Inputs in Bastar zone are very low and this is because there is only 20 per cent connectivity in the region. It is only four per cent in district like Sukma. This rang alarm bells in the government which is now trying to push technology in every sphere.

With the current use of UAV being ''sub-optimal'', there will now be more drones pressed into service at the right places. Use of MINI UAVs, high resolution PTZ Cameras, GPS Tracking, Handheld Thermal Imaging, Radar, Satellite Image, Trackers in Weapons, Biometrics in smart gun triggers and also trackers embedded in shoes and bullet proof jackets will be seen in the coming days. On all these counts, the Central government will loosen its purse strings to help the states. As far as intelligence gathering is concerned, Shadow Intelligence Officers will be deputed to trace the prominent Maoist leaders and surrendered Naxalites will be used judiciously in such efforts. Moreover, recognising that the LWE threat was different in different states, the security forces will create specific action plan for each of such fronts, in order to achieve success on a systematic basis.

The government will also create systems to enforce usage of Unique identification numbers in Gelatine and other explosive materials. Existing provisions under the Explosives Act as well as the Prevention of Money Laundering Act will be used effectively to monitor the transportation of explosive substances even as the latter will be used to choke the funding of the Maoists. The home ministry even referred to the demonitisation move of the Modi government to explain how the prime minister had promised that the move would dry out the fund supplies of the Maoists. But the twin attacks this year, clearly show that the naxal threat is bigger than it has been perceived so far.

While statistics, which were used as the indicators shared at the meeting, may have been documented by the government at the meeting to pat itself on the back saying that the year 2017 has shown a decline in Naxal incidents, the fact that the government is reworking its strategy. Now, with aggression in terminology and strategy displayed at the meeting, there is only aggression in implementation that is required. It remains to be seen whether the short-term, medium-term, long-term strategies meet their deadlines.

Your form could not be submitted.
This browser settings will not support to add bookmarks programmatically. Please press Ctrl+D or change settings to bookmark this page.
Topics : #naxals