Is this the oldest Ganesha idol on the planet? 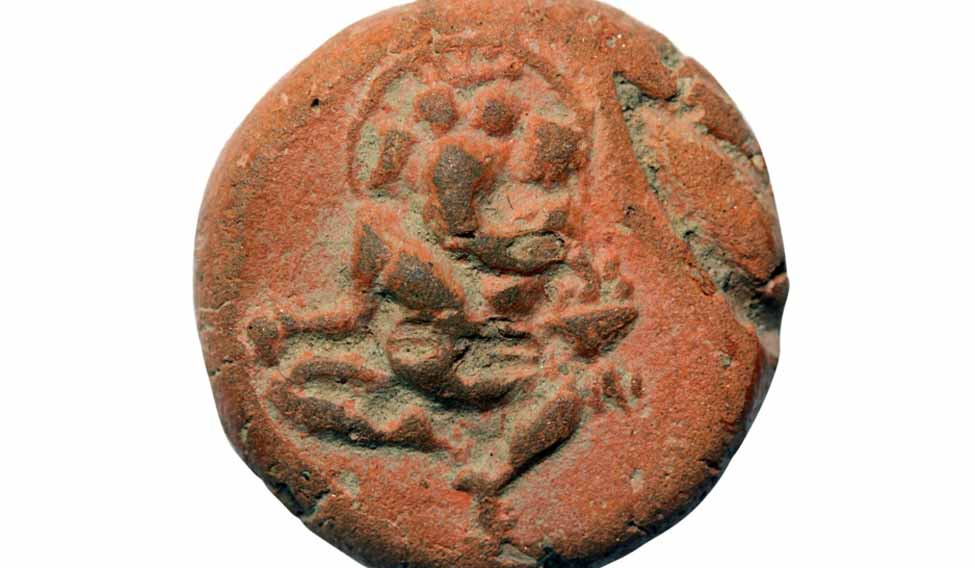 Ever wondered when Lord Ganesha, the cutest of Hindu Gods, was born? When could he have attained divinity?

Historians believe that Ganesha had only two hands in the beginning. He was a creator of obstacles and had to be pacified by offering worship. By the 6th century A.D, Ganesha achieved godly status, signified by four hands and a halo.

Mumbai-based Dr. Prakash Kothari has now come up with stylistic and epigraphic evidences challenging history. The reddish brown terracotta sealing in his collection has a carved two-handed Ganesha with a halo surrounding his head on one side and an image of Nandi and a Brahmi inscription that reads Jagesvara on the other.

"The combination of Ganesha with two hands and a halo around his head hasn't been reported hitherto. The sealing indicates that Ganesha would have attained divine status even before 6th century and that he may not have been Vighna-karta (creator of obstacles) at all," says Kothari, who has a huge collection of rare Ganesha idols, paintings and coins at his home in Marine Drive, Mumbai. "It also discernibly and legitimately leads to a logical conclusion that this sealing represents the earliest evidence of enlightened Ganesha as of today. Devotees would be thrilled to know about this oldest Ganesha on the planet," he adds.

An ardent devotee of Ganesha, Kothari believes that the elephant-headed God with one tusk came to him. "I have a massive collection of bulls. On Fridays, I go to Chor Bazaar looking for bulls to add to my collection. It was on one of those trips that the terracotta sealing with a bull caught my fancy. The tiny sealing that weighed 2.89 grams looked beautiful. After hard bargain, I picked it up," recalls Kothari.

However, neither the antique seller nor Kothari noticed the image of Ganesha engraved on the other side of the sealing. "I found it while having a look at my collection on a Sunday morning," smiles Kothari. Thrilled, he removed his slippers and prayed to Lord Ganesha for some time.

The earliest Ganesha structures or inscriptions discovered so far are believed to belong to the 6th century and later. According to Yuvraj Krishnan, a renowned historian, "the earliest epigraphical reference to Vinayaka dates back to 6th century A.D." Alice Getty, another prominent historian, echoes this thought in her book Ganesa—A Monograph on the Elephant-Faced God. While referring to an image of Ganesha, discovered from China, Getty writes, "It seems incredible that we should find an image of the elephant-faced god in China dated as early as A.D. 531, when in India there is no representation of Ganesa which can be attributed without question to the sixth century." If these historians are to be believed, then how can this sealing in my possession ever have existed, asks Kothari.

How old could be the terracotta sealing in Kothari’s collection? Kothari had the Brahmi script on the sealing deciphered by renowned scholars in ancient history and epigraphy. According to Dr. Shrinivas Ritti, professor, Ancient History and Epigraphy at Karnataka University, Dharwad, it belongs to the 4th—5th century A.D. Dr. T.R. Ravishankar, director-Epigraphy, Archeological Survey of India, Mysore attributes it to the 2nd century A.D. Prashant P. Kulkarni, president of the Indian Coin Society dates it to the 3rd-4th century. Dr. O.P.L. Srinivastava, registering officer-Antiquities and Art Treasures, Department of Culture, Allahabad, UP says it could even be older—he believes it must have been made in the 1st century.

Kothari has challenged history before also. He came up with evidences showing that Valsyayana would have written Kama Sutra between 350 to 375 A.D. Until then, most historians believed that Kamasutra must have been written between 600 B.C to 600 A.D.

Your form could not be submitted.
This browser settings will not support to add bookmarks programmatically. Please press Ctrl+D or change settings to bookmark this page.
Topics : #religion