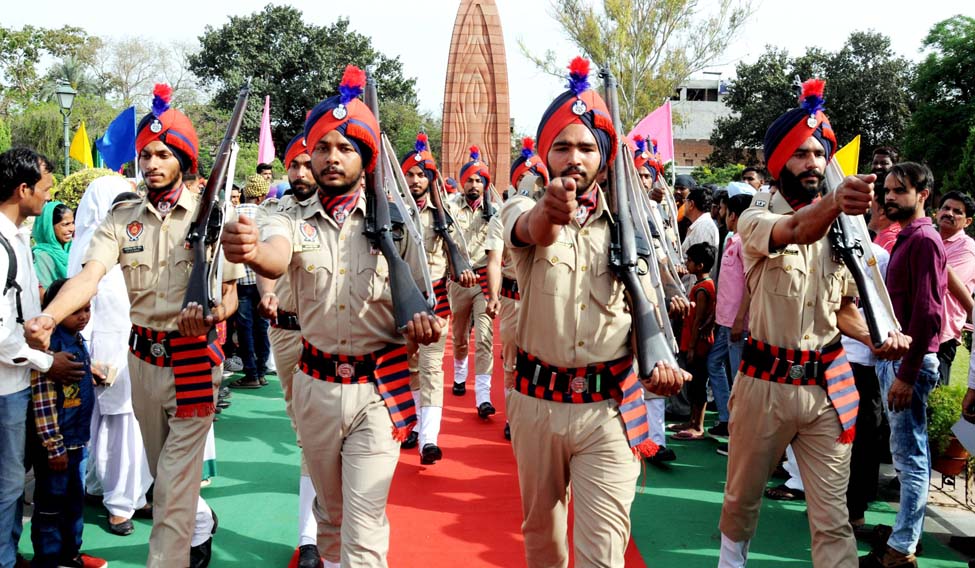 Punjab police personnel pay homage to the martyrs during commemoration of the 98th anniversary of Jallianwala Bagh massacre, in Amritsar on Thursday | PTI

When the brigadier massacred those protesters, the British empire was shooting itself in its foot

On this Baisakhi day, 98 years ago, a cowardly brigadier opened fire on an unarmed crowd of peasants in Amritsar and killed 389. The officer, Reginald Dyer, was court-martialled. His civilian boss, the divisional commissioner of Punjab, Michael O'Dwyer, was later assassinated by Udham Singh. Because of the similarity of the names, many wrongly believed that it was Dyer who was killed by Udham Singh.

That apart, the significance of Jallianwala Bagh largely evaded popular imagination. To most people today, it was another bloody atrocity, the kind one reads about in history lessons.

But Jallianwala Bagh was much more. It was actually the turning point in India's national movement after the revolt of 1857—the first nail driven into a coffin that was being readied for the British empire.

One has to understand the provincial, national and global context in which Jallianwala Bagh massacre happened. The British empire was at its high noon by the turn of the 20th century; the ruthless colonialism that had marked the rise of the British had morphed into what appeared to be enlightened imperialism.

Most of the regions under their domain had been rendered peaceful by clever deployment of military force, along with introduction of enlightened laws and progressive administrative measures. Thus, by the end of the 19th century, British rule, in India as well as across the globe, had gained a certain legitimacy even in the eyes of the enslaved public.

The colonial wars had ended. There was a semblance of progressive administration. The people were seeing less of the British soldier, and more of the British civil servant.

This was true of Punjab more than anywhere else. The Sikh empire that the illustrious Ranjit Singh had built was dismantled in the two bloody Anglo-Sikh wars in the first half of the 19th century. But Dalhousie, the imperious governor-general, understood the value and valour of the Sikhs. “I shall send you the best men,”he told the natives of Punjab. And he did.

He sent men like Sir John Lawrence who again said, “I shall rule you with the pen and the sword.”

With the sword, he ended the banditry in the countryside and established the rule of law. With the pen, he rewrote their laws and gave the people a progressive administration. With his administrative acumen, he built canals to irrigate their lands.

Punjab reciprocated. For close to seven decades from the 1840s, the otherwise rebellious Punjabis stayed loyal to the paramount power in India. This was perhaps a first in the history of the Punjab, whose sons had fought even the mighty Mughals.

The British employed the same technique that they used in Punjab in the rest of India. Just like Sikh power was crushed in the two Anglo-Sikh wars, the revolt of 1857 was suppressed with sheer force and ruthlessness. But, as in Punjab, the British soon realised that they couldn't rule India with the use of sheer force. The ruler had to gain legitimacy in the eyes of the subjects. It was now that the British began to focus on improving the administration of the empire, rather than conquering territories.

To gain symbolic legitimacy, they even conducted two oriental-style durbars in the old Mughal city of Delhi rather than in their seat of power, which was Calcutta. The defeat in Mesopotamia in early stages of the first world war was a setback, but the British salvaged their prestige by finally winning the war in Europe.

It was in this background, and in the year that the first world war ended, that Jallianwala Bagh happened. Till then, most Indians had reconciled with the progressive nature of the colonial rule. Even the national movement was essentially an attempt to seek greater say for Indians in the administration, rather than seeking dominion status, let alone independence.

British rule was largely viewed as just, humane and progressive. If there were flaws, those could be addressed through discussions, petitions and also by creating better awareness all around.

Jallianwala Bagh shattered the faith that the people had in the British sense of justice and fairness. To most native Indians, the massacre of the unarmed was a betrayal of the trust that they had placed on the British to rule them wisely, justly and with fairness. In the eyes of the average Indian, the just, fair and liberal Englishman suddenly turned into a ruthless, bloodthirsty tyrant who couldn't be trusted. Jallianwala Bagh revealed the evil that resided in the 'enlightened' empire.

Since then, it was a slow but sure downward slide for British rule in India. It was on this sense of betrayal that Gandhi built his mass movement, which put a premium on breaking the laws made by the rulers. As the people began to wilfully break the laws made by the state, the state itself became illegitimate.

Yes, when that bloodthirsty brigadier shot dead those protesters, the British empire was shooting itself in its foot. Those shots led to their ultimate collapse.