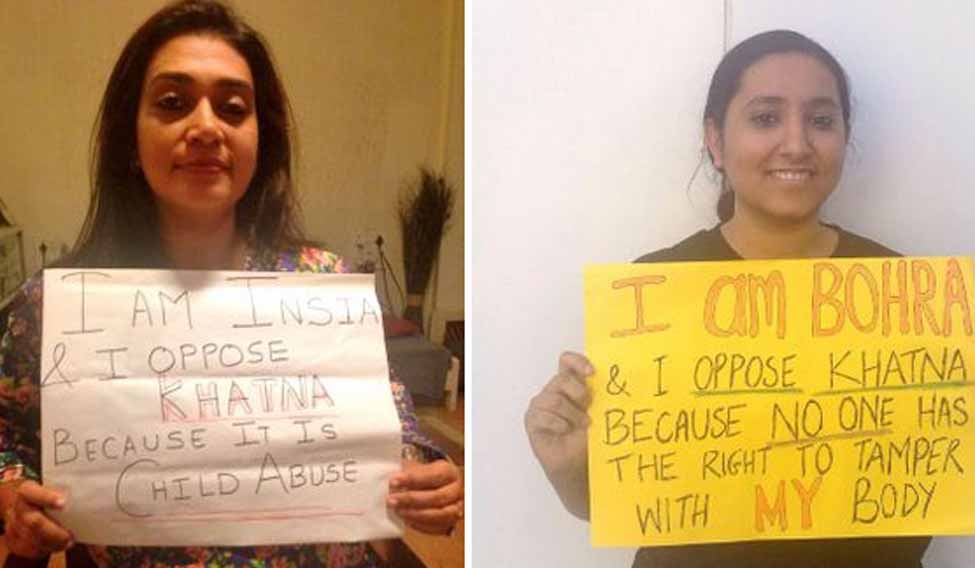 Photos from "I am a Bohra” campaign by Sahiyo

Only nine per cent of Dawoodi Bohras—members of a small Muslim sect in India—are okay with the continuing practice of khatna on their daughters according to an online survey conducted by Sahiyo. The survey conducted on 385 women from all over the world shows that there has been an increasing opposition to the practice within the community in recent times.

Female Genital Mutilation (FGM) is the practice of partially or wholly removing the external genitalia of women for non-medical reasons. The Dawoodi Bohra community follows a long-standing tradition of circumcising girls—khatna—between the ages of six and nine years. The World Health Organization has categorised this practice as type 1 Female Genital Cutting (FGC).

The exact origins of the practice are not known, but it is widely believed that FGM originated in east Africa and predates the beginning of Christianity. Considered to be a rite of passage, it is shrouded in secrecy and carried out in a household setting usually with the consent of the mother or other female family members.

The physical consequences of FGC include infections, excessive bleeding and burning sensation during urination. It also results in mental trauma and affects the sexual health of the survivor who may develop an aversion to sex or physical intimacy. The practice has been considered as human rights violation by WHO, UNFPA and UNICEF.

The survey was conducted by Sahiyo, a group of five women who have been working to end the practice in the community.

“It is a first-of-its-kind organisation and a platform to talk about the issues related to khatna which has always been practiced in secrecy, sometimes even without letting the men know,” says Insia Dariwala, co-founder of Sahiyo and who is making a feature film on the subject. She says the survey was conducted in order to understand how the community feels about the practice.

The findings of the survey reveal that many women in the community do not want khatna to continue. Mariya Taher, co-founder of Sahiyo, who has been working on a legislation to criminalise FGC said, “There is pluralistic ignorance related to practice and even though many members oppose the action, they do not speak up thinking they are the minority.”

Mariya said, until recently women in her family had never discussed about khatna amongst themselves.

Sahiyo conducts several activities to create a platform for dialogue on the issue. Recently, it conducted an online “I am a Bohra” photo campaign where women members of the community spoke out against the harmful traditional practice. The group also received, ‘Daughter of Maharashtra’ award by Nari Samta Manch, Pune, in July this year.

Your form could not be submitted.
This browser settings will not support to add bookmarks programmatically. Please press Ctrl+D or change settings to bookmark this page.
Topics : #religion | #women