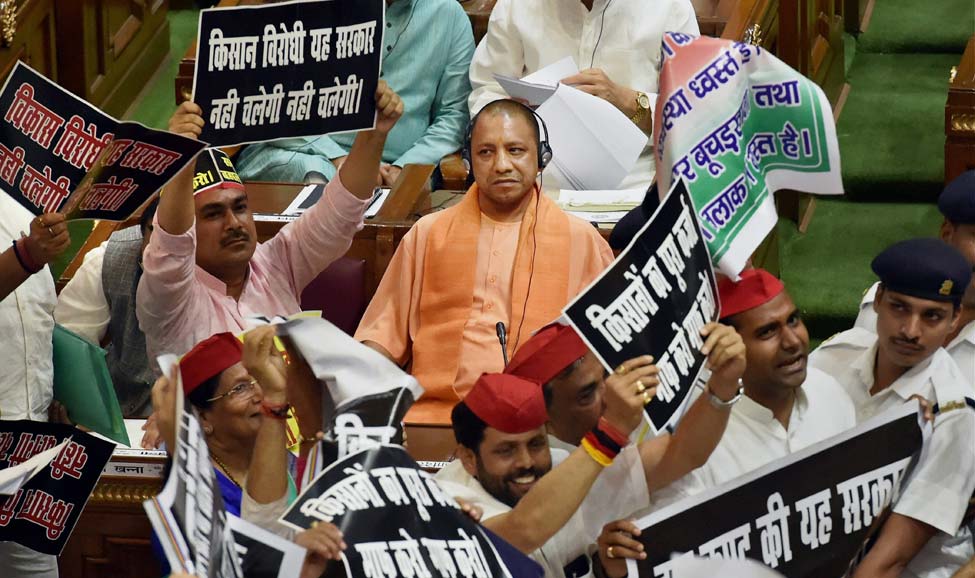 A double murder and an attempt to loot a jewellery shop in Mathura (May 15), which is the constituency of cabinet minister Shrikant Sharma, the killing of the father of an IPS officer in Ghaziabad (May 11), the attack on Muslims in a village in Sambhal district (May 11) indicate that the Yogi Adityanath government’s claim to establish better law and order in the state is crumbling.

Ever since Adityanath took charge as Chief Minister of the state, law and order has been his priority. Soon after assuming charge, he said, “gunde or badmaash ya to jail jaye ya UP chhod de”(Goons and criminals can either go to jail or leave UP).

However, the past two months saw a hike in the crime graph. The murder of two goldsmiths Megh Agrawal and Vikas Agrawal, and loot of Rs 4 crore worth jewellery and cash from their shop in Mathura caused severe embarrassment for Adityanath. The incident happened during the ongoing Assembly session which gave opposition enough ammunition to attack the government. To save his face, Adityanath sent his cabinet minister Shrikant Sharma and the DGP of the state to assuage the family members of the deceased, and immediately transferred 67 police officers in UP. The first Assembly session of the Yogi government saw a huge ruckus by the opposition leaders, who protested the poor law and order situation in the state.

In another incident, Ishwar Tyagi, father of Sanjiv Tyagi, an IPS official, was found shot dead at his residence in Ghaziabad about a week ago. The cops are still investigating the matter. The recent death of the IAS officer under mysterious circumstances in the heart of Lucknow too jolts Yogi's claims.

On April 24, a middle-aged couple was brutally killed along with their two daughters inside their house in a remote area in Allahabad. According to Munna Lal, Additional Superintendent of Police, Allahabad, Makkhan Lal, his wife and two daughters, aged 22 and 17, were killed by goons who slit open their throats.

Apart from these gruesome murders, a number of rape cases have been reported from various parts of the state. In Auraiya district in western UP, a 13-year-old Dalit student was raped. On May 13, a newly-married woman was gang-raped in Kaushambi district in eastern UP, after miscreants looted her house.

According to official figures, 393 rape cases were reported from different parts of UP in April alone, which comes to an average figure of 12 rape cases a day.

While the opposition has been attacking Adityanath for UP's deteriorating law and order situation, he has asked a year's time to improve the situation.

“Everyone knows who all are involved in such crimes. No crime would be allowed under political patronage,” said Adityanath.

Sanjay Bajpai, the Congress spokesperson said, “After the BJP assumed power in the state, law and order situation has reached its nadir. The killings in Allahabad and the double murder in Mathura are burning examples of this. Rapes have gone up and goons are striking at their will. It seems that criminals are running a parallel government in the state.”

Rajendra Chaudhary, the Samajwadi Party leader, attacked the Yogi government and said, “This government is a total failure on the law and order front. All its tall claims to improve the situation in the state have proved totally hollow.”

Your form could not be submitted.
This browser settings will not support to add bookmarks programmatically. Please press Ctrl+D or change settings to bookmark this page.
Topics : #Uttar Pradesh | #Yogi Adityanath | #crime