Swara Bhasker: Despite her aristocratic birth, Dr Rani Ray was a revolutionary in spirit

Rani di, as my mother called her, smelled of cigarettes and perfume. My mother’s teacher from her master’s at Delhi University in the late 1970s, Dr Rani Ray was a striking personality. A petite frame, a stylish top knot, sleeveless blouses with beautiful cotton and silk saris, bright eyes behind oversized spectacles, rosy cheeks on high cheekbones, often dangling a cigarette in elegant long fingers and an accent that reflected her western education and Bengali roots, Rani di was hard to miss in a room full of people. I always saw her through my mother’s eyes, and as a child, loved her, simply because my mother did.

Born into a pre-independence aristocratic family in 1929, Rani di was the daughter of Kumar Saheb Birendra Kishore Roychowdhury, the zamindar of the erstwhile estate of Gouripur in Mymensing (now in Bangladesh). You would not know that from her though; Rani di was strikingly quiet about herself. But she spoke a lot to a few favourite students, among them my mother. And, soon enough, through my mother’s stories about Rani di’s life choices, I came to admire her deeply for the person she was. 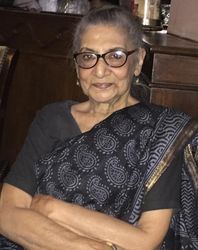 Rani di was married at an early age to a suitable groom from a respectable family, but when she found her husband to be incompatible, she separated from him without any fuss and focused on her education. She completed her intermediate arts, bachelor’s and master’s degrees and started working in a local college. As a single mother she took her daughter with her to England when she went to study for her master’s. Later, she went on to do her PhD at Santa Barbara in the US.

Always politically aware and active, she participated enthusiastically in the protests against the Vietnam war that swept university campuses on the west coast in the late 1960s. Despite her aristocratic birth, Rani di was a revolutionary in spirit and became a member of the CPI. Though she surrendered her membership, Rani di remained a committed leftist with an abiding belief in working class struggle.

To her students, Rani di was an inspiration. “To me she represented the possibility of an alternative kind of life for women. A life beyond the home and the family; a life of the mind, of intellectual pursuit. A life where women could have their own identity, an identity because of their work,” said my mother. She saw a mentor in Rani di: an elder, wiser person from a similar context as her family—but someone who had freed herself from the shackles of her context. My mother was a studious child and found the restrictive atmosphere of the family in Patna, and the future it offered the girl children of the family, “suffocating”.

When my mother graduated and began teaching, Rani di, too, graduated into a family friend and became Rani masi for my brother and me. She was present at all our birthdays, weddings in the family, parties and in mourning, too.

She always looked the same. I never knew if she was 62, 72, or 82; she was always a little frail, but walked absolutely upright—always perfectly cogent and full of conversation about books, films and politics. She continued to work to her very last years, turning into a prolific translator after her retirement from a Polish University. When she was finally diagnosed with cancer some years ago, I realised that Rani masi was nearing 90. Since her own daughter had died a decade ago, Shankar bhaiyya, her house-caretaker of many decades, became her primary caregiver. She made sure she left him substantial funds as her health began to deteriorate.

My mother spent many weeks looking after Rani masi, during her frequent hospitalisations. When she died on November 6, my mother clutched the paper on which Rani masi wrote notes from her ICU bed in the neat handwriting of a literature professor: “Tell the doctor I will buy him a drink when I get out of here.”

At her cremation I watched numerous students (most in their sixties) showing up with ready hands to chip in toward the cremation of this independent woman whose identity was beyond that of her family—who had inspired them beyond classes. And I realised a guru truly lives in her students.