Gram and the generation gone by

Social media has become the single-most defining development of the last decade, one that has not just influenced but changed human interaction, behaviour patterns and social relationships in fundamental ways. It has filled our lives in ways we could never have imagined a decade ago—our lives are not just shared, they are displayed and consumed. We click photos of the meal we order and hashtag it #FoodPorn before taking a bite. We pose for selfies as if we are automatons. And no moment seems lived unless it hasn’t been captured and posted on Instagram. In some ways, we are constantly performing the act of living our daily lives. Unwittingly, we are living two lives—one, the boring day-to-day life that we breathe and trudge along in; the other, a curated, saturated, IG-filtered life on display.

The younger generation has taken to it with aplomb and are its primary drivers/consumers. But the older generation, too, has interesting responses to it, as I discovered in the case of my father.

A retired Indian Navy officer in his late sixties, Dad discovered Instagram a few months ago when I opened an account for him. Initially he fumbled with the ‘like’ and ‘comment’ buttons, but soon learnt how to ‘follow’ people, to view stories and put up his own stories and posts. His favourite part though was writing captions—always wry, quirky and finding something profound in the mundane. I think he would first think of the caption and then capture the video/picture. Soon his pages were flooded with scenes from our garden, and after I arrived from Mumbai with my pets, of dog, cats and the sensitive canine-feline politics of the house. 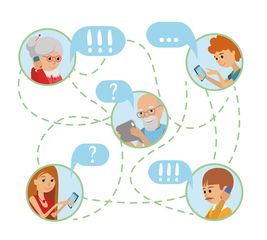 Much to my amusement and occasional embarrassment, Dad decided to become the chronicler of the ordinary and celebrate ‘regular’ people and their lives—from the local barber, the vegetable vendor lady and the gardener to unsuspecting delivery boys and security guards of our colony. My friends started following Dad’s handle and soon he was having independent conversations with them in the comments section. Many of them would message me separately and tell me how oddly comforting his wry observations were—a reminder of the decent, non-abrasive humour and wisdom of a time gone by. Occasionally, he would direct the gentle sarcasm my way, prompting gleeful comments from our mutual followers—“Beti ser toh baap sawa ser (The father is even ahead of the daughter)”; “The real star in the family!”It seemed my dad and his Instagram handle were in a honeymoon phase.

Then one day he came up to me a tad disturbed. “Swara, these videos of scantily dressed women dancing keep showing up on my feed.”

I looked. “Dad, someone you follow may have posted them.”

I did it for him. A few hours later, he came back.

“Some gentleman has sent me a message.”

It was the person he had unfollowed—“Why u unfollow me sirrrrr??” followed by sad smileys.

“Ignore him, Dad.” My dad complied, but looked hassled.

Over the next few days, my dad struggled with targeted content and ads and the tasteless humour that Instagram’s algorithm threw his way. His constant question was, “How do I unsee this?” A metaphoric question for our time.

The final straw in my father’s deteriorating relationship with Instagram came the day a relative posted a (very flattering, actually) sun-kissed picture of herself on a beach in a two-piece swimsuit. My father, embarrassed and uncomfortable but also not wanting to show it, took a decision. He came to me one morning and announced, “I have deleted Instagram.”

“I think it’s not appropriate for my age group. I think it’s a platform for young people. It’s better the young see what the young post.”

“But what about your followers, Dad? They look forward to your posts.”

My dad returned to his study, contemplative, and then came back with a fresh cat video. “Why don’t you post this from your handle with this caption?”

Clearly the persuasive charm of social media continues, even for a decent, reticent, gentlemanly military man of a generation gone by.