Tale of a quiet commitment

My parents had a ‘mixed love marriage’. My father is a Telugu-speaking Andhraiite and my mother a Hindi-speaking Uttar Pradesh/Bihar product. They met and made a life together in Delhi. Born into modest, but comfortable backgrounds, privileged by education and caste identity with social and cultural capital, yet idealistic and progressive; eager to learn and grow as individuals, enthusiastic to adopt the technologies and tools of the modern world; but traditional in their personal values; and yet open-minded in their outlook; I guess my parents represented the post-colonial, post-Nehruvian young, professional, urban Indian citizen.

Their (pre-marriage) love story had the distinctive flavour of a Farooque Shaikh-Deepti Naval film from the early 80s. The reticence, the unsaid understanding, the long walks, the letter writing, the lack of fanfare and display and the refusal to give their relationship a name until they were married—just a quiet commitment.

As a 90s’ teenager, who was learning all about romance and dating from cable TV that aired American TV shows, I often quizzed my parents about their pre-marriage relationship, and always had the same answer—“We were just good friends.”

“So you just decided one day to marry your friend? Isn’t that weird? Like tomorrow if I just decided to marry Rafi?” I would tease my mother.

“Oh ho! Your generation doesn’t understand these things,” my mother would brush me off.

Without my realising my parents’ quiet commitment to each other became the most central influence in my life. Their marriage silently provided the most positive role model for the love, companionship and commitment my brother and I would look for in our lives. 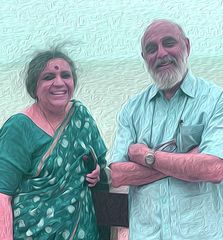 My mother had a full-fledged career from the time we were born. They were equal partners when it came to parenting. My mother never sought permission from my father for anything—rather she discussed issues with him and they took mutual decisions. He applauded her every achievement and enabled all her career goals, even becoming a single parent for a few years when she went alone to New York to pursue a Ph.D leaving her two children in the care of her husband.

When my mother got a full scholarship to pursue the Ph.D. at New York University, we celebrated as a family, and our father took us to the airport to bid her farewell. We wrote letters to my mother, mine full of school gossip and complaints about my brother. We recorded tapes of our voices talking to her. Our father would use up the whole of side A for himself and side B was divided between my brother, me and, Chandra, our cook. My mother would listen to these tapes on her Walkman repeatedly as she travelled on the New York subway; smilingly sometimes, and sometimes in tears.

At the time, I didn’t realise how radical and unusual it was for an Indian middle class family to have the husband look after the children, while the wife pursued a career goal. It was only when I struggled with adult romantic relationships, that I came to appreciate how wonderfully unusual and enabling my parents’ relationship was. It seemed inexplicable to me that they had made a long distance relationship work and without any fanfare or proclamations of great heartache or great love. Just that quiet commitment.

When I was in my twenties and emboldened to be more honest in my questions, I’d ask my parents:

“You guys were away from each other for three years and never felt like having an affair?”

“What nonsense! Of course we didn’t.”

“We just didn’t. Because we loved each other.”

“Did you repress yourself?”

And, perhaps, that commitment, which eludes my generation, is what has seen this couple through four decades, as they celebrate 40 years of a journey of togetherness on July 9.

Happy anniversary, Ma and Dad. Watching you both has been my greatest life lesson.