Songs about the dark times

Two weeks ago, some friends and I were discussing how public debates and conversations in India are so fractious and polarised. The last six years have seen Indians fighting among one another on every topic. We have trolled each other, called each other names on social media and attacked each other on the streets. In some gruesome moments, we have beaten one another to death, and burnt people alive.

As an antidote, almost, this group of friends came up with the idea of a campaign, ‘India, My Valentine’. Envisaged as a series of performances across different cities, the campaign would create a space where we could unite as audience appreciating art, notwithstanding the nitty-gritty of our political differences. We thought we would use the Valentine’s Day as a peg, and celebrate India, our homeland, our birth place, our family, our love. 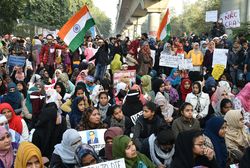 A core team was formed, a social media campaign was launched. We called out to performers, artists and organisations to collaborate. In two days, numerous queries started pouring in. I came across a whole host of young performers, some in their 20’s, some still finishing their undergraduate courses. “Send me your work links,” I asked, and received a series of YouTube links of these young people performing at various protests. I began to watch and listen. The expression, the fire, the angst, the moral clarity, the ethical commitment, the biting wit and, yes, the craft filled me with a happy awe.

I admired the cadence of Sabika Abbas Naqvi and Nabiya Khan’s feminism. Sabika has reclaimed the sari, the kajal and other traditional items of the feminine wardrobe and has turned them into statements of independence. Nabiya’s “aayega inquilab pehenke bindi, chooriyaan, burqa, hijab [Revolution comes wearing bindi, bangles, burqa and hijab],” is an impressive assertion of a young Indian girl, breaking so many stereotypes.

I applauded Kaushik Raj’s rhythmic and powerful ode to the Constitution, Samvidhaan. Naveen Chourey’s fiery Main Sarhad Pe Khada Hoon is a eulogy to the Indian soldier in traditional veer ras [heroic style of writing poems], and is a critique of hate politics. I sang along to Poojan Sahil’s parody songs and renditions of popular numbers adapted to contemporary contexts; and the soulful Zalim Humein Aazmana (written by Aseem Sundan), which is almost a response to the shootings at Jamia students. I swayed to Madara’s no-holds-barred rap, Siraj-Ud-Daulah and Tukde Tukde Gang; he is calling out the hypocrisy of all those in power ending with a straight up “Keechad mein kamal nahi, kamal hi keechad hai [The lotus is not in the slush, the lotus is slush].”

Sumit Roy’s Poorna Swaraj’s accented lyricism is not stopping him from recognising the illusion of our freedom of expression in an increasingly authoritarian context.

Pankaj Bhatt’s fiery Jai Shri Ram is calling us all out for our complicity in the normalisation of hate. Kafeel Jafri’s mellifluous Dastangoi—tales that remind us of our shared syncretic traditions—is a soothing reminder of our intertwined history, of our fraternity in times of shrill hate. I have watched the intense Aamir Aziz enthral an audience in South Mumbai with his simmering renditions that express the pain of victims of discrimination and violence. Aziz’s poetry is becoming the voice of the marginalised and the “marked out” (in his own words) everywhere—“Main German Yahoodi, Main Hindustani Musalman hoon [I am the German Jew, I am the Indian Muslim].” His Sab Yaad Rakha Jaaegaa is a testimony to the hope and conviction of the powerless that history will remember and see the injustice carried out by those in power.

As I soaked in the hope, hearing the passion of these young voices, I realised that German theatre practitioner Bertolt Brecht was right when he wrote: “In the dark times will there also be singing? Yes, there will be singing about the dark times.”