India has always been a very exciting place. But nowadays, actions and occurrences here have taken on a whole new level of manic speed.

The country is coloured with protests against the discriminatory Citizenship (Amendment) Act and the bureaucratic disaster that the National Register of Indian Citizens promises to be. The protests have largely been peaceful; stray incidents of violence have been attributed to vandals planted by the right-wing machinery.

More than one fake sting operation by the ‘Godi Media’ and the BJP’s IT cell have failed. At the time of writing this, the latest such bizarre sting was by the well-known troll and occasional TV commentator Gunja Kapoor. She was caught roaming Shaheen Bagh in a burqa, filming protesters in an attempt to expose God only knows what. 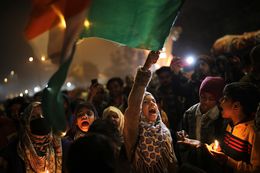 Public discourse has become so shrill, polarised and noisy that it is nearly impossible to follow the minutiae of strange developments and conspiracy theories. The establishment and the police have been accused of being high-handed; and in more than one case, they have acted in contravention of constitutional principles.

Yet, the protests have not ebbed. If anything, they have become more creative. A fine performance of protest came from the popular standup comedian Kunal Kamra, who encountered the well-known TV anchor and rabble-rouser Arnab Goswami on a flight and recorded a video of himself doing an ‘Arnab on Arnab’. Kamra’s series of piercing questions was ignored, but it is noteworthy that he did not make physical contact with Arnab, nor was he directly abusive, even though he used two swear words. Kamra ended the video with an emotional appeal—he asked Arnab to read Rohith Vemula’s suicide note. “Or just become human, you nationalist!” he said. The video posted by Kamra went viral on social media in no time.

Amazingly, Kamra’s stunt was greeted with unusual severity by Indigo Airlines. Flouting all rules and procedure, the airline banned the comedian for six months. Indigo’s Twitter announcement tagged no less than Civil Aviation Minister Hardeep Singh Puri, who tweeted asking other airlines to follow suit. Air India, GoAir and SpiceJet promptly barred Kamra from their flights. It seemed fairly clear that the government was playing a game of vendetta to avenge the moments of embarrassment its favourite mouthpiece had to endure.

A series of unexpected events then took place. The Indigo pilot who had captained that flight wrote to the airline, asking why procedure was not followed while announcing the ban. The pilot said Kamra’s behaviour was “not worthy of a travel ban”. A woman shared on social media a picture of herself boarding an Indigo flight, with a placard around her neck saying ‘I support Kunal Kamra’. Two other flyers wrote to Air India and GoAir, calling them out for their cowardice, and stuck notes on their flight seats. The hashtag #ISupportKunalKamra began trending as fans abroad began sticking bills that read ‘Reserved for Kunal Kamra’ in public parking spots for bicycles and two-wheelers. Meme-makers made hay for a week, comedians made spoofs of Kamra’s original video, and Kamra himself got a standing ovation at a comedy show in which he showed up as a surprise guest. Back in Shaheen Bagh, women protesters shielded Gunja Kapoor from an angry crowd, and made sure she was safely handed over to the police.

How small the government and its law enforcement agencies seem in the face of India’s citizen protesters! The state seems petty, cruel, high-handed and irresponsible. In contrast, the citizen protesters remain stoic, calm and committed to nonviolence, showing empathy to opponents who are deceitful and provocative.

We may be living in a time that will be remembered in history for its power and moral strength, as epitomised by the simple image of a girl offering a rose to a policeman in riot gear.