When JNU was saved—not by cops

On January 5, I had packed up early from a shoot in Mumbai. I was looking forward to an early dinner and planned to be in bed by 8:30pm as I had to be back on set at 5:30 the next morning. Habitually, I checked my Twitter and found the timeline littered with tweets by JNU students about an armed attack on campus. I was bewildered. I saw some messages on WhatsApp, too. There was a two-minute video. As it began playing, I, a former student, recognised the location—it looked like the entrance of the girls’ wing of one of the older hostels in JNU. A few female voices were yelling in the video. Then, two figures emerged. Clad in jeans and shirts and with their faces covered, a boy and a girl stood armed with blunt weapons and anonymity. They moved out of frame and, from the depths of darkness, scores of masked boys emerged. As the video began to register shrieks of girls and the sound of glass breaking, the screen went blank. I sat back stunned. This was a campus I have known and cherished deeply. Despite the nonstop vilification by ‘Godi media’ and the BJP IT cell in the last three years, JNU has always meant home, family and safety to me. It took some moments to realise that safety had dissolved. Then with a sickening blow it struck me—where were my parents?

My father said he was home. I called my mother. She was stuck in the car at a barricade, erected by a group of students warning others about the ongoing violence 400m away. I told her to drive out of the campus. Instead, she walked to the north/main gate of JNU. I texted some students I knew on campus—they asked for people to reach the north gate where the Delhi Police was waiting patiently, letting the masked goons run havoc within the campus and thrash people. Where was the vice chancellor and JNU’s private security? Conveniently missing! Despite complaints and video evidence of the violence, the police refused to enter the campus without “court orders”. Apparently, a right-wing mob was with the police, chanting, “Desh ke gaddaron ko, goli maaron saalon ko (shoot those who betrayed the nation)” and “Leftiston ki qabr khudegi, Savarkar ki dharti pe (the graves of leftists will be dug on Savarkar’s land)”. 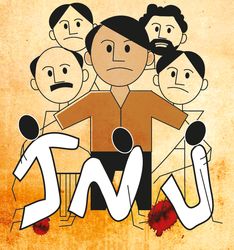 In a state of utter panic, I made a video, asking citizens of Delhi to gather in large numbers outside the JNU gates to pressure the police to act. I spoke of my parents, and broke down without intending to. I shared it on social media. Electronic media picked it up. The media was outside campus by then. Soon enough, a thousand people arrived at the gate. They began chanting pro-JNU slogans. It was national news. I imagine it must have set phones ringing in the power corridors of Delhi. Eventually, the police (presumably on orders from the relevant person in the home ministry) entered the campus and did a flag march. The ravaging mob, meanwhile, dispersed and hid in the bushes of the sprawling campus. At the main gate, the police also coaxed the mob of about 80 ‘goli maaron’ enthusiasts to go home. They dispersed, sullenly dragging their lathis, but not before attacking an ambulance carrying injured students and roughing up a few journalists. The police watched on, even escorting them away. The pro-JNU protesters began sloganeering outside the gate; inside, teachers and students joined in. Eventually, students forced open the gates, and the citizens trooped in, feeling victorious. The dark night was over. Or, was it just beginning? Would the vandals return? Or, were they quietly among us already? A certain feeling of assurance had departed from the campus forever.

My mother got home at 2am. JNU had been saved—not by the law enforcement agencies, but by the citizens of Delhi and by the media. JNU had been saved by the internet. Suddenly, it made sense why India has had the most number of internet shutdowns in recent times. Information is awakening the citizen’s conscience. The question is: why does it not have the same effect on the government?