The mob monster within you

Joseph Conrad’s Heart Of Darkness has the mysterious Kurtz exclaiming, “The horror, the horror!” as he dies. The now canonised lines were widely interpreted as being a critique of colonialism and the cruelty inflicted upon native Africans by their white European colonisers. Today, those lines aptly describe the news we hear and read on a daily basis in India. In the last two weeks, India has seen a series of barbaric crimes against women. The response of the Indian public, social media and the law enforcement agencies have been no less chilling.

In one gut-wrenching incident, horrifyingly similar to the Nirbhaya gang-rape case of 2012, the charred body of a vet was found in Hyderabad. CCTV footage suggested that four men had deliberately punctured the tyre of the woman’s scooty to gang-rape her. The accused were arrested. Sanghi social media saw an opportunity in the fact that one of the accused was a Muslim, and began to trend #MohammadBalatkariNikla. A few days later, the Telangana Police, led by Vishwanath Channappa Sajjanar, shot dead all four of them in the wee hours in an encounter killing. Largely speaking, the Telangana Police was applauded for bringing ‘justice’ to the victim. 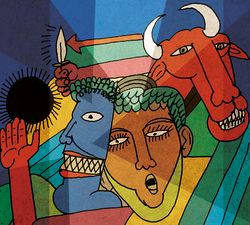 The euphoria around this on-the-spot justice is telling of the growing legitimisation of the mob and the normalisation of violence that is prevalent in the Indian public’s mindset. Our democracy has truly turned into a frothing-at-the-mouth mobocracy. The idea that the accused deserve at least one chance to defend themselves before sentencing is perhaps the most basic concept of justice. Historically, the idea of rule of law made justice available to all members within the law’s jurisdiction, and it is a key characteristic of being ‘civilised’. The rule of the mob is arbitrary, reckless and without discretion. The mob may at one moment administer a satisfying sentence to a rape accused, in another it may choose to disrobe and publicly parade a woman who is considered ‘sinful’. The mob may, in a different coloured lens, lynch to death a person for their style of cap, beard or choice of luncheon meat; or it may choose to shoot at sight people labelled ‘anti national’, ‘urban naxal’ or ‘tukre tukre gang’ by some blue tick-verified idiots on Twitter. The mob is not loyal to any principle. That is why we have the law—based, as it ought to be, on humanitarian and ethical principles. That is why we have institutions like the judiciary—to ensure that the rule of law is carried out in a just and equitable manner. The mob undermines the law and every institution that protects and preserves the rule of law. The mob has no principle. The mob acts on whim. The mob cannot and must not be trusted.

India’s own freedom struggle saw a constant effort to keep mob mentality at bay. Gandhi’s concepts of satyagraha and ahimsa were the two mahouts keeping the elephant of nationalist sentiment in check, and preventing patriotic emotion from turning into mob hysteria. Gandhi’s opposition to the idea of mob-administered justice was so great, that he called off (in the face of grave criticism) the raging and successful Non-Cooperation Movement after nationalist protesters burnt a police station in Chauri-Chaura as an act of revenge for police firing on an unarmed crowd.

The mob has acted with tremendous violence and destruction in India—during Partition, in the 1984 anti-Sikh riots, in the 1992 demolition of the Babri Masjid, in the 2002 Gujarat riots, in the numerous lynchings in the last five years, in every gang-rape and act of collective violence. I am not suggesting that those accused of rape be let off the hook. They must be tried and sentenced, if found guilty—but not by the mob. Justice must be administered by institutions that will be accountable to the law. And, let us reflect on our own ‘thirst for justice’: is it the mob monster lurking within us? Every shred of humanity and civilisation that remains in our collective conscience must be echoing Conrad’s words—“The horror, the horror!”