We live in a time when our traditional festivals have all turned into mega-shopping fests, whatever be the religion. In India, perhaps Diwali is the most consumable, marketable and advertise-able of festivals. And it is great! As an avid shopper, I love the Diwali season. I wait to indulge in splurging (and eating) that I would not allow myself for the rest of the year, with the happy guilt-free shrug, “It’s Diwali yaar!”

For us in Bollywood, it is also the season of the iconic Bollywood parties. The superstars host Diwali celebrations and the entire industry attends, furnishing the entertainment pages and websites with pictures and gossip for the whole week. 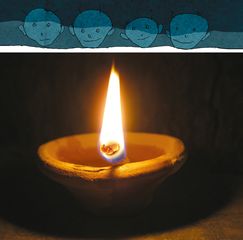 But, perhaps, amidst all the extravagance, it would do well to remember why we celebrate Diwali. While historical references to the festival date back to Puranic literature, in the public imagination of most Indians, we celebrate it because it was the day righteous Lord Ram returned to his kingdom, Ayodhya, wife and brother in tow, after defeating the powerful but arrogant Ravan.

In some parts of India, Diwali is celebrated to mark the day that the demon Narakasura was slain by Lord Krishna. There are other legends relating to the Sikh and Jain communities as well, but significantly all the stories related to Diwali allude to a simple, universal lesson—no matter what the obstacle, ultimately good triumphs over evil.

This Diwali, this basic belief kept coming back to me. The news cycle this past year has given us so many reasons to feel disillusioned and to question this tenet. Every day, newspapers and television channels scream of the powerful going scot free, and victims suffering.

Kuldeep Sengar, rape accused MLA from Uttar Pradesh, is attending public functions while the victim, who has lost almost her entire family in a series of bizarre deaths, is languishing in the ICU; Chinmayanand has escaped being charged with rape (despite evidence), while the girl who raised her voice has been arrested and charged with extortion; the bishop in the Kerala nun rape case is out of prison, while the nuns who supported the victim have been expelled from their establishments. The Mehul Choksis and Nirav Modis of India are well settled abroad, while PMC account holders have no answers as to when they are likely to have access to their savings again. Kashmiri citizens continue to live in what seems now to be an open jail, while in other parts of the country, penury and hunger-related suicides are on the rise.

Our democracy has turned into a raucous cattle fair, as our elected representatives pay little or no heed to the voters’ verdict while they auction themselves to the highest bidder. We have a terror accused sitting in Parliament; every major institution is whistling the tune of the powers that be, lacking any ethical spine of their own; and one cannot differentiate between the electronic news and a tacky B-grade crime thriller anymore.

And so, this Diwali, as I chose what sari to pair with which blouse, I wondered about the hollowness of celebration in such dismal times.

My mother finished the Lakshmi puja at home and we came down to begin lighting the lamps. My mother lit the first lamp, and a tiny flame came to life casting a warm yellow light into the midnight hues of the amaavas evening. It struck me then that no matter how vacantly extravagant the celebration, we must never forget that, at its core, Diwali, and all such festivals, are moments for us as a society to rekindle our hope and our belief in truth and righteousness. And I smiled as I lit the next lamp, because another simple truth came home to me—that even the darkest night is dispelled by the lighting of a single lamp.