Mahatma Gandhi has been described in many ways during his lifetime and since his demise, and that includes the title of “The greatest Indian ever” given by more than one commentator. Interestingly, he has an equal number of detractors as well. Love him or hate him, the fact remains that Mahatma Gandhi is undeniable—as a person, as a force and as an ideal.

This was a man who made the idea of Swaraj accessible to even the poorest and most illiterate Indian. He snatched the whole discussion of freedom away from the stiff collars and stuffy pipes of the British-returned lawyers that led the Congress, and placed it in the barren fields of India’s toiling masses. With one pinch of salt, one bonfire of British goods and one simple idea—non-violent non-cooperation—he made the struggle for India’s freedom everybody’s struggle. And, with an unwavering firmness toward the ideal of ahimsa, he called off the raging non-cooperation movement the moment it turned into a rage fest—when a police station in Chauri Chaura was burnt down. India was reminded of Gandhi’s importance, value and the potency of his persona precisely once the national movement achieved its goal of freedom. Gandhi spent August 15, 1947, and subsequent weeks in Calcutta, trying to calm the communal passions that inflamed the city. The previous year, he had attempted a similar campaign in Noakhali and failed. In Calcutta, however, he was successful. He achieved a similar goal in Delhi, too. His plan was to visit Pakistan for peace in 1948, but he would never make that trip. Five months after independence, Nathuram Godse, an ex-member of the Rashtriya Swayamsevak Sangh, would assassinate him. 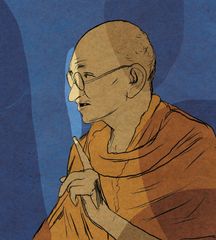 For decades after Gandhi’s assassination, both the left and the Hindu right in India continued to be ambivalent at best and critical at worst towards the deceased Mahatma. That changed, ironically, with the rise of the BJP—the leading steed of the sangh parivar.

The Indian left and its spokespeople perhaps realised that compared with Sanghi bigots, Gandhi had the safer mix of religion and politics. The Sangh and its affiliates had a more interesting romance with the memory of the real “Father of our nation”. In some part Sangh and BJP leaders realised that they would need the credibility of Gandhi’s name if their own questionable legacy had to be given some legitimacy, as they began to garner seats in Parliament. However, to get those seats, they found that they had to whip up the very sentiments that led to the assassination of Gandhi.

So, today, we find ourselves in the perverse situation where the BJP has 300-plus seats in Parliament, the prime minister (a former RSS karyakarta himself) misses no opportunity to pay homage to Gandhi, but raucous MPs from his party describe Gandhi’s assassin Godse as a nationalist and spokespeople of the BJP, on more than one televised debate, refer unctuously to Godse as ‘ji’.

The ghost of Gandhi haunts the Indian psyche because his values were the moral and spiritual spine of our idea of India, when we were not free. Gandhi’s uncompromising sense of morality is precisely what made him and continues to make him the moral epicentre of our collective conscience. He serves as a reminder of what we were meant to be. Gandhi serves as a reminder of that simple adage that makes life meaningful—that good triumphs over evil.

However, at a time when good and evil are mere numbers, and virtue is determined simply by counting the number of seats won in Parliament, the more convenient option is to eulogise Gandhi on international platforms and name him in government schemes back home.