Hussain made my Ganesh

India is a land of many things. But, above all, it is a land of festivals. I do not know if there is any other country in the world that actually celebrates so many festivals in a year (on a mass scale) as India does. It is one of the most heartwarming aspects of being Indian—we find so many reasons to celebrate.

As children, my brother and I had a rather transactional interest in festivals. We had little patience or desire to sit through long pujas. We always found the bodi (pigtail) of the pandit to be a source of great mirth. But we wanted to eat the yummy prasad and more urgently we wanted gifts. So our devious child minds made the connection with good behavior during pujas and festival treats. 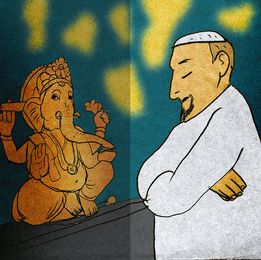 Our favourite festivals were the ones where we got good food plus gifts—Christmas topped the list and Diwali came a close second. We actually liked Holi the most, but since it yielded no gifts, and only gujias (a sweet dish), we struck it off our list of favourite festivals. Soon we found out that there are other festivals where children get gifts, like Eid, and sure enough we began negotiating with our parents that Eid must be celebrated at our house, too.

Our parents belong to diametrically opposite regions of India—a north Indian mother and a South Indian father. So all our festival celebrations had a mix of rituals. My Telugu father would celebrate (and continues to celebrate) Ganesh Chaturthi with a quiet puja and recital of the tale of Lord Krishna being punished for not praying to Lord Ganesh on Chaturthi day. He would make a tiny triangular mound of turmeric and sandalwood, carve out eyes and a symbolic trunk, and pray to this avatar of the elephant God. He would immerse the mound in water the next day and pour the water out on a tulsi plant in our garden. As children, my brother and I were not really convinced about this haldi triangle being the great Vigneshwara—remover of obstacles. And it took a lot of patient lectures on faith and symbolism to get us to accept this mound as a godhead. 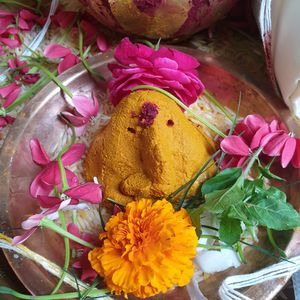 When I came to Mumbai, I began observing the festivals that my parents had celebrated—not for the gifts, but in an effort to carry that happy childhood and my parents’ home into this new independent life. On my first Ganesh Chaturthi, I was fumbling with how to recreate the Ganesh mound of my childhood, or any recognisable Ganesh. My driver Hussain saw my efforts and suggested that I try making it with atta (flour). I looked guiltily at him, and he realised that I had no skill with kneading the flour. Wordlessly, he took his shoes off, washed his hands and asked me where the atta was. That I knew!

I showed him, and soon enough there was perfectly kneaded wheat flour waiting to be shaped. Hussain took over. He shaped a dumpling like Ganesh from atta and skilfully added ears, trunk and small hands. That finished, he asked in Mumbaiyya twang, “Puja ke liye phool maangtaa hai na? [You need flowers for puja, right?].” I nodded. He left and reappeared ten minutes later with flowers, betel leaves, haldi, kumkum, camphor, cotton wicks and a small diya. Clearly he had no faith in my abilities to conduct a puja. He stood at the back respectfully as I chanted the few mantras that I remembered from my childhood and then played the popular Marathi Ganesh bhajan, Sukh kartaa dukh hartaa, from YouTube as I did a small aarti. He folded his hands as I handed him the laddus I had got as prasad. Then he left to resume his actual duty.

Hussain had not said Jai Shri Ram or Jai Ganesh once. But he is the one who brought Ganesh Chaturthi to my house in Mumbai. And that, for me, is the magic of festivals in India.