I have been a bit bemused by the reputation I have acquired in our country for wielding difficult words, especially because most of the time I was not doing so deliberately or for effect. I happened to know the words in question and thought they were the most apposite for the thought I was seeking to convey. But after my usage of ‘farrago’ spiked a huge surge in searches on the Oxford English Dictionary website, the label stuck. And one enterprising publisher suggested I make a book out of it.

The title—Tharoorosaurus—was coined by Meru Gokhale of Penguin India, who proposed the idea for this book in the rear seat of a taxicab in Jaipur as we were heading to an event of the famed literary festival there. It was her idea of pitching me a book whose title would combine my name with the words ‘tyrannosaurus’ (since so many are terrified of difficult words) and ‘thesaurus’ (since people want to be able to look them up). I laughed it off then, but she persisted. I began to think it might be fun to do after all, and the result is my latest book. 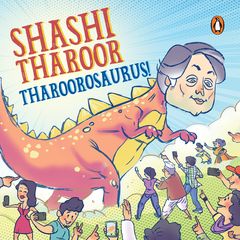 It is not a scholarly work; I am neither a trained linguist nor philologist, and I have no pretensions to being a qualified English teacher either. It is rather the work of someone who loves words, has loved them all his life, and whose cherished childhood memories revolve around word-games with a father who was even more obsessed with them than I am. My father, Chandran Tharoor, was everything to me—teacher, guide, research adviser, imparter of values, my source of faith, energy and self-belief. My enthusiasm for life and appetite for learning are inherited from him; so is my workaholism, and my love for words.

My father was a Scrabble addict and played every word game that had been invented, including Boggle and the acrostics in newspapers. He would play games with my sisters and me where we would try to see how many words of four letters or more we could make from the letters in a nine- or ten-letter word. He invented word games for family car journeys, where one passenger had to imagine a five-letter word and the others had to guess it within 20 attempts by trying out five-letter words and being told how many letters matched with the secret word. His fascination for words had to rub off on his eldest child—me!

But it was not just words for their own sake. My father instilled in me the conviction that words are what shape ideas and reflect thought, and the more words you know, the more precisely and effectively are you able to express your thoughts and ideas. In addition, he delighted in the way words could be put together, their origins and shape and letters of which they were made, and how they could be used. I collected words the way another kid might collect stamps, but not by looking up a dictionary—quite simply, by reading. My whole life I have read as widely as possible, and when you see the same word being used in multiple contexts, you start to get an idea of its meaning through the way it is situated in the text.

There are 53 short essays in my book that delve into the etymology of each word and narrate anecdotes about its usage, literary citations and nuggets of history. There was no particular reason for the final choice of 53 words—they were either words I had recently used in a tweet (like ‘farrago’ and ‘kakistocracy’), or words that the country was suddenly hearing a lot more often than usual (like ‘pandemic’ and ‘quarantine’), or words in the news (like ‘impeachment’ and ‘apostrophe’), or just words that I could tell interesting stories about (like ‘curfew’ and ‘defenestrate’). I have tried to make each word interesting in its own right.

If Tharoorosaurus imparts to its readers some of the pleasure and delight that words have long afforded me, its purpose will have been amply served.