Siren-salute to a divine act

When he took a siren-blaring cavalcade of 35 cars and 60 motorcycles around Gurdwara Bangla Saheb, Delhi Police Deputy Commissioner Eish Singhal did not know that the Prime Minister was watching. A few hours later, Narendra Modi tweeted a video clip of the show with the words: “Good gesture by the Delhi Police. Our gurdwaras have been doing exceptional work in serving people. Their compassion is appreciable.”

Didn’t get the drift? Hang on.

The Bangla Saheb is a principal gurdwara located in the heart of Delhi, just an arrow-shot away from the Parliament House in the south and Connaught Place in the north. When the gurdwara managers heard that thousands of destitutes were going without food because of the lockdown, they called them to the vast premises of the shrine and offered free food. They have since been feeding about 75,000 people every day. The shrine has also given away its guest houses and inns for the doctors and nurses in nearby hospitals to stay. The motorcade was just a gesture by the Delhi Police to honour the shrine and the spirit of philanthropy that inspired the devotees who fund the free food programme. 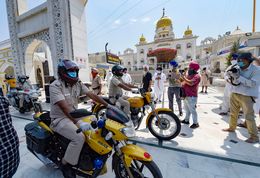 Not that other shrines are all shut up. Indeed they are shut for worship, but several temples, mosques and churches across the country have discovered that manav seva is madhav seva, and have been feeding the poor or lending their sacred spaces to run quarantine quarters, isolation centres, and treatment wards. The cash-rich few are donating funds.

But not as universally as the Sikhs are doing. As the Prime Minister tweeted, the Sikh shrines “have been doing exceptional work in serving people”. While the Bangla Saheb is leading the way, other Delhi gurdwaras, too, are running langars or free kitchens for about 1.25 lakh people every day. So have been the gurdwaras across Punjab and most of north India.

Free kitchens have been there in several Indian shrines, but it was Guru Amar Das, the third guru, who institutionalised it as part of the Sikh faith. Not only did he want the community to take care of the needy, but he believed interdining would break caste, class and communal barriers among devotees. Impressed, Emperor Akbar once sat cross-legged in a langar to dine with the soiled and toiling folk during Amar Das’s guruship.

With all shrines being Covid-closed to worshippers, perhaps it is time other faiths followed suit. As Gandhi said, “There are people in the world so hungry, that God cannot appear to them except in the form of bread.”

Tailpiece: The Bangla Saheb owes its origin to a similar act of kindness during an epidemic.

Before he passed away in 1661, Guru Har Rai, the seventh guru, had ordained his five-year-old younger son Harkishen as his successor. Elder son Ram Rai contested this, and sought the intervention of Emperor Aurangazeb. Knowing that the Sikhs would refuse the summons, the ace diplomat Raja Jai Singh offered to mediate.

Jai Singh persuaded the guru to travel to Delhi as his guest, and stay in his bungalow in Jaisinghpura, then a suburb of Delhi near Raisina village, which was his fief. The adulation that the guru received on the way and in Delhi convinced the emperor that the Sikhs preferred him to Ram Rai. When a smallpox epidemic hit the city, the guru and his men began tending and feeding the sick populace. Soon the guru himself fell victim to the disease and died in 1664.

Jai Singh donated the bungalow to the Sikhs, which they converted into a gurdwara. Folk history has it that the name Bangla Saheb is derived from the word bungalow.