Some people are better kept as enemies. They make more trouble for you as friends. Donald Trump is one such.

Only one and a half months ago, he had been feted in India much like a king-emperor, complete with a durbar in an Ahmedabad stadium. Now he has got buddy Narendra Modi in quite a spot over the export of hydroxychloroquine—an anti-malarial drug which is given as prophylactic to health workers handling Covid-19 patients.

When Covid-19 broke out in China, India was among the first countries that took precautions. Modi banned flights from China even before the World Health Organization told him to. Most of Europe and America, apparently thinking this was another of the dirty diseases of the exotic east, went on with business as usual, singing away in the spring like the grasshopper in the Aesop fable.

Not that we did not have choruses. Modi did make us play a few balcony scenes. Probably a few played Romeo-Juliets, too, in the candlelight shadows. Through all his sound-and-light pantomimes, Modi really worried that there was a reasonable chance of the disease spreading in India, too. With 130 crore people to look after, he thought he would hoard, much like the ant in the fable, a few million strips of hydroxychloroquine. After all, India produces two-thirds of the world’s stock, and no harm if we kept the bulk of it once. 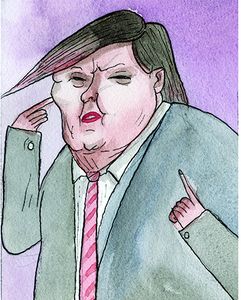 Europe woke up only after their princes, prime ministers and a few parliamentary worthies hit the sick bed, and a few thousand of the lesser mortals dropped dead. Even then Trump continued with his China-myna games, even calling the virus a Chinese virus.

Only after the bug bit the Big Apple, and began killing thousands across the New World, did Trump cut the comedy. First he banned export of US-made masks to Canada and Latin America. Then he began what European buccaneers did in the age of the Spanish gold—hijack ships headed for other shores and take them to his own ports.

French politicians accused the US of outbidding a consignment of face masks that had been ordered by France and loaded on cargo planes from China. Canadian Prime Minister Justin Trudeau asked his ministers to probe whether medical supplies meant for Canada had been diverted to the US. A German politico alleged that 2,00,000 masks meant for the German police were diverted to the US during a cargo transfer in Thailand.

Then Trump heard that buddy Modi had banned export of hydroxychloroquine. In a Sunday morning call, he told Modi that he would “appreciate your allowing our supply to come out,” and that if Modi “does not allow it to come out, that would be OK, but of course, there may be retaliation.” That sounded much like Don Vito Corleone speaking, though one is not clear how much of it was what Trump actually told Modi.

Poor Modi obliged. It is another matter that he would have, even if Trump had made a polite request through diplomatic channels. India has always gone to the aid of friends, and even foes, in need. When our coasts were reeling under the knockout punch delivered by the 2004 tsunami, our ships were sailing to Colombo and Male with food, clothing and tentage. When hurricane Katrina laid waste much of the American southeast in 2005, Manmohan Singh sent a gift cheque of $5 million and 25 tonnes of blankets, bedsheets, gloves, masks and lotions. When an earthquake hit Pakistan-occupied Kashmir in October 2005, we sent the Indian Air Force’s Ilyushin to Islamabad with blankets, tents, foods, and drugs.

All those were given without asking, let alone threatening. But then, as a Danish proverb goes, a boor remains a boor even if sleeping on silken pillows.