Sorry, sir! They want some more

In his month-end Sunday Mann ki Baat, Narendra Modi apologised to the people for putting them all into this three-week lockdown. Those who have jobs and salaries didn’t need an apology. For many, it is a paid holiday spent watching TV, posting WhatsApp videos, playing board games, reading books or fighting with spouses.

The apology was to the poor. “I specially apologise to the poor and financially weaker sections who would be probably thinking what kind of a prime minister is Modi,” he said. “It is possible that the poor would be angry with me for taking such steps.”

Tendering apology, or seeking pardon, is not an Indian trait. Not Modi’s, anyway, as his critics would say. Most Indian languages have no folk phrase for ‘sorry’ or ‘excuse me’. Khed hain and kshama kijiye are there, but those are too artificial, urban and, as most people think, used only by TV news readers after their tongues slip. The first phrase in Hindi that many in the south learnt was rukawat ke liye khed hain. That was in the early days of Doordarshan when transmission used to be interrupted as frequently as we have commercial breaks these days.

The terms may be there in our tongues, but not on our tongues—not in our popular culture, lingo, or native phraseology. Not that we are any less refined in manners than the westerners. In the west they drop these phrases at the drop of a hat, a teaspoon, or a hundred-dollar crystal vase. When they say sorry, it is not that they are really sorrowful, but only mean, ‘well, it happened; but don’t hold it against me.’ When they say ‘excuse me’, they are not seeking your pardon, but only asking you to stop what you are doing and listen to them. 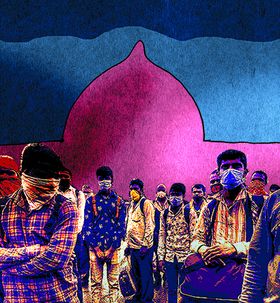 Why am I saying all this in these Covid times? Hold on.

Modi tendered an apology because he sinned. Not only the prime minister but most of our rulers sinned—Central and state ministers, secretaries, department heads, MPs, mayors, city fathers, town councillors, and we, the middle class, too. With few exceptions, of course. We all went into a shutdown without sparing a thought for those who can’t shut themselves down.

Many had come from distant hamlets that exist beyond the horizons of our imagination—Bengalis who cook for Kerala, Purvanchalis who scrub-clean Delhi and Mumbai, Oriyas who polish Surat’s diamonds….

Soon after Modi called for a three-week lockdown, they began running away in hunger and away from hunger—some walking hundred and more miles and a few falling dead on the road. Indeed, Delhi’s city government promised them free rations and double rations, and UP offered money in their accounts.

Where the regimes failed was in reaching out. Teams of teachers, municipal staff, policemen, health workers and NGO busybodies could have been sent around in jeeps announcing free rations, and where to get them. Camps could have been set up in schools, temple premises, gurdwara langars, churchyards, community halls, medieval forts (Delhi’s Old Fort was one such huge camp during Partition) and food courts of shopping malls. Vehicles could have been sent out offering them free rides to the camps.

India has managed the Covid contagion fairly well. But is India failing its poor?