Our foreign office mandarins say, Narendra Modi invests a lot of energy in personal diplomacy. Don’t we know? He almost plucked out poor Portuguese President Marcelo Rebelo De Sousa’s arm in a long and almost violent handshake last week. Britain’s Prince Harry had his hand held in such a grip that one could see marks on the back of the princely palm long after Modi let him go.

Indeed, Modi’s handshakes and hugs have an energy of their own, and they are going viral. The world is now waiting with bated, and virus-masked, breath to see how Modi will greet Donald Trump. Will he shake the POTUS’s hand for a longer while than he shook De Sousa’s? Or would it be a bear-hug, known in ancient India as Dhritarashtra’s embrace? After all, getting the US prez in a bear-hug isn’t such a bad idea. 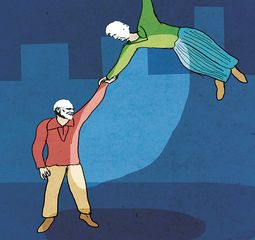 Diplomacy is as much about such camera moments as about in-camera talks—about trade treaties, tariff walls and tank deals. It is when they have nothing to tell us about the in-camera stuff that our South Block worthies wax eloquent on symbolism of visits, significance of gestures, commonality of interests, time-tested ties, personal chemistry between the principals and so on. Imagine what would have happened if phrases like personal chemistry were used in the era of Leonid Brezhnev and Indira Gandhi. A few cluster bombs would have gone off.

Take it from me, we will hear a lot about personal chemistry, body language and time-tested ties during the Trump visit. Because Team Trump is talking tough on a lot of trade-and-tariff stuff in-camera.

Calvin Coolidge famously said that America’s business is business. That was in the 1920s. But the presidents from Franklin Roosevelt to Barack Obama forgot it and have been leading America into global minefields— waging world wars and cold wars, brokering peace deals, containing the commies, balancing the Europeans, bankrolling the NATO, foisting tinpot tyrants, exporting democracy and policing the globe.

Three things hurt Trump and Co. One, all these are at the cost of Americans’ tax money. Two, America has been giving up much of its business to the Japanese, Chinese, East Asians and Indians for gaining strategic leverage in their regions. Three, many of the beneficiaries, claiming to be developing countries, have been getting away with higher tariff walls against American goods. All of them sell more to America but buy little from America. If they have the bucks to buy American warjets and warships, why can’t they also let in Walmarts, and buy walnuts, almonds, cheese and butter from America?

As Trump declared in Davos two winters ago, “America is open for business.” For both guns and butter. Will Modi take both?

Tailpiece: Not just hugs and handshakes, the world has also seen statesmen patting the hosts’ cheeks. Ayub Khan did it to Lyndon Johnson once. So did Dr S. Radhakrishnan when introduced to Mao in Beijing. Then he put Mao at ease saying, “Mr Chairman, don’t be alarmed. I did the same thing to Stalin and the Pope.”